The Shape And Size Of Courage

Without authors and illustrators willing to research our historical past, many windows into these time periods remain closed.  Their efforts deepen and broaden our views beyond textbooks.  When their focus is on people and places in realities other than our own, their books are like a time machine we can hold in our hands. 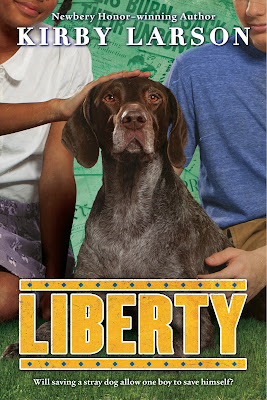 In her series Dogs of World War II author Kirby Larson takes specific aspects of the war enlightening and captivating readers.  She begins with Duke (Scholastic Press, August 27, 2013) acquainting us with the Dogs for Defense program where family pets are trained to assist soldiers.  In Dash we become a silent member of the Kashino family as they are sent to Japanese incarceration camps. In both books children have to relinquish their best friends, their dogs.  Her third companion title, Liberty (Scholastic Press, October 11, 2016) takes us south to the city of New Orleans in the year 1944.

Thomas Edison said, to invent, you need a good imagination and a pile of junk.  Fish Elliott had both.

Fish Elliott also has a next-door neighbor Olympia who is more than willing to offer assistance and sage advice whether he wants it or not and an older, resilient and determined sister Mo, who has sent him to the market for green beans.  The green beans are a favorite food of Seaman Roy Weathers who has been visiting their home quite often lately.  What Fish Elliott does not have is a dog.

On the way home from the market a nasty neighbor, Mr. LaVache, yells out to Fish, asking him if the dog is his.  Turning around Fish sees a dog following him; until the man throws rocks at her and threatens to kill her if he sees her again.  Fish's life is about to change.  Far away in Africa a young German soldier, Erich Berger, is about to experience a change too.

Fish has been working on a trap to catch a critter nibbling too much on Miss Zona's, Olympia's grandmamma's, garden.  He has even created a model with a cigar box, some empty spools of thread and couple of Olympia's hair ribbons to figure out a trap door.  As you may surmise his plans have altered.  A dog needs to be saved.

Intertwined in Fish's efforts to help the dog, that he has named Liberty, are the everyday but hardly ordinary lives of people in his city.  There is the huge influence of Andrew Jackson Higgins, the manufacturer of the "Higgins boat" or LCVP (Landing Craft, Vehicle Personnel).  Mo works for him and Roy is being trained by Captain McDerby to navigate these boats.  Critical to the story is Fish having polio when he was young, leaving him with a limp, and Olympia's African American ethnicity.  With each incident the tension mounts as to whether Fish will get Liberty (with help from Olympia and others) and be able to keep her.  As all the elements and people come together in one breathtaking moment after another, you will be unable to stop thinking about this story and the multiple conclusions.


Once started (at 3:30AM yesterday) there was nothing, not even an essential appointment, that was going to keep me from finishing this latest title by Kirby Larson.  Everything was put on hold until I knew the resolution of Liberty.  In thinking about this book, I found it to be about courage.  Mo's courage to pursue her dream of becoming a engineering draftsman and maintaining a home while her father is away overseas fighting, Roy's courage to go into battle far from home, Olympia's courage to always be strong in the face of prejudice, Erich Berger's courage to do the right thing regardless of the consequences, and Fish's courage to champion for a stray dog and to keep working to walk with greater ease.  It is as if each of them are fighting battles but not doing so in isolation.  Larson heightens our involvement with the mix of narrative, spot-on conversations and the alternating chapters giving us glimpses in Erich Berger's current situations.  (If you think I am going to share what a German soldier fighting in Africa has to do with a boy, a dog and New Orleans, think again.  I will not.)

When I turned the last page, I felt an overwhelming sense of respect for Kirby Larson's ability to fit all these characters together to create a stellar story.  You can't help but be transported to 1944 New Orleans with her meticulous attention to detail which does not weigh the story down but lifts it up to excellence.  The specific brand names of food, the common colloquial phrases, methods of transportation, clothing styles and vivid descriptions of the climate, the heat, humidity and storms surround you.  Here are some sample passages.

"It'd go faster if you let me help."  she slipped through the narrow opening in the fence.  If they had been allowed to attend the same school, that loudmouth in his class would've called her String Bean.  Olympia's grandmamma, Miss Zona, says that Olympia had to turn around twice to catch her own shadow.

She should mind her own beeswax.  Roy was okay, but Fish had set three places at their dinner table too many times lately.  Roy said Mo's cooking was better than anything he got at the Navy base.  Why a lightning bolt hadn't struck him dead for saying that, Fish had no idea.  His sister could change the oil in a car, rotate a set of tires, and replace a worn clutch, but cooking edible food seemed beyond her.  If Miss Zona hadn't sent over a plate of gumbo or some red beans and rice once in a while, Fish and Mo might have starved to death.

A funny feeling came over Fish.  Soon, Roy wouldn't be doing practice runs or tourist trips on the lake here.  He'd be on a ship, maybe heading to the Pacific.  Steaming to danger.
Roy caught Fish looking at him and gave a thumbs-up, Fish returned the gesture.  Then Roy circled his finger in the air, asking, "Ready to head in?"
Fish shook his head.  Out here, the war was at bay.  He liked that feeling.
Roy grinned and the engine roared; he pulled out of the circle and cut through the water like a great shark.  Fish lost his balance and grabbed on to one of the exposed ribs.  The energy of the boat's thrust pushed him back, but he found a way to lean on his good leg.  Wind whipped around his face, making his eyes water, ruffling his hair.  He felt like Errol Flynn in one of those pirate movies.   ...

"Olympia?" He let himself into the pen.  "What are you doing out here?"
"I heard Liberty crying."  She had her arms tight around Liberty's neck.  "She hates lightning."
"I think it's the thunder, but you're right.  Storms scare her."  He shivered as rain pelted his back.  "Let's go in the shed."
He clipped on the leash and the three of them made their way inside, watching the fingers of lightning through the one window.  Fish made a lap and Liberty curled up in it as best she could, trembling.  Fish stroked between her eyes; the book said that was calming to dogs.


All three of these titles are must reads in my way of thinking and all will leave lasting impressions but this book, Liberty, written by Kirby Larson is my favorite.  At one point I burst into tears of relief and happiness realizing I had been holding my breath.  There are many talking points within this story; the historical events and people's attitudes and outlooks in general, then and now.  I give this my highest recommendation.

To learn more about Kirby Larson and her other work, please follow the link attached to her name to access her website.
Posted by Xena's Mom at 8:23 PM