How Does The Garden Grow?

As any horticulturalist, farmer or gardener will tell you it's a combination of factors which contribute to the growth of plants.  Soil, moisture, nutrients, light and heat play critical parts in its health.   Depending on the hardiness of the plant even the slightest variance can cause a change.  The one constant is a specific seed will produce a particular plant. 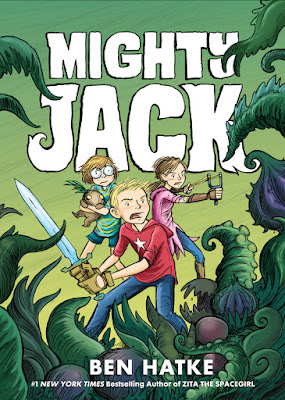 Several hundred years ago a tale was told of a young man who traded the last item of wealth he and his widowed mother owned for a few beans.  In an extraordinary twist on the expected within the magic found in fairy tales, the beans when planted grew into a gigantic stalk twisting skyward to vanish in the clouds.  Depending on the selected version of Jack and the Beanstalk adventurous quests follow, eventually leading the lad back to his home.  Mighty Jack (First Second, September 6, 2016) written and illustrated by Ben Hatke is the first in a new series of graphic novels about a modern day Jack, his younger sister Maddy and their friend Lilly.  It's a heart pounding variation with page turns which will leave you gasping and then grinning.

Summer vacation has started but for Jack it won't be typical.  To begin he will be getting up early to take care of his non-speaking sister Maddy to help his mom who is now working two jobs to make ends meet. On their way to a flea market he notices a new girl in their neighborhood practicing with a sword and shield in her front yard.

Distracted at a booth selling books, Jack loses sight of Maddy only to find her at the stall of a clever, wily stranger.  He knows Jack's name, claiming Maddy told him. Several odd things happen here involving a less-than-ordinary gizmo, the man's female companion and the stranger's insistence Jack trade his mother's car keys for a box filled with seed packets.  Against all reason, Jack makes the trade.  After all...Maddy told him to do it.

Fortunately hours later the car is recovered far from the family's home.  In the morning Maddy insists they overturn dirt in the back yard and plant the seeds.  The next morning they continue work in the garden. The seeds have started to grow. The results are weird. An introductory visit from Lilly, the sword-wielding girl, does not end well when some of the plants start scooping up mud and throwing it.  Only Maddy witnesses this.

The next morning everything in Jack's and Maddy's world gets turned upside down and inside out.  The garden is enormous and it's growing things which move, fight and like to chew on humans; doll like onion people, giant melons with even larger mouths and jagged teeth, and pods with power...jumping power.  Just when you think it could not get more fantastic, it does.  Maddy walks into Jack's room late at night several days later with an announcement.

A midnight rendezvous provides answers and questions.  A misadventure the following day ends up with a visit to the hospital.  Lilly has a secret.  Maddy has a secret.  One will be needed to vanquish the other.  Everyone changes.  A hero is needed.  A hero needs a companion.  Mighty Jack is born.


When Ben Hatke begins this narrative with a nightmare, you can already feel the tension start to build.  As smooth as silk he introduces the acquisition of not a few beans but a box full of seed packets, one of the packets containing something dark and dangerous. Each incident and conversation between the characters is a series of pieces fitting into a larger puzzle. (You could, and probably will, read the conversations between the characters over and over again.  They are as real as the wind and rain outside my home for the past three days.)  This is done with the flair of a master storyteller; you sense something growing, something more than the plants in the garden.

Each of the primary characters, Jack, Maddy, Lilly, Jack's and Maddy's mom, are presented with their strengths and flaws.  We feel deeply connected to them.  There is great affection between Jack, Maddy and their mother.  The appearance of Lilly, skilled through her older brothers' love of Renaissance reenactments, is timely, making her a perfect partner.  We have questions about their neighbor Mr. Gooseworth and his talk of Confederate gold.  We have even larger questions about the stranger and his companion at the flea market.


According to the information provided the illustrations

The image on the front cover crosses the spine to the left, the back, the growth of plants dividing the page in half diagonally with six other Hatke titles shown at the top. The introduction to the three main characters is an exciting glimpse into the story but is truly only a brief look at the marvelous adventures contained within this book.  The dedication and acknowledgements give us inside knowledge as to how this story will unfold. They let us see inside the heart of the book's creator.

The panels on each page vary in size supplying readers with pacing.  Each panel is usually framed with an equal amount of white space.  Hatke does include many panels without text.  For maximum impact he shifts perspective and uses light and shading to excellent effect.  His two page spreads and larger images with smaller ones placed on top of them generate a "wow' factor.

I have so many favorite illustrations it is impossible to select only one but the wordless two page picture after Jack, Maddy and Lilly have consumed the pods is magic with a capital M.  The expressions on their faces are sheer bliss.  The body postures allow their personalities to shine. I would be willing to bet lots of readers will want to join them.


Mighty Jack written and illustrated by Ben Hatke is a spectacular series opener.  It's loaded with great dialogue, the right amount of mystery, edge-of-your-seat action and page turns which will take your breath away.  You simply can't read it once. It demands you read it repeatedly. I would plan on multiple copies of this title.

To discover more about Ben Hatke and his other work please visit his website and Tumblr pages by following the links attached to his name.  To view some of the interior images please follow this link to the publisher's website.  I believe you'll enjoy reading this recent interview of Ben at mcnallyrobinson.com.

As part of this blog tour we were asked to name some of our favorite adaptations of fairy tales.  I created a blog post on February 23, 2016, Celebrate National Tell A Fairy Tale Day 2016. In it I name twenty-four of my favorite titles.  Fairy tales are those stories which have been a part of my reading life the longest.  You can always find me hanging out in the 398.2 section of any library.  Please take a few moments to visit the other sites on this tour.