No one understands us better than our friends.  They stick with us through the proverbial thick and thin not because they have to but because they want to be there for and with us.  They are another kind of family. 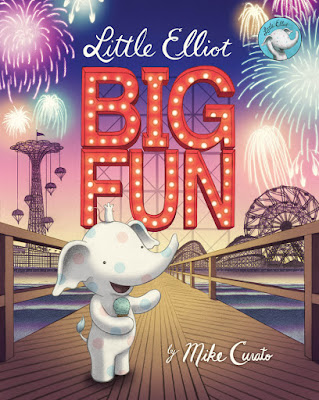 Friends share common interests like loving cupcakes.  Friends introduce us to new individuals, sometimes numbering in the hundreds.  A little more than two years ago an author illustrator presented to readers an unlikely but lovable pair of pals in his debut title, Little Elliot, Big City (Henry Holt and Company, August 26, 2014). His second book, Little Elliot, Big Family (Henry Holt and Company, October 6, 2015) featuring the pastel pink and blue polka-dotted small elephant, Elliot, and his friend Mouse touched readers with its focus on feeling alone in the midst of many but then realizing with a true-blue companion you will always have a family.  Little Elliot, Big Fun (Henry Holt and Company, August 30, 2016) written and illustrated by Mike Curato follows the duo as they spend a day at an amusement park.

Little Elliot and his best friend, Mouse, were heading to the far edge of the big city.

As Mouse talks of the boardwalk, shows, games and lots of rides, Elliot, champion lover of cupcakes, is questioning the presence of treats.  (You will hardly be able to restrain from smiling when Mouse cautions Elliot to stay close as they enter the park.)  Mouse, eager to begin enjoying the rides, asks Elliot if he wants to ride the water chute.  The elephant does not want to take a chance on getting wet or, even worse, falling overboard.  He can't swim.

When Mouse asks about three more rides, especially his favorite one, the roller coaster, Elliot offers up one excuse after another until there's only one thing on his mind, a treat.  Before he even has a chance to enjoy one big lick on his ice cream cone, two incidents have Elliot on the run.  He's too scared to stop when Mouse shouts.  The more he runs, the more frightened he becomes. How could Mouse think this excursion is fun?

Mouse finally finds a decidedly shaken Elliot down by the beach.  A little sun, sand and another ice cream cone do wonders for the panicked pachyderm.  Back at the park Mouse thinks he can make Elliot's wishes come true but he'll need to trust Mouse.

When our elephant friend finally uncovers his eyes, he (and readers) gasps.  A change in perspective can alter moments and moods.  That's what friends do for friends.


When Mike Curato writes about Elliot and Mouse we savor every minute of the story.  His flawless blend of narrative and conversation brings us directly into a scene while enlarging our comprehension of and compassion for his characters.  There isn't one of us who hasn't wanted to share something we enjoy with someone we love.  There isn't one of us who hasn't been frightened to try something beyond our comfort level.  Curato closes the story with a powerful thought, a thought which resolves these two issues with a whole bunch of heart.  Here is a passage from the book.

"Feeling better?" asked Mouse.
"Much better!" said Elliot.
"But I wish there was a ride that
wasn't fast or dizzy or wet."
"I have an idea," said Mouse.
Elliot was nervous but Mouse patted his head.


In this title Mike Curato expands his color choices, presenting us with an array of hues not seen in the previous two books.  There is a larger use of red, yellow, pinks, purples and blues. On the front of the dust jacket, with portions varnished, is a hint of the splendor to come and the shared joy between Elliot and Mouse. To the left, on the back, on a background of deep purple a portion of an interior image has been placed.  As in the two previous books, an ornate antique frame is around the ISBN.  The book case replicates the purple on the left side of the jacket.  On the front a small picture of Elliot and Mouse chatting on the sandy beach has been placed in the center. On the back a cheery character from the book, holding a bunch of balloons, is waving and looking at readers.

The opening and closing endpapers in red, yellow, white, black, brown, light teal, green and a tiny bit of pastel pink and blue are a splendid display of amusement park posters, fifteen in total.  Readers will undoubtedly pause to look at each one.  The verso and title pages feature a speeding train on the left leaving the city headed toward the sign Big Fun with Little Elliot in cursive above it.  Another sign, with Mike Curato's and the publisher's names along with a red arrow pointing right, is under Big Fun.

Placing these titles in the late 1930s gives us a sense of nostalgia but more importantly comfort.  Curato's illustrations are spectacular in historical accuracy, layout and design.  Rendered in pencil on paper and digital color in Adobe Photoshop many of the illustrations extend from page edge to page edge.  To accentuate pacing and a particular emotional state in the story Curato has elected to frame some of the pictures in wide white spaces.  There are several wordless visuals which are truly stellar; a series of nine small images on a white background visualize the prelude to Elliot's frightened run, a ring toss scene, a delightful two-page beach setting and a breathtaking double gatefold.

Readers will find themselves stopping at every page turn to appreciate all the details in lines, light and shadow, facial expressions and body positions.  Easter eggs, nods to family, friends and other kidlit authors and illustrators, are found throughout the book.  Everything about these illustrations invites you to read this book repeatedly.

One of my favorite illustrations is the wordless beach scene.  In the foreground a contented Elliot is seated beneath a blue and purple striped umbrella licking what has to be a chocolate-chip mint ice cream cone.  To his right is an elaborate sand castle with a draw bridge and turrets.  Mouse is at the tip top holding a small yellow banner.  Behind them is an array of people, of all ages and nationalities, enjoying the sun and sand.  Primary colors plus green are used in their attire.  In the background is a bit of a hint of things to come.


In the middle of a day hoping for fun, best buddies are struggling but friendship finds a way. Written and illustrated by Mike Curato Little Elliot, Big Fun is an endearing exploration of what matters the most in our life adventures. This title is going to be requested over and over and over again.

To learn more about Mike Curato and his other titles please visit his website and blog by following the links attached to his name.  At his website you can view numerous images from this title. On his blog several posts reveal his process and the origin of his Easter eggs.  There are also illustrations at the publisher's website.  At Scholastic's Ambassador of School Libraries John Schumacher's blog, Watch. Connect. Read., the cover reveal and earlier interview are included.  The must watch book trailer is premiered at BookPage.  Please be sure to visit the website dedicated to the Little Elliot books.  You are really going to enjoy this StoryMakers video chat at KidLit TV. Mike Curato is interviewed at Miss Marple's Musings and at the Illinois Library Association website.
Posted by Xena's Mom at 12:00 AM