For those people directly affected by a natural disaster or an epic event triggered by a single person or group of individuals, we cannot truly understand the depth of the emotional or physical impact.  As observers our response is based upon our own life experiences.  If we have a connection to those persons involved our reaction will be definitely heightened.

On the morning of September 11, 2001, as a nation our way of life changed irrevocably.  For those able we listened or watched in stunned silence.  In our elementary school, all staff maintained, as best as we could for the children, a business-as-usual kind of day.  At a subsequent meeting many of us were openly weeping at the staggering number of lives lost. 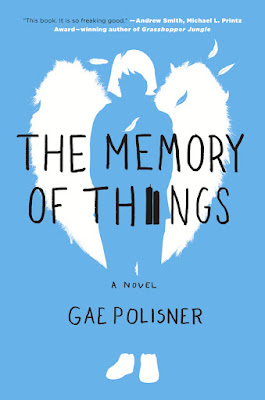 In six days we will mark the fifteenth anniversary of 9/11, the deadliest attack in history on the United States.  The Memory of Things (St. Martin's Griffin, September 6, 2016) by Gae Polisher provides an intimate portrait of two teenagers in New York City on that Tuesday morning.  As their two stories unfold and intertwine we are in the midst of their lives prior to and during the following four days.

Tuesday Morning, 9.11.01
BIRD
I move with the crowd, away from downtown Manhattan.
We travel swiftly but don't run, panicked but steady, a molten lava flow of bodies across the bridge.
A crash of thunder erupts---another explosion?---and the flow startles and quickens.  Someone near me starts to cry, a choked, gasping sound, soon muted by a new wail of sirens rising at my back.

Kyle Donahue, a student at Stuyvesant High School in Lower Manhattan is crossing the Brooklyn Bridge toward home, having been evacuated from his school building.  As he walks, stunned by seeing the collapse of the South Tower, he glimpses large wings on something crouched near one of the bridge's pillars.  Concerned it needs help, he turns around to go back, regardless of the urgings of others. What he thought was a bird he discovers is a girl near his age, looking as though she means to fly away.  She is coated in ash and dust with bits of metal in her hair.

Eventually Kyle is able to persuade her to come with him, making their way to his family's apartment in Brooklyn Heights.  Kyle's father is a detective with the New York City police and a member of the Joint Terrorist Task Force.  His mother and younger sister are scheduled to fly home from California this morning.  His uncle Matt, a former member of the New York City police department, is living with them recovering from a crippling accident earlier in the spring.  Kyle has no idea who the girl is.  She can't remember her name.

The girl's voice within the narrative is written in free verse.  At first there are only seemingly unconnected bits and pieces of memory she can gather.  As hours and days pass a more complete picture of the Tuesday morning and her past are revealed; an overwhelming loss, a special place, a lack of understanding and words said in anger.

Conversations between Kyle and the girl, his Uncle Matt, his dad and his mom when the phones work, and his Uncle Paul, also a member of the New York City police force, depict a very clear picture of family dynamics even though we still don't know who the girl is, why she was by the twin towers or where she lives.  Tension builds as one day stretches into the next.  Kyle is the anchor at home, taking care of his wheelchair-bound uncle.  He knows he should report the girl to missing persons or take her to the appropriate authorities but he also wants her to stay.  Kyle still has not told his dad about the girl.

When and if Kyle's dad comes home decisions need to be made.  Personalities of those important people in Kyle's life are no longer quite the same.  In those few days a boy and a girl bond in a situation not likely to be replicated in their futures.  There is much love.  There is much loss.  There is a great deal of fear.   Within the larger story of 9/11 individual stories weave together heading toward a conclusion readers could not have predicted.

Exquisite writing by Gae Polisner completely captives the reader from the first to final pages. (I read this book in a single seating.)  She supplies explicit details of the day to day events through Kyle's thoughts, his conversations with the girl as well as during conversations between family members.  The dialogue between all the characters rings true also revealing to us little by little the lives of each character and the values they hold in their hearts before and after that Tuesday.  We get a true sense of the shift in indivdual outlooks.  The past flawlessly flows into the present.

The choice to depict the girl's voice in free verse adds suspense to an already unprecedented situation.  We are privy to her temporary amnesia, her few and scattered recollections, which build little by little to longer phrases, more complete memories.  But Polisner does not allow us to understand, along with the girl, until near the end.  This is brilliant.

Another writing technique employed in this story is the use of parts, eight, instead of chapters.  Within each part are smaller sections denoted with several words or a single word.  This ties readers in a personal way to the text.   Here are some sample passages from the ARC I received.

Wait to fall
but don't
Am tethered here
Turn.
A boy shouts,
eyes full of terror.
He grabs hold of me
(an explosion
a ball of fire rising to the sky...
flames
everywhere).
Pull away from his grip, but he won't
let go.

And for one split second, as I look up at her, I forget about everything else except for her and me, and this moment.  About the two of us doing this silly little unimportant thing together.
I forget about the planes and the buildings and worrying about my dad.
I forget about Uncle Matt's accident, and that he's stuck in a wheelchair.
I forget the girl is a stranger, and I don't even know her name.
I forget about Jenny Lynch's dad and Bangor's uncle.  I forget about Marcus and civil wars in countries far away.
I forget that this day isn't normal, that yesterday wasn't normal, that the whole world as we know it has stopped; that's there's a weird, hushed pall across the city.  Across the nation.  And I forget that, at least here in New York, we don't know when---or if---it will ever be normal again.
For one split second I forget.

For those readers who can remember the events of 9/11 this story and these characters will become a part of those thoughts.  The Memory of Things written by Gae Polisner is an outstanding young adult novel; one you will want to read and recommend repeatedly. In an author's note at the end Gae, who lives with her family on Long Island, New York, speaks about her personal experiences before and after September 11, 2001.  Her final paragraph and her final sentence will long resonate.

To learn more about Gae Polisner please follow the link attached to her name to access her website.  Gae maintains entries on Tumblr.  At the Nerdy Book Club Gae reveals the cover along with comments by her, the cover designer and her editor.  At the publisher's website you can read an excerpt.

I was fortunate enough to hear Gae Polisner and Nora Raleigh Baskin speak at nErDcampMI 2016 in a session titled Healing Through Words: Two Authors discuss 9/11 and Coping with Tragedy through a writer's lens.  I encourage you to read the middle grade book, Nine, Ten: A September 11 Story written by Nora Raleigh Baskin.


UPDATE:  A teacher's guide has now been provided by the publisher.