Under The Moon's Gaze

Last night was a full moon night.  This moon is known as the Harvest Moon.  This special moon is closest to the autumnal equinox, the time in our year (in the northern hemisphere) marking the end of summer and the beginning of autumn.  This year the equinox falls on September 22, 2016.  On this date we will have an equal amount of daylight and darkness.

As parents, educators and those who share their lives with pets know, a full moon does dictate a change in behavior, in my experience, with children and dogs.  As the sun sets and dusk arrives, going to bed and falling asleep are not on their minds.  They are ready to continue playing...for hours.

One of the most popular of my Picture Book Ten for Ten posts is one listing ten plus one books guaranteed to encourage rest, sleep and Sweet Dreams.  Two titles have been released in 2016 which would make worthy additions to these selections.  They each invite readers into the presence of peace. 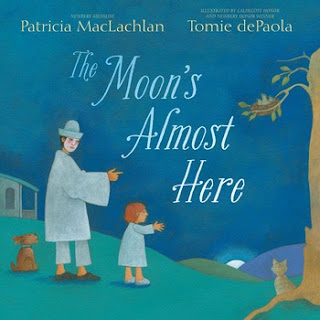 Two cherished personalities in the field of children's literature collaborate to bring us The Moon's Almost Here (Margaret K. McElderry Books, an imprint of Simon & Schuster Children's Publishing Division, June 7, 2016).  The blend of Patricia MacLachlan's words with Tomie dePaola's illustrations will rock away all the day's cares easing listeners toward dreamland.  Let's follows along with the mime Pierrot and his child taking a walk.

The moon's almost here!
Robin sings in her nest.
Babies fly back to her,
Ready to rest.

A sheep nods to her lamb, a hen chatters to her chicks and ducklings follow their mother from water to land.  A colt listens to the call of a mare. Calves trail behind their mooing mother.  And

A tiny winged creature takes flight hurrying in front of the night.  In the warm air beetles' bottoms blink.  At home, a pet settles, their eyes fluttering with dreams.  Another curls into a cozy ball of comfort.

A hand is offered for a final look outside.  Two stand, the younger speaking in gratitude to the night life.  The moon arrives casting her spell of sleep in a luminous glow of light.


The choice to repeat the first sentence over and over again, six times in total, soothes the reader and listener. The following phrases rhyme in a lullaby rhythm.  When you read the words aloud written by Patricia MacLachlan they ease into song, a soft sweet melody.  Here is another sample portion.


From left side to right across the spine on the dust jacket, an entire illustration of rolling hills, a countryside farm, depicts all the animals visited by the parent and child.  It's a gorgeous visual of life coming to rest welcoming the moon rise.  Careful readers will notice the change in the title text's color as it gets closer to the rising moon. The varying hues of blue and green with spot color and the white apparel, painted face of the parent and rise of the moon are part of the signature palette of artist Tomie dePaola.  On the book case an interior image of the mime Pierrot and his child going back outside to look at the moon is featured.  A lighter contrasting shade of blue covers the opening and closing endpapers.

Rendered in acrylic on gessoed Arches 150lb cold press100% Rag watercolor paper the pictures begin to tell a story of their own on the initial title page with the parent, arms spread wide, running to the right. On the title page, unlit lantern in hand he moves toward his child who is walking toward him with outstretched arms.  The remaining fourteen two-page illustrations are marvelous depictions of each stop on the duo's nighttime journey.

Each image is like an individual tableau; gazing upward at the fledglings flying toward the mother robin, a baby chick cuddled in the arms of the child as their father lights the candle in the lantern, the two watching the horses and cows through the windows of their home and the child carrying their cat as the dog looks outside.  One of the pictures, the child's bedroom, contains elements of Tomie dePaola visuals, a heart painted on the footboard of the bed and a checked border at the bottom of the page. There is an air of tranquility in each scene.

One of my favorite pictures is of the dog curled up on its bed on the porch.  A ribbon of stars swirls from his left across the gutter to the right.  He is dreaming of jumping over the moon.  The moon has a face with eyes looking upward at the jumping dog.

The Moon's Almost Here written by Patricia MacLachlan with illustrations by Tomie dePaola is a beautifully rendered poetic invitation to bedtime.  Readers can feel the calm from the pages settling around them.  The final illustration is sure to bring on a sigh if not sleep.  Please follow the links attached to Tomie dePaola's name to access his website and blog.  Each is a joyful depiction of the man and his work. 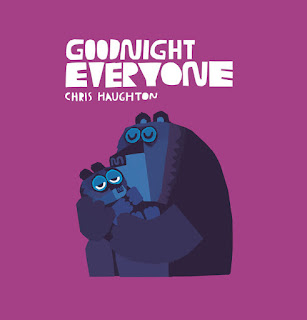 Known for his titles, Oh No, George! and Shh! We Have A Plan Chris Haughton presents readers with another of his colorful gems.  Goodnight Everyone (Walker Books, August 4, 2016 and Candlewick Press, December 13, 2016) is a sleepy stroll toward the best rest.  It's the end of the day.

the sun is going down and everyone is sleepy

Moving from the smallest creatures, mice, to one of the largest, Great Big Bear, each one is sleepy.  They exhibit their condition with yawning...lots of yawns.  There's one though who is not sleepy in the slightest, Little Bear.

No one wants to play with Little Bear.  Each time he asks his animal friends, the mice, hares and deer, they are simply too tired.  He continues to move around ready to play until...wait...what's that?

Little Bear yawns!  Great Big Bear believes it's truly time to end the day in rest.  Each of the animals is visited.  They are fast asleep, gentle snores filling the air.  A goodnight is called to each one.  A final gesture of affection is given to Little Bear.  The narrator calls out to readers and makes one final observation.


With his simple phrases Chris Haughton establishes a reassuring rhythm.  His use of repetition with certain portions of the narrator's remarks asks readers to participate in response. To further engage us, he adds a few new words to each set of sentences.

In a dreamy use of the number three we visit three animals three times; when they are yawning, when they don't want to play and when they are fast asleep.  The pause in this cadence is when Little Bear engages with Great Big Bear.  This is sheer delight.


If they were to remove Chris Haughton's name from the book case, by the design, layout and color we would still know it is his book. His use of purple, magenta and blues is striking. The inclusion of white in the title text and in the white of Little Bear's eyes on the front and in Great Big Bear's eyes on the back is a pleasing contrast.  I dare you to look at either of these images without feeling your body start to relax.  On the opening and closing endpapers are stunning depictions of first the southern night sky, replete with constellations, on the left and the sun and planets to scale on the right. On the top of the earth is the forest from this book.  On the back the planets and sun are reversed, top to bottom and on the right is the northern night sky.  Little Bear and Great Bear are faintly drawn with the corresponding constellations within their bodies.

On the initial title page Great Big Bear and Little Bear are seated.  The larger is yawning and the younger is wide awake.  On the verso and title pages is a vivid, layered image in blues, purples, magenta, greens, orange and yellows, spanning from left to right with a large white border.  It shows all of the animal groups peeking forth from their special areas.

With a page turn we zoom in on a portion of the title page image.  At the next page turn there is a great deal of white space on the left.  For each of the animals Chris Haughton has designed a small page, a series of three pages imposed on the large right page.  As each is opened the image increases in size.  For the remaining visuals they vary in size to supply pacing, each outlined in a wide white frame with the exception of one two-page illustration.

One of my favorite illustrations of many is of the mice sleeping. The picture takes up nearly one entire page with white space spanning across the gutter to the edge on the right, providing a place for the spare text in purple.  Shades of green fill the image of four mice curled in sleep in their nest.  One of the mice is leaning away from the others, its body resting on the rim of the nest.  The nest is stretched between stems in the grass. Above their heads a dandelion starts to lose its seeds, several floating away.


I can't imagine someone not falling asleep after reading Goodnight Everyone written and illustrated by Chris Haughton. ZZZzzzzz.... Oh, sorry....I dozed off for a moment.  Chris Haughton says at his website this is indeed a book about sleep but also a book about scale.  It is fascinating to read about the development of this book on his blog here.  On both his website and blog there are numerous images.  On the publisher's website is yet another image.