In The Darkness Dwells...

When you move into a new house, go to stay someplace else on vacation for a week or two or visit friends in their home for several days, it takes time to adjust to the room arrangements and where things are placed in those rooms.  If you are used to a light switch being on a certain side of a doorway when you enter a room and it's not there, it can be a little bewildering for a few seconds especially if it's dark.  It can be more disconcerting when you're in a strange room at night during a storm and the lights suddenly go out. 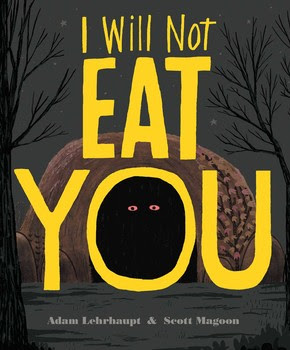 As you are trying to navigate in the total blackout your senses are heightened. You might see or hear something real or imagined.  I Will Not Eat You (A Paula Wiseman Book, an imprint of Simon & Schuster Books for Young Readers, September 6, 2016) written by Adam Lehrhaupt with illustrations by Scott Magoon is about a very specific dark place with a very particular inhabitant.  You are definitely going to be surprised several times.

Theodore lived in a cave.
It was a quiet cave,
and that's the way he liked it.

A chatty bird flapped its wings outside Theodore's cave one morning.  It made so much noise he wondered if the bird was offering to be his next meal.  There was not even the slightest inkling of emptiness in Theodore's stomach so he quietly told the noisy creature to leave.

After the bird left a howling wolf approached the darkened entrance.  Again the thought popped into Theodore's head about consuming this beast.  A little more irritated this time, he told the annoying canine to move away from his cave.  He was not hungry.

A third animal, one of the largest of the big cats, strolled up to the cave growling.  Theodore was certainly not hungry and did not like the noise.  He told the uninvited guest to go.  By now afternoon had turned into evening.

To Theodore's amusement (insert eye roll) a boy rode his toy horse to the cave and gave a loud roar.  By this time the state of Theodore's belly was changing.  In a loud voice, far from welcoming, he told the irksome child to skedaddle or he would, without a doubt, gobble him up.  What did this boy do in the face of danger?

What he did was the proverbial last straw.  Theodore raced from the cave in hot pursuit.  The boy ran. Theodore ran.  This went on until something extraordinary happened not once but twice. The results are quite unbelievable.  And the last line...be prepared to laugh out loud.


When Adam Lehrhaupt spins a tale, you know nothing is going to unfold exactly as you might expect.  In this book he lures readers into the center of the story with the three animal visits to Theodore's cave.  The musings of Theodore form a repetitious pattern with the dragon's replies showing his increasing exasperation. The short spirited narrative and dialogue are utterly perfect leading us unknowingly toward the surprises after the fourth "guest" or "entree" appears.  Here is a sample passage.

But Theodore wasn't hungry.
"Go away, loud wolf," he grunted.
"I will not eat you."
The wolf jogged away.


It's the darkest part of dark on the dust jacket; the varnished, bright, golden text (hand-lettered) accentuating the cave entrance with the menacing eyes.  What could possibly be inside that cave? To the left, on the back, among the forest foliage we see three more pairs of eyes, alluding to the appearance of these creatures in the story.  On the book case all is revealed during the light of an early spring morning in the future. All four visitors happily surround the cave opening.  The two glowing eyes look directly at us.  (Readers will notice the change in elements of the boy's attire.)  The opening and closing endpapers are vastly different.  On the first the forest scene is bleak in shades of black and gray like late November.  On the second the sky is awash in the color of new day.  The trees are full of leaves.  There are flowers around the cave.

Scott Magoon's digitally rendered illustrations begin to put a singular enhancement on the story on the verso and title pages. The blush of early morning in autumn in the forest greets readers in a two-page image.  All of the pictures span both pages, edge to edge.  By the change in the color palette for the sky and flora we see the shift in time of day and the seasons.  The eye color of Theodore reflects these differences.

In the one visual where all we see is the darkened interior of the cave, the ground in front and the eyes, the entire tension of the story is intensified.  It makes the approach of the boy more startling.  Carrying his stick pony, a shining flashlight, a shield (a garbage can lid with a star painted on it) and his wooden sword and wearing a blanket cape and muddy boots, he is the classic figure of a knight of the royal boyhood realm.  In keeping with darker colors, a shadow of Theodore gives us our first hint of his identity.

One of my favorite illustrations is for the moments before the double surprises are revealed.  On the left is a close-up of the boy's face. He's covered in muddy streaks and flowers.  His mouth is wide open.  In the beam of his flashlight we see the grandeur of the dragon, wings outstretched, tail behind the boy and standing tall.  Whiskers shoot out from either side of his nose. His eyes are full of amazement or amusement.  Flowers surround his head and face.  His mouth is wide open too.  The colors of black, hues of blue, white, golden yellow, red and brown make for a striking image.


I Will Not Eat You written by Adam Lehrhaupt with illustrations by Scott Magoon is a delightfully dark story which will leave you guessing more than once.  It invites participation with the reoccurring phrases.  You'll want to get your props ready to use this book in a creative drama storytime.

To learn more about Adam Lehrhaupt and Scott Magoon please visit their websites by following the links attached to their names.  Scott Magoon has numerous images on his site showing the illustrative process for this title.  At the publisher's website you can view six interior images.  Both Adam and Scott are interviewed by educator Dylan Teut about this book on his site Mile High Reading.  Scholastic News Kids has an interview with Scott Magoon.