In the tradition of Pueblo pottery artisans Helen Cordero made a doll in 1964.  This first storyteller featured a man inspired by her grandfather with five children on his shoulders and lap.  He had an open mouth; the words of a story ringing out toward his eager listeners.  In subsequent storyteller figures there might be a woman instead of a man with even more children and her eyes might be closed to bring the memory of her story to life.

If you've ever read stories aloud or told them to listeners, whether they are initially interested or not, you witness the transformation as the story wraps itself around those individuals.  They lean and move toward you until sometimes there is no room between you and them.  Their eyes widen.  They gasp, cry, laugh and sigh.  This is the strength of story.

Stories have the potential to soothe a frightful beast.  Dragon Was Terrible (Farrar Straus Giroux Books for Young Readers, August 23, 2016) written by Kelly DiPucchio with pictures by Greg Pizzoli is about a particular dragon in need of an attitude adjustment.  He's downright despicable. 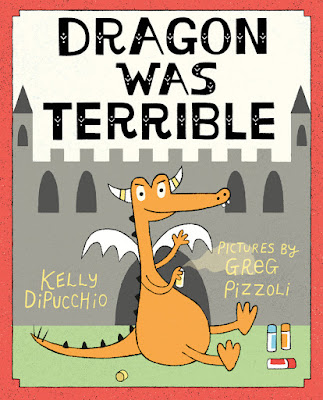 Dragon was terrible.  Naturally, dragons have a bit of terrible in them because they're dragons after all.

This dragon was not a normal kind of terrible but terrible times ten.  In the castle community he wrecked the gardens, was nasty to the palace sentries and it's unmentionable how the pastries were treated.  Wherever he went his manners were totally disgusting.

At long last the king knew something needed to be done.  He sent out a decree asking for the services of brave knights promising them a

If you think this was a success, think again.  Dragon grew worse.

The townspeople decided to send out a more emphatic message asking for assistance from everyone else.  As you may surmise, it was an utter failure.  And you-know-who was increasingly intolerable.

Finally a single boy had a plan.  (Marshmallows did play an important role.)  The ultimate success of the boy's endeavors relied on a single factor.  Do you want to know what that was?  It's a secret known since words were spoken.


An unseen narrator speaks in a knowing voice as if readers are confidants.  Kelly DiPucchio supplies extra comments sure to evoke grins and giggles from us.  The described actions of Dragon while vile will have readers laughing out loud.  It's the word choices and the sentences in which they are placed which lead us happily along to more than one wonderful conclusion.  Here is a sample passage.

That's not all.  He scribbled in books.
He threw sand.
And he took candy from baby unicorns.
Honestly, that's terrible.


Extending from left to right across the matching dust jacket and book case Greg Pizzoli creates for readers two sides of an identical castle wall.  On the back, to the left, three posters ask for help in ridding the kingdom of the menace.  Flowers are growing along the wall.  On the front sits the one and only BIG problem with mischief on his mind.  Obviously he can't wait to spread his own special brand of graffiti along the blank slate of the wall.  The opening and closing endpapers are in the same shade as the dragon's body.

Image size and framing perfect the pacing of the narrative.  Some of the illustrations span two or single pages edge to edge and other pictures are placed two on one page, covering a single page or double pages with edges framed in a single line with indented corners.  Most of the backgrounds are white; some containing the faint outline of a castle wall in varying shades.

The facial expressions on Dragon and the other characters are downright hilarious regardless of the mood.  Pizzoli interjects his own brand of comedy into the visuals with his interpretations of the text.  For the words

He chased fuzzy yellow ducklings around the moat,

Dragon is running after the baby ducks spaying them with a garden hose.

One of my favorite of many illustrations is of Dragon drawing faces on the drawbridge.  Using his trusty can of spray paint he's made a charming picture of himself and written DRAGON RULES.  He also has made a likeness of the king with the words

KING IS A BABY.

This is done on a chocolate brown background.


Dragon Was Terrible written by Kelly DiPucchio with pictures by Greg Pizzoli is a comical tale of terrible meeting its match through story.  It's hard to resist a tale well told, especially if the character connects with the listener.  To learn more about Kelly DiPucchio and Greg Pizzoli and their other work please follow the links attached to their names to access their websites.  They both maintain blogs here and here respectively.  To view interior images please follow this link to the publisher's website.   Kelly DiPucchio and Greg Pizzoli are guests at All The Wonders, Episode 281 with teacher librarian Matthew C. Winner. 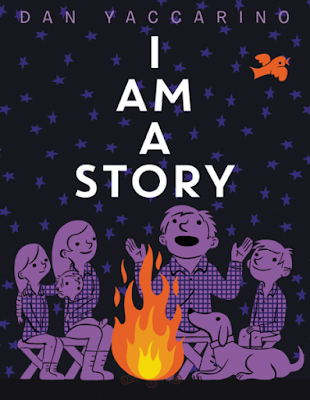 Stories have the potential to endure thousands and thousands of years.  They mirror people, places, and cultures in exquisite detail if we have eyes to see and ears to hear.  I Am A Story (Harper, an imprint of HarperCollinsPublishers, September 6, 2016) written and illustrated by Dan Yaccarino flows through the ages following humans in their quest to be remembered, understood and valued as individuals and collectively as a whole.

I am a story.
I was told around a campfire,
then painted on cave walls.

Under a darkened sky an oral tradition is born.  In order to never forget people begin to create tangible, tactile records of what they hear and experience.  Through time their methods and materials change but the spirit of their intent remains the same.

On walls large sweeping pictures become smaller images representing not moments but single words.  Tablets of clay make their recollections more portable.  Papyrus, paper and fabric hold stories.  Hands around the world work to preserve stories through printmaking and elaborately illustrated manuscripts.  The invention of the printing press changes everything.

Books are shelved in private libraries, then gathered in collections for everyone to use.  They appear in small spaces and travel to far-off places.  Technology expands, bringing stories to us first from radio then from computers.

Stories have stood the test of time surviving those who would remove them from our midst.  They create champions working for the good of all.  Wherever we go stories go also; even with a family on a camping trip, faces aglow from a fire, seated under the ever-present constellations.  Story is...always.

Personifying story is a marvelous choice by Dan Yaccarino.  Traveling through time seeing how the preservation of story has evolved through story's own simple sentences gives story power. The other technique employed by Yaccarino to end where we begin is an excellent example of the beauty of circle stories.


Beginning with his dust jacket Dan Yaccarino enhances his text adding another layer of wonder to his book.  The deep shades of blue in the sky and stars extend from right to left, front to back.  The use of complementary colors, the purple and hues of orange and yellow, illuminates his illustration.  All of the added elements on the front are varnished.  The bird in flight on the front is standing in the lower left-hand corner on the back under a crescent moon.  On the book case only the red bird appears in the starry sky, flying up toward the right-hand corner on the front.  The opening and closing endpapers are a series of fifteen panels signifying the delivery of story through time.

Using India ink on vellum for the images Yaccarino begins this story on the verso and title pages with two early people sitting beneath the moon and stars as the red bird flies under the title text.  Alternating between single page visuals and double-page pictures we are not only given a tour of the timelessness of story but we are given a history of storytelling, bookmaking, literature and mankind. We travel from caves to rooms with women using woodblock printing in ancient Asia and then to medieval walls in castles and on to monasteries and to a Shakespearean stage and to a little free library.

With each page turn one thing remain constant...story.  In some form the bird is always there.  Yaccarino's signature style creates scenes we can walk into by joining a group or working with an individual.  His people, their attire and architecture are fabulously appropriate.  His details bring us laughter and light.  In the two page picture of the king walking past tapestries with four knights at attention, one of the knight's eyes shifts toward the boy holding the king's cape.

One of my many favorite illustrations is of the monk, alone, painting a manuscript at a desk.  Behind him in shades of brown, green, yellow, orange and red are shelves lined with books.  He is wearing a robe in a darker hue of blue as he paints using a lighter blue.  In an open cupboard a cat is curled at rest.  A tiny mouse peeks from beneath his desk.  Crescent moons, stars and the bird can be seen in the room.


I Am A Story written and illustrated by Dan Yaccarino is a joyous celebration of a truly timeless constant in humankind...story.  For the colorful, meaningful images, simple text and powerful message this book comes with my highest recommendation.  To learn more about Dan Yaccarino please visit his website and blog by following the links attached to his name.  Please enjoy the book trailer which is premiered at Scholastic's Ambassador of School Libraries John Schumacher's blog, Watch. Connect. Read.
Posted by Xena's Mom at 11:47 AM