One of the things I remember most about my classroom years, kindergarten through high school graduation, is knowing the answers over and over again but being too afraid to raise my hand.  I was painfully quiet except when with close friends.  My solace was in books; books allowed me the freedom to be everything I felt inside on the outside as long as I was reading.

Upon finding out a speech class was required for all incoming freshmen in college, I felt true fear.  What saved me were grim determination and a deep desire.  Teaching was my passion.  If I was going to teach and teach well, this shyness had to go.  In our speech class we were given the opportunity to give our speech the week before it would be graded.  Every single time I not only elected to do this but also volunteered to go first.  To fulfill a dream I forced the fear away. 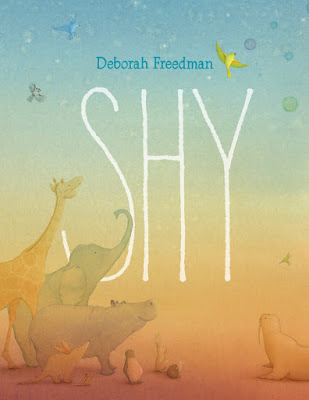 Reading a book about a character who views their world in much the same way we do ours, encourages us.  Shy (Viking, September 27, 2016) written and illustrated by Deborah Freedman is a book which calls to readers as soon as they see the title.  Let's answer the invitation!

Shy was happiest between the pages of a book.

Shy wanted to say something but what if he got tongue-tied or worse yet started talking a mile a minute without making a lick of sense.  While he was debating what to do, the bird flew away.  The bird and her song were so lovely, Shy finally made a decision.  He followed the bird.

The world, the vast wide world Shy walked through, was more beautiful than he had imagined.  He could hardly believe all the animals he was seeing.  Quite unexpectedly bird song filled the air; lots of birds' songs. Would Shy find his special golden yellow bird?  Then his heart filled with joy.  She was here.

He could hardly wait to speak with her.  Being in the presence of this bird opened a door long closed inside Shy.  Darkness came and all the birds left; Shy's happiness going with them.  He had waited too long. Returning home, Shy found comfort where he always had.  Would Shy hear the song he loved again?  And if he did, what would Shy do?


With nine carefully chosen words Deborah Freedman piques our curiosity. Who is Shy?  Why is he happiest between the pages of a book?  What do the words between the pages of a book mean in reference to this story?  With a page turn the following sentence completes the spell surrounding us with magic which never leaves, growing stronger sentence by sentence.  We care deeply for Shy whoever or whatever he is.

Two times we read Shy's thoughts as he gets close to speaking with the golden yellow bird.  We understand his desires and the dilemma he faces.  In a marvelous classic stroke of storytelling brilliance Freedman uses a third scenario to reveal Shy's identity and to unfold the results of a decision.  The song the bird sings

is true bliss to read aloud.  Here is a passage.

He made his way over acres and acres...
Shy felt like he was walking through one of his books,
though it was all far more wondrous
than it ever looked in pictures.


As soon as you open the dust jacket the natural color palette on the single image pulses with peace and quiet.  Nineteen animals of land and air are walking or flying toward and around the title text except for the ostrich with its head in the sand.  A tiny mole noses the ISBN.  (I am working with an F & G.)  Every delicate line and soft stroke of her brush works to create the essence of shyness.  On the title page using the same hues but slightly lighter,  Deborah Freedman has the golden yellow bird turning up the lower right-hand corner of the page as if to say...come, please read this story.  For the next three page turns various shades of the golden yellow are used as the narrator speaks about Shy.

On the third image the top book in the stack of volumes on birds is open to a scene of pale sky blue on white with the golden yellow bird flying from left to right.  When the bird becomes real in the next picture it's like we've zoomed in on the open book.  Freedman maintains variations on these golden yellow and blue colors until the animals and chorus of birds appear.  In a breathtaking change of background she adds rich, dusty reds and oranges as the sun sets. Her night skies are like a comfy blanket.

When the identity of Shy is shown to readers, they will gasp at his placement, color and what he says.  In fact, in every single visual, rendered with pencil, watercolor and bits of colored pencil assembled in Photoshop, all of the elements work to provide a sense of stepping into serenity as if it's a place instead of a state of being.  Details like the faint titles on the spines of the books, notes of songs shown as circular bubbles and the birds in full color with the other animals watching them in more muted tones work to give readers masterful illustrations.

One of my favorite images of many is when the focus of the picture is on seven birds.  It is when Shy discovers his golden yellow bird is present and singing.  Eight faint large circles are positioned around them.  Beneath them, much smaller in scale, readers will be able to find ten animals gazing upward, all of them happy to see and listen to the birds.  The background is pale blues, greens, yellow and brown in overlapping sloping hills.  You want to walk right into this picture joining the animals.


A timeless tale of being afraid but finally willing to follow what you want most, Shy written and illustrated by Deborah Freedman will resonate with readers of all ages.  It's the desire to express your love of something or someone which will give you the confidence you need.  You can't put a price on the reward which fills your heart. The pacing in the text and illustrations and the manner in which they enhance one another is stunning.

To learn more about Deborah Freedman and her other work please follow the links attached to her name to access her original and more recent websites.  You can view my favorite picture and another image at author, reviewer and blogger Julie Danielson's blog Seven Impossible Things Before Breakfast.  There's still time to visit this very special website dedicated to Shy.


UPDATE:  Deborah Freedman wrote a post for the Nerdy Book Club on September 25, 2016 about this title.  She speaks about her idea of a book; every inch available to an author and an illustrator.

UPDATE:  Deborah Freedman is a guest on All The Wonders, Episode 291 hosted by teacher librarian Matthew Winner.
Posted by Xena's Mom at 7:44 PM