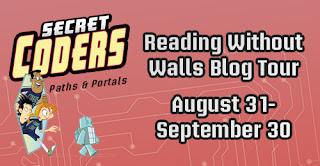 When you understand a pattern, method or equation, the mystery of numbers disappears.  In a world full of uncertainty, the realm of mathematics is reliable and steadfast.  It is the foundation of numerous technological advancements and creative wonders. 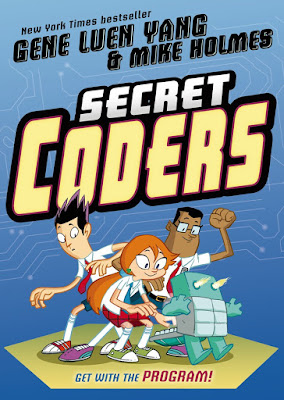 Computers function using a binary system; only the numbers 0 and 1 are used in a variety of combinations.  This is how code is written to give instructions.  On September 29, 2015 an engaging new graphic novel series was introduced to readers, Secret Coders (First Second, an imprint of Roaring Brook Press) written by Gene Luen Yang with illustrations by Mike Holmes.

Readers along with Hopper will wonder why the best school, Stately Academy, in town looks creepy enough to be a haunted house.  It's hard enough to be the new student but nothing about this place gives off good vibes beginning with a janitor looking like he's from the set of a horror film.  Three fellow male students making less than friendly remarks do nothing to make Hopper feel welcome.  In fact, she's mad as a hornet.

A locked shed, a turtle robot, programs, steps, degrees, and numbers create a very suspenseful evening for Hopper and Eni.  (Think of an Alfred Hitchcock movie with a lot of flapping wings.)  A mishap at lunch lands Hopper in the office with Principal Dean and another conversation with Eni heightens the eeriness of this school.  A secret stairway leading underground, an encounter with Mr. Bee, the strange janitor, a mention of her vanished father and a challenge to Hopper, Eni and Josh (another of the guys who appears uninvited) conclude this first volume in what is surely a cliffhanger.


Beginning where we left our characters at the end of the first book, on August 30, 2016 Secret Coders Paths & Portals (First Second, an imprint of Roaring Brook Press) was released.  Readers will hardly be able to wait to open this second volume to see if their answers match those of Hopper, Eni and Josh.  No one will have been able to predict the outcome. 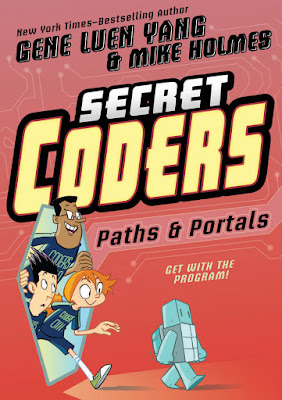 In a puzzling twist of events it is revealed that Stately Academy is built above another long abandoned school in which someone currently worked at the academy is not who they seem to be.  A host of robots of varying sizes (turtles to be exact) in combination with a set of basic Logo commands portray the beauty to be found in programming and the problems.  Another untimely visit to Principal Dean's office plus the appearance of the rugby team members puts Hopper on notice.  Something very strange is happening at Stately Academy beyond what she, Eni and Josh have already uncovered.

Punishment is turned into lessons.  Spies get tied up in knots until a bunch of bullies burst onto the scene.  A mentor is kidnapped.  Bad things are about to happen unless our trio of Coders can come to the rescue.  Can they (can you) figure out a solution? Stay tuned for volume three, Secrets & Sequences.


Gene Luen Yang is not only a highly respected author and illustrator but is currently serving as the National Ambassador of Young People's Literature.  His tenure is based on The Reading Without Walls Challenge.  In this series Yang is making coding accessible to a wide range of readers as he weaves it into a captivating mystery surrounding the school, the school employees and the reason Hopper's father may have disappeared.  Told through Hopper's thoughts and snappy dialogue between the characters we feel as though we are participants in their story.  This is further enhanced when we are asked to stop and think about answers. Here's a passage after a puzzle is solved.

All right!
No cardboard box for me!

Come on, Mr. Bee!
Let's have a look at those secrets!

Not so fast, young lady!
Your first attempt was a failure.
According to our agreement---

According to your agreement,
they succeeded!
You never said anything about the
number of attempts they were allowed.

Children, you must promise to keep secret what I am about to reveal to you!


The panels on each page rendered by Mike Holmes are a blend of squares and rectangles of varying sizes and perspectives according to the narrative and necessary pacing. The spare use of color, black, white, gray and green, is a reflection of the early computer screen colorization.  Each image, with or without text, heightens the current mood and strengthens the story.

The facial expressions on his characters are highly dramatic, adding to the tension.  These allow us to easily place ourselves in the same position as the characters.  Holmes' final page of panels, in both volumes, contributes to the cliffhanger quality.

Both of these books, Secret Coders and Secret Coders Paths & Portals written by Gene Luen Yang with illustrations by Mike Holmes will have high appeal to readers.  The clever insertion of coding into a realistic school story filled with intrigue will have you turning pages as fast as possible and reading them again to make sure you understand the coding. To learn more about Gene Luen Yang and Mike Holmes and their other work, follow the links attached to their names to access their websites.  To see interior images from Secret Coders follow this link to the publisher's website.  Interior images from Secret Coders Paths & Portals can be viewed here.  You might be interested in reading this article, 5 Reasons You Should Be Reading Secret Coders at Wired. 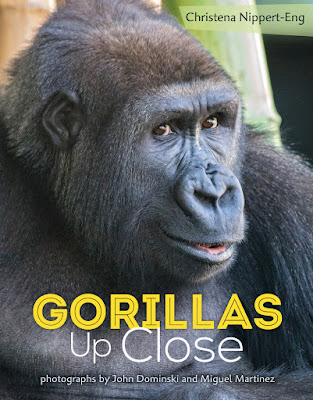 As part of this blog tour we were invited to select a title, a STEM publication, from a list of books.  I requested Gorillas Up Close (Henry Holt and Company, April 19, 2016) written by Christena Nippert-Eng with John Dominski, Frederick Grier, Jim Hornor, Eugene Limb, Sally Limb and Miguel Martinez.  Forty-one chapters including an introduction, acknowledgments, author's note, about the authors and an index (176 pages) give us an informative and intimate look at gorillas living in zoos.

Gorillas.  What's not to love?  They're smart, fun, busy, and hairy---from the incredibly cute to the seriously scary.  They're knuckle-walkers.  Vegetarian, too.  Who knew you could become that strong just by eating your veggies?

We come to understand the roles assumed in troops, the importance of silverbacks, teenagers, young adults and younger group members.  We see the reason behind the creation of bachelor troops. The value of play is stressed. Birth mothers and surrogate mothers are discussed.  Every aspect of the life of gorillas in our zoos is part of careful plans based upon years of work and study.

We visit each area of the Lincoln Park Zoo gorilla habitat; the outside and inside areas of Kwan's troop and the bachelor troop. Gorillas go through daily training to stimulate their thinking and growth.  Every effort is made to duplicate life in the wild.  They are treated with respect and dignity.  There are even celebrations for special events in the lives of the gorillas.

Of special interest is the Gorilla Species Survival Plan.  It is a dedicated effort by many individuals and groups to see that gorillas survive in the wild and in zoos.  Several chapters are devoted to watching and photographing zoo gorillas and resources for gorilla research.

Whether you decide to read this book in a single sitting or a chapter at a time, your respect for these magnificent creatures will grow page by page. Christena Nippert-Eng, through meticulous research, presents us with meaningful facts.  Nippert-Eng speaks to us in a conversational manner but widens our knowledge by leaps and bounds.  Her passion for this subject is highly evident.  Here is a sample passage.

Kwan's full name is Kwanza (KWAHN-zuh).  It means "first" or "beginning" in Swahili.  He was given that name because he was the first gorilla born at North Carolina Zoo. He's grown now, and his desire to get up and go helps him stay remarkable fit.  He weighs a whopping 365 pounds and eats sixteen pounds of vegetables and leafy greens with a bit of fruit every day.  His favorite foods include tomatoes, red peppers, lettuce, kale, and any kind of fruit.  He enjoys snacking on crunchy low-sugar breakfast cereals, too, and can pick up a single Rice Krispie with those giant sausage fingers of his.

Gorgeous color photographs by John Dominski and Miguel Martinez are featured throughout this volume, some taking up entire pages.  The close-up shots of the gorilla faces are breathtaking. You can see the unique facial features and individual personalities in each of these portraits.  Great care was taken in the layout and design of all the elements, text, captions, and images.


I highly recommend Gorillas Up Close written by Christena Nippert-Eng with photographs by John Dominski and Miguel Martinez.  As a nonfiction read aloud it would be fantastic.  Older readers will enjoy learning about these marvelous creatures.  To explore some of the pages please follow this link to the publisher's website.

Be sure to enjoy some of the earlier blog posts and those following mine on this tour.