If anyone thinks dogs do not have a command of the English language, they need to reconsider their opinions.  How else can a dog who weighed fifty-one pounds at most during her lifetime have faced every single day like her namesake, Xena the warrior princess?  This dog was a force of nature, mentally and physically strong.

It was recommended we attend obedience school.  We lasted one session...well, almost.  The instructor insisted on using a pinch collar.  We made it once around the room walking with the other wee pups before I stopped, removed the collar and strolled out.  No one was going to take away my girl's spirit.

So I sought out places where we could walk, run and swim free from danger.  Otherwise a leash or thirty-foot lead was attached to a harness.  I wish I could have seen my face the day she pulled me down the road when I was wearing cross-country skis. She was and is my hero. 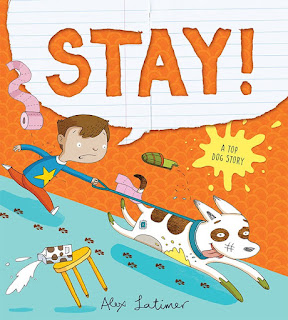 Some would look at us and think or say, "Who's running or walking who?"  I would simply laugh and try to keep up with her.  She made me be my best self.  Other dogs use their strength in a less restrained manner.   Stay: A Top Dog Story (Peachtree Publishers, September 1, 2015) written and illustrated by Alex Latimer is about an exuberant Buster and his loving human Ben.

Ben thought his dog Buster was
the best dog in the whole world.

Ben's parents do not quite share the same beliefs.  In fact Buster wears them out.  It is time for a vacation!  This year Buster is staying with Grandpa instead of going with them.  Last year had been a bit of a disaster.

Concerned with Grandpa not knowing Buster as he does, Ben, at his dad's suggestion, writes him a note.  One letter leads to another and another and another.  When he is hugging Buster goodbye and tearfully waving to him from the car, Ben can't shake the feeling he is forgetting something important.  During their vacation he continues to send extra advice on postcards but a truly vital thought continues to elude him.

When his father becomes lost on one of their side trips, it dawns on Ben what Grandpa needs to know, but it's too late.  The post office is now off limits for one rowdy canine.  Taking matters into his own hands, Grandpa gives Ben a note of his own when the family returns to pick up Buster.


Blending narrative and dialogue splendidly Alex Latimer delivers to readers a charming story of a boy and his dog.  The hand written notes with their drawings enhance this tale with childlike truths and the humor they bring.  The relationships between Ben and his parents and his grandfather add an extra level of warmth.  Here is a sample passage with the accompanying notes.

When Mum felt sick after eating a bad hot dog, it reminded Ben of something to tell Grandpa.

Diagnosis Chart
(What's wrong with Buster?)
sunburn (Buster is lying on his back with his legs in the air.)
lovesick (Buster is lying still with his eyes closed dreaming of his one true dog.)
ate a toy dinosaur (x-ray of Buster's stomach)
just needs to pee (Buster has his legs crossed.)


Unfolding the dust jacket readers are treated to a double-page image of Buster on the run through the house leaving chaos in his wake as Ben hangs on as best as he can.  Muddy paw prints show their path and pictures fly in their wake.  These drawings show Ben and Buster enjoying their favorite things done together.  (I'm working from an F & G.)  On the title page Buster is eyeing a single piece of chocolate cake on the table with the title Stay! over his head in a speech bubble.

Rendered as pencil drawings, digitized, then finished with color and texture Alex Latimer also includes what appear to be life-sized muddy paw prints, real colored pencils, pencil shavings, an eraser, paperclips, crayons, real photographs and hand-held pencil sharpeners.  This collage effect helps readers to feel more like participants in the life shared by Ben and Buster, Mom and Dad and Grandpa.  A bright, cheerful color palette is used in illustrations placed on a variety of equally brilliant backgrounds.  It's like turning the pages in a fun-filled scrapbook.

Latimer alters his image sizes to demonstrate a particular event, emphasize a story element and perfect the pacing.  The facial features on the characters will have you grinning from ear to ear.  Ben's drawings illustrating his hints to Grandpa will have you howling with glee.

One of my favorite visuals is a partial page of Ben lying on the ground writing his first note to Grandpa.  A glass of milk and a half-eaten cookie are next to him.  Buster is on the other side of him watching as calm as can be.  A notebook, crayons, pencils, a paint brush, scissors and pencil sharpener are scattered about them.


Stay: A Top Dog Story written and illustrated by Alex Latimer is a playful romp of a tale.  Readers are going to love the antics of Buster and Ben's descriptions of the essentials in Buster's energetic life.  I am confident you are going to hear requests of read it again amid loads of laughter.

If you follow the links attached to Alex Latimer's names you can access his website and blog to discover more about him and his other books.