For the past three days it's been snowing off and on, mostly on.  We now have a good five inches coating the neighborhood.  There's even more on the mountain tops which have been fading in and out of view depending on the strength of the system.  It's the kind of snow, falling gently and slowly, where you feel like you are standing inside a snow globe.

Walking through the halls at school the air is literally sizzling with excitement.  Vacation starts at the end of the day.  Families and friends will gather to celebrate Christmas next week.

For fifteen years around the beginning of December Xena could detect a shift in my mood.  Christmas is one of my favorite holidays to honor each year.  The boxes were taken from storage and decorations began to fill the rooms of our home and lights covered bushes and trees on the outside.  Hours were spent carefully unwrapping the ornaments, each with a story to tell if they could talk, and placing them on the tree.  Late nights and into the early mornings I worked creating unique cards to be sent to those with a place in my heart.  Gifts were chosen, wrapped, mailed or given in person.

Xena would stick her nose into all those boxes searching and watching.  She would lie at my feet as I worked crafting the cards and wrapping the gifts.  Most of all she loved looking for her gifts under the tree.  Without fail she would find those tagged with her name on them as if she could read.  On Christmas day with no encouragement from me she would take her gifts unwrapping them with her paws and teeth.  She would proudly carry for the day or longer whatever was inside, except for the treats which I saved for later.  Those fifteen Christmases will be most remembered for their joy. 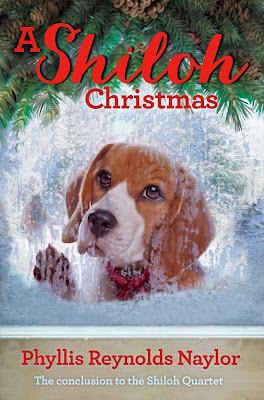 You know how sometimes you look back on a simple, ordinary day, and you wonder why things couldn't be like that forever?  Why just loving your own dog wasn't enough?

It's on the last Saturday in August, one of the driest summers this area has seen in sixteen years, when Marty Preston brings us into his world located in West Virginia.  He and his best buddy, David Howard, along with his beloved canine companion, Shiloh, are searching for cans and bottles along nearby Middle Island Creek.  Every cent goes toward a debt he owes Doc Murphy for stitching up Shiloh.  First Shiloh, then the boys, discovers a weird looking chair with metal clamps on the arms.  Who threw this here?  Where did it come from?

September ushers in the continued drought with Judd Travers, the man who mistreated Shiloh, offering help to the Prestons, working at Whelan's shop, and trying to change his image with the locals.  For the first time Marty, David and their other friends are attending middle school. A new preacher, Pastor Dawes, and his family have moved into the community but his sermons tend to be of the "fire and brimstone" variety.  Is this why his oldest daughter, Rachel, who's in Marty's grade, never smiles?

Rain comes for a short fifteen minutes in October and people like the Prestons with wells still need to conserve water, every single drop.  Marty volunteers at the John Collins Animal Clinic on Saturdays in the mornings and in the afternoon helps his dad with his mail deliveries.  On one Saturday he goes home instead to help with his two sisters as his mom is not well.  The three of them are working on a Halloween decoration outside when they suddenly stop.  They all smell smoke.  Marty knows his parents will be furious when they discover he is riding straight toward the blaze.  Will he get to Judd's other dogs in time to set them free?

The losses suffered by families are enormous.  There is no trick or treating this Halloween.  With a sinking heart, Marty realizes his wish and his dad's plan to finish the addition so he can have his own room are no longer a priority.  One evening a lone figure stands on their porch asking permission.  Is this why there is a tent in their front yard?

November comes and goes as a gray month with the rains finally coming down in torrents for days at a time.  On an excursion to find something lost, Shiloh disappears.  Marty waits day after day for him to return home.  One morning his dad wakes him but won't let him go outside.  What has his dad seen?

Amid the preparations for Christmas, a problem escalates dangerously.  Good people need to make hard decisions.  The generosity of one astounds the Preston family.  Aunt Hettie's gift and a Christmas Day afternoon signal slow adjustments.  A year of change for Marty and his dog comes to a close in the silence of lives lived the best they humanly can.


Having read this entire two hundred forty-six page book a few chapters short of one sitting, two things come to mind.  First, this book stands strongly on its own merits.  Phyllis Reynolds Naylor deftly weaves essential elements from the three previous books into the fabric of this story narrated by Marty.

Second, the descriptions of the local community and citizens and the conversations between the characters as well as Marty's thoughts are outstanding.  As soon as I completed this book, I wanted to read it again.  Sticky notes fill page after page marking profound insights from more than one person.  Repeatedly books written by other well-known children's literature authors are mentioned.  Here are some sample passages.

The thing is, the first time I tried to keep Shiloh away from Judd, I was honest about it---told Dad how Judd treated his dogs back then, but he made me hand Shiloh over anyway, all trembling in my arms.  Guess there's a legal right thing to do, and a heart right, and anybody got a heart, I don't know how he could give that shaking, whimpering dog back to a man who kicked him in the side with his boot the minute we let Shiloh out of the car.

Ma's reaching up with her arms, whirling herself slowly around and around like a dancer, her hair all wet down to her shoulders.  I just plain lie down in the grass and let the rain pepper my whole body.

"So it's not like there's a big reservoir in the sky God could let loose if he wanted?" I say.
"There's whatever has been sucked up by evaporation from the oceans, and at some point it will come down again as rain," says Doc.
"You don't think the drought's because God's mad at us?" I ask.
"I believe there are cycles to nature, and not all of them are to our liking," he answers.
He goes on cutting up apple, I go on cleaning shelves.
I wonder if I am pestering him with these kinds of questions.  After a while I say, "Guess I've got a lot of whys in my head."
"So do I," says Doc.  "And the longer I'm a doctor, the longer I work with people, the more whys I get."

A new woods to a dog must be like a Sunday buffet.  Can't hardly decide what smell to try next, tail awagging like a windshield wiper.


This book, A Shiloh Christmas, written by Phyllis Reynolds Naylor has something in it for every kind of reader.  It's a story about the power of family, for good and sometimes not for good.  It's speaks to the prejudices of people regarding a person's past.  It's full of life, little bits of mystery and at times a lot of tension. It's about a community coming together in poignant moments which will bring tears to your eyes.  It's about the love of a dog for his boy and the love of a boy for his dog.  This is a classic masterpiece.

If you wish to read an excerpt from the book please follow this link to the publisher's website.