Paws down, there is no equal to dogs in playing the game of hide and seek.  Many a walk was taken in the woods with my canine companion scampering ahead taking in all Mother Nature had to offer. Hiding behind a tree, I would wait for her to notice my absence.  Not getting too far ahead she would suddenly stop, turn around and run back.

In the house I would tuck myself in nooks and crannies, hardly daring to breathe.  It was amazing to watch her seek me out in every possible spot as if going through a check list in her mind.  Sometimes I would stealthily move from position to position.  She would stop still as a statue, smelling and listening.  If I let out the merest squeak, she would find me in seconds. 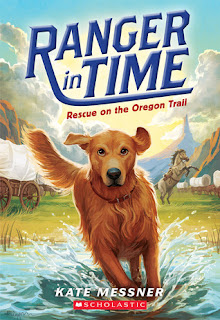 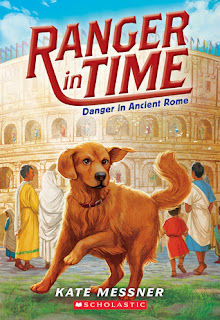 Search-and-rescue dogs hone their natural smelling abilities to locate someone missing or in need of help.  Versatile and much loved author, Kate Messner (Over and Under the Snow, Capture the Flag, Wake Up Missing, Marty McGuire Has Too Many Pets, Hide and Seek and Manhunt, All The Answers, Up in the Garden and Down in the Dirt, How To Read A Story, Tree of Wonder: The Many Marvelous Lives of a Rain Forest Tree) began a new series with the release of Rescue on the Oregon Trail (Ranger in Time) (Scholastic Press, January 6, 2015) with illustrations by Kelley McMorris.  It was followed on June 30, 2015 with the second book in the new series, Danger in Ancient Rome (Ranger in Time) (Scholastic Press) with illustrations by Kelley McMorris.  Ranger, a Golden retriever, has been specifically trained as a search-and-rescue dog, but his proclivity for chasing squirrels cost him certification.

Sam Abbott lugged another sack of bacon to the wagon and sat down to wipe his forehead.

Sam, his parents, older sister Lizzie, younger sister Amelia and baby brother Isaac have gathered with others in the city of Independence, Missouri.  They have their sights set on reaching the Oregon Territory before the big snows come.  Challenges will besiege the twenty wagons in their group every step of the way.  Before Sam and his father have loaded all the supplies, trouble descends.  Three-year-old Amelia has disappeared!

In present day, Ranger, squirrel chaser champion, is digging deep in the garden in search of bones when he detects another smell, a metallic scent.  He pulls out a box with a leather handle.  On the side written in symbols is First Aid.  Meaning to take the box to his boy, Luke, for inspection Ranger is startled by vibrations, heat and a blinding light.  He is no longer in his back yard but on a dusty crowded street in Independence, Missouri circa 1850.

Words and then a smell connect to his training making him the hero of the day when he locates and guards Amelia. The promise of bacon binds him to the Abbott family as they go west.  Buffalo stampedes, sickness and raging rivers are a few of the hardships faced and endured.  After each feat of heroism as the days and weeks pass, Ranger looks for Luke in the morning and evening hoping he will take him home.  Would his job ever be finished?

Over the sound of glad voices, Ranger hears another sound.  It's coming from the back of the covered wagon.  Humming?  Loud humming?


Marcus held his sword high in the hot Roman sun.

Marcus was sold in slavery to pay off debts after his parents were killed in one of the frequent fires in Rome five years ago.  Villius, his owner, manages the Ludus Magnus gladiator school near the Colosseum.  For Marcus, becoming a gladiator holds the key to a door called freedom.

When Ranger is deciding whether to chase a squirrel or a soccer ball gone wild, a sound signaling a call for help reaches his ears.  When Dad opens the door, he goes immediately to his bed where his treasures are hidden in the folds of fabric.  It's the box.  It's humming again.

Standing in one of the many tunnels beneath the Colosseum, Marcus, a new recruit Quintus and Ranger are trying to navigate a way back to the training barracks.  By day's end death will seem eminent for more the one, more than once.  It like the scent of the big cats used in the wild animal hunts and the smoke from fires, hangs heavy in the air.  With each success Ranger wonders when he will hear the familiar words of

spoken by Luke.  It will not be on this day.

One day blurs into another until Quintus, though barely ready, is called to fight.  He is matched against a deadly opponent with no hope of survival.  As the roars of thousands seated in the Colosseum roll around the fighters, a boy and a dog, events unfold like history has never seen.


As shown in her extensive author's notes, photographs, travels, a glossary, further reading suggestions and sources, Kate Messner writes with a sure knowledge of historical events and the work of search-and-rescue dogs.  Short chapters filled with detailed descriptions and electrifying adventure and action are highly captivating.  Repeatedly one episode flows flawlessly from one chapter to the next.

Intimate elements held in common by people across the barriers of time and place bind readers to the characters.  Well-executed dialogue brings readers directly into the story as if we are standing with the participants.  Here are some sample passages from both books.

Sam stood up and sighed.  He shoved a hand into his pocket and felt the folded-up friendship quilt squares his cousins had made.  They hadn't finished in time to include them in the big quilt that Aunt Cecelia put together for their family, but they gave them to Sam anyway.  He was glad.  He liked having three small squares of home in his pocket.

Sam watched from the wagon.  His heart thumped along with all those pounding hooves in the dirt.  Every time one of the men's guns exploded, Sam's breath caught in his throat.

Ranger ran to Sam and lifted his nose.  He could smell Pa's scent in the air, along with everyone else and the horses and cattle.  He smelled sage and bacon grease from breakfast and rain from last night.  And above it all, he sensed cold, raw fear.

Marcus hurried across the arena toward the row of barracks.  The sun had barely risen, but the day was already hot and muggy.  The sharp smell of smoke filled the air.

Ranger took a step closer to the lion and barked.  He growled deep in his throat and pulled his lips back to show the big cat his teeth.  At home, that made Ruggles the neighbor cat run under the porch.
But this was not home.  There was no porch.  Only a dead-end passageway with hard stone walls.
And this cat was not afraid.

His eyes looked tired, but they crinkled at the corners when he smiled.
"But today, you and your dog gave them the one thing they love more than blood." The servant looked up at the crowd of Romans, still on their feet cheering.  "You gave them a story.  One they will tell for a long time to come."

The black and white interior illustrations and full color dust jackets rendered by Kelly McMorris extend the events and heighten the sense of tension.  Altered perspective and historically accurate surroundings give readers a sense of place and time drawing us completely into the narrative.  Facial features on the characters supply a wide range of emotion.  Her portrayal of Ranger will have you wanting to reach into the pages to give him a hug and words of praise.


The first two titles in the Ranger in Time series, Rescue on the Oregon Trail and Danger in Ancient Rome written by Kate Messner with illustrations by Kelley McMorris will engage a wide spectrum of readers from beginning to end.  History and the work of a search-and-rescue dog are blended together to create true page-turners for individual readers and engaging read aloud stories for a group. You'll want to add these to your personal and professional book shelves.  The third title, Long Road to Freedom, is set to release at the end of 2015.

For further information about Kate Messner and Kelley McMorris please follow the links attached to their names to access their respective websites.  This link will take you to the publisher's website for a Classroom Guide.