In the summer of 2014 a study was released, confirming what humans chosen by canines already know, regarding the emotions experienced by dogs, It's Not Your Imagination---Your Dog Gets Jealous.  It is my belief after years of experience they not only exhibit an array of emotions but they have a sense of imagination.  This can be seen in the way they play and go about their doggy day.

Xena channeled her inner otter when she swam, skimming and gliding, for hours at a time.  Within a heartbeat she became a giant of the sea, a whale.  When she was in pursuit of a rock, sometimes bigger than my fist, she not only dove deep but it was incredible to see how long she would hold her breath. (I started timing her out of curiosity. One time she passed forty-five seconds on her way to fifty.  I was heading out to bring her up.)

For readers of these tribute blog posts, you know she had the strength of an ox.  How else could she pull me down a snowy road on cross-country skis?  One minute she was walking along in front of me, the next minute she was tugging me along as if to say, "Your pace is too slow, Mom!"  In the face of danger she became the leader of our pack of two; changing into a wolf to protect us.

She scrambled up steep grassy hills, tall sand dunes and rocky inclines like a goat.  She also tended to eat almost everything as goats are apt to do.  Her hearing rivaled that of a bat.  To try to open a cupboard, refrigerator door, her dog food container or treat bag without her hearing was impossible, even when she was sound asleep.

Elephants are said to have the best sense of smell but I think Xena would have won in a challenge.  A neighbor couple would take care of her if I was going to be late coming home.  After she fell in love with them (and they with her) she could smell when they were outside.  Their home was across the street from ours, kitty-corner and two houses down.  If they were in their back yard, out of sight, she still knew they were there.

She ran like a jaguar for the sheer fun of it or in giving chase with a canine friend.  No Frisbee was safe if she was near, jumping in the air like a kangaroo.  She was a blanket, a pillow, a foot-warmer and most of all an angel watching over me for all of her life. 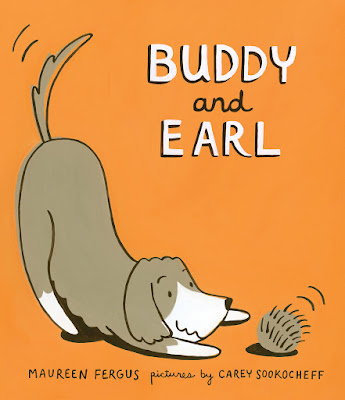 The imaginative nature of dogs is often exhibited in their curiosity and in their need to discover, regardless of the outcome.  Buddy and Earl (Groundwood Books, House of Anansi Press, August 11, 2015) written by Maureen Fergus with pictures by Carey Sookocheff follows Buddy on an adventure full of surprises.  A gray day turns into what promises to be years of sunshine.

It was a rainy afternoon.  Buddy was feeling bored and a little lonely.

This feeling of boredom and loneliness is about to change.  One of his humans, Meredith, walks into the living room telling him to remain right where he is as she places a box on the floor. She leaves intending to return in a minute or two.

Buddy simply can't resist this temptation.  Peering into the box he sees the weirdest thing he's ever encountered.  Licking it is a bad idea.  It starts to make noise and move.  This is going to be fun!

After verbal introductions Buddy asks Earl exactly what he is.  Earl's reply of

does not match Buddy's observations.  Three more improbable answers continue the exchange until Earl suddenly wants to know what Buddy is.  Rather than listening to what Buddy might say, Earl immediately starts guessing.  A huge inanimate object, a large jungle animal, and a tiny mammal are his first three suggestions.


Earl reveals he is only teasing but with complete candor states they must be the same.  With that announcement of their dual identity the shenanigans commence.  Totally enthralled by the excitement of this game Buddy romps on the furniture following Earl's lead.  Mom is not happy by Buddy's antics when she enters the room.  Earl speaks. Buddy hears.  A new status for the twosome is born.  It's simply the best.


Maureen Fergus uses word combinations and character contrasts to entice readers and maintain our interest.  With the words

she initially elevates our anticipation.  We hope Buddy will not stay.  We feel like cheering at his curiosity.  As the back-and-forth banter between Buddy and Earl starts and progresses the comedy builds until Earl's revelation.  Their play will have you wishing you could join them.  (You'll have to stop laughing first.)  The contrast of Mom's dialogue and Earl's voice (which Mom can't hear) to Buddy at their discovery adds a new dimension to the story bringing us along for the wonderful conclusion.  Here is a sample passage.

"You're right," said Earl. "I'm not a race car, I'm a giraffe."
Buddy thought about this.
Then he said, "I am pretty sure that giraffes have long graceful necks, Earl.  As far as I can tell, you have no neck at all."


At first glance the matching dust jacket and book case let you know this book is going to be spirited.  The motion marks for Buddy's tail and Earl's hedgehog body tell their own story.  To the left, on the back, Buddy is enjoying a peek inside the box, contents currently unknown.  Both the opening and closing endpapers are in a pale blue-gray hue.  With a page turn we see Buddy on his bed watching Earl stroll off the page.

Acryl Gouache on watercolor paper and assembled in Photoshop

the illustrations by Carey Sookocheff give readers a superb connection to the characters.  Some of the images are full page, others are smaller and grouped by twos and for full emotional impact they span two pages.  The background colors shift in excellent unison with the rise and fall of the story line.

The layout of the elements in each picture and the perspective are superb.  One of my favorite illustrations is when Earl is on top of the sofa as their imagined adventure begins.  Buddy with Earl's box on his head is a willing participant as he leaps up to join the hedgehog.  It's interesting to note how the shape of the box changes as their play advances.


Buddy and Earl by Maureen Fergus with pictures by Carey Sookocheff is an outstanding story on the gift of imagination and friendship.  Exceptional pacing will completely engage readers from beginning to end.   This joyful dedication speaks volumes:

For the real Buddy, because he is the best dog ever, and for the real Earl, even though he prickles me.---MF

Please follow the links attached to Maureen Fergus' and Carey Sookocheff's names to access their websites.  You can learn more about them and their other work.  At the publisher's website you can view three more interior pages.