Be Aware Of These Bears And Their Books Part I

An unexpected encounter with them puts our lives in danger.  They are the largest land carnivore on our planet.  They are ferocious but generally shy and when observed from a safe distance intriguing. When seen in a toy shop, we select them to become cherished friends.  In 2002 a centennial celebration marked their creation. 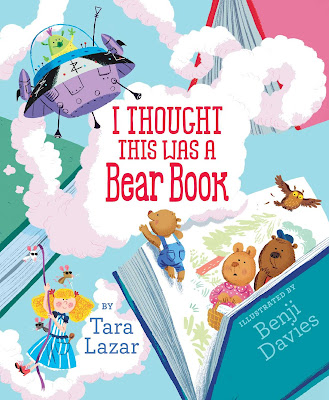 In literature, as characters, we laugh at their antics, marvel at their insights and ingenuity and more times than not make room in our hearts for what they represent. As 2015 comes to a close there are five titles featuring bears I would like to highlight in two separate posts.  I Thought This Was A Bear Book (Aladdin, an imprint of Simon & Schuster Children's Publishing Division, August 4, 2015) written by Tara Lazar with illustrations by Benji Davies gives readers a peek at the potential for problems when books fall from a shelf.

Once upon a time there were three bears.
Zark! Zoot! Zinder!
DOING  WHOOSH  CLANG

A spacecraft crashes into the woods normally populated by residents from the land of fairy.  A green being has lost his book and needs to return to Planet Zero.  No one is more surprised by this turn of events than Papa, Mama and Baby Bear.

Prince Zilch is panic-stricken at his plight.  He needs to return to page twenty-seven immediately.  These berry-picking bears, who are sick of eating porridge, are unfortunately more interested in exploring his other-worldly vehicle.  Their fumbling fixes any chance Prince Zilch has of leaving on schedule.  Both the alien and largest bear appeal to the reader for help.  As luck would have it you-know-who, the girl with the golden hair, arrives.

With only certain items on hand, chairs, beds and busted bits, the bears do their best to assist the royal visitor out of their story.  Nothing seems to work.  As parents snooze, Baby Bear proposes a plan.  It might work.  WHOA!  Now look what we've done!


With a talent for fracturing fairy tales Tara Lazar very quickly alters the norm by introducing a character from a different galaxy...er...story.  His language is easy to understand although he does tend to favor the letter z.  Told entirely in dialogue between the characters and at times directed at the reader, humor is prevalent.  The use of alliteration adds to the buoyant cadence.  Here is a sample passage.

Papa Bear Well, maybe you can bounce out of the book using our beds.
Goldilocks Jeesh, can't a girl get some shut-eye around here?


Digitally rendered using an array of hues, leaning toward secondary colors, Benji Davies introduces the characters on the front of the matching dust jacket and book case.  He peaks our curiosity as to the importance of the open books with familiar faces looking from and leaving the pages.  To the left, on the back, Papa, Mama and Baby Bear are walking away from us toward the berry bushes.  Prince Zilch is zooming past with his signature pink cloud trailing behind his spaceship.

One of the shades of green from the bears' book is used on the opening and closing endpapers.  A page turn shows a child leaving a book case as books slip from position and fall to the floor.  An alien vehicle zooms from one into Goldilocks & The 3 Bears.  On the verso and title pages the image from the back of the jacket and case is extended with an enlarged book on the left.

Picture sizes vary from two pages to single pages and to several on a single page.  Many of them have rounded corners with white space acting as a frame.  The dialogue is placed in colorful balloons of pink, yellow, orange and two shades of blue depending on who is speaking.  Plan on laughing out loud at the details Davies adds to enhance the story.

One of my favorite illustrations spans two pages.  First the alien and then Papa Bear are talking directly to the reader.  The fallen spaceship is behind them.  Behind the vehicle Baby Bear and Mama Bear are smiling and waving at a busload of tourists who have stopped to take their pictures as if they are bears in a national park.  I dare you not to smile.

I Thought This Was A Bear Book written by Tara Lazar with illustrations by Benji Davies is definitely a bear book filled with fractured fairy tale fun.  It's a tribute to the power of story and those who read them.  To discover more about Tara Lazar and Benji Davies please follow the links attached to their names to access their websites.  Tara Lazar includes a teacher's guide and fun activities as well as links to other posts about this book.  At the publisher's website you can view three additional interior images. 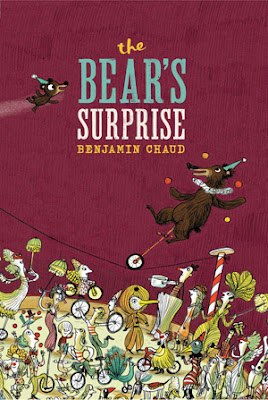 Readers were and will continue to be enchanted with the father and son duo and their winding adventures in The Bear's Song and The Bear's Sea Escape.  In a third title, The Bear's Surprise (Chronicle Books, September 15, 2015) written and illustrated by Benjamin Chaud spring has sprung.  Roles are reversed as Papa Bear seems to have vanished.

Deep in the forest, Little Bear awakens to the sounds of spring.  Outside his cozy den, birds are chirping, animals are scurrying, and Little Bear smells the sweet scent of flowers.

Little Bear's joy at the shift in the seasons is short-lived as he notices his father is absent.  Could he be near the yellow glow beyond the trees?  The shining sun lights the way along an unexplored trail.

Within mere minutes Little Bear is standing in front of a large hole in a hillside.  Could this lead him to Papa?  It's a huge, huge cave filled with beings from fantasy, now and the past.  Oh!  What's this?

How did Little Bear get into a washing machine?  Who are all these creative creatures and people straight from the realm of whimsy?  Little Bear rushes toward a large red tent.  He thinks he spies Papa Bear's behind.  A crowd has gathered and is making their way toward seats.  Suddenly the lights are lowered.

Papa Bear and Little Bear are making magic with their planned and unplanned performances.  The watchers cheer and applaud as Little Bear soars higher and higher.  He flies.  He lands.  He leans.  Oh. ... This is indeed a surprise, a wonderful gift of spring.

Little Bear darts through a collection of quirky clowns, costumed cats, and other curiosities until he spots something behind a great red curtain.  Isn't that Papa Bear's fuzzy brown bottom?  With three quick hops, Little Bear enters the circus tent.  What will he find?


The muted earth tones seen on the matching dust jacket and book case are used by Benjamin Chaud throughout the book.  The fine lines, multitude of details and fascinating characters are his signature style for these bear books.  To the left, on the back, a small oval image amid a golden yellow background foreshadows the surprise.  A similar hue colors the opening and closing endpapers acting as a canvas for a pattern of large white stars.  On the opening right side Baby Bear is seen flying through the air wearing a circus hat.

Beginning with the title page Chaud starts his new technique for this title.  Each two pages contain one or more cut-outs encouraging us join Little Bear.  You will marvel at their placement.  The exquisite intricacy of the elements placed in each two-page illustration will take your breath away.

One of my favorite pictures is when Little Bear goes into the hole in the hillside and enters the cave.  All the passages and little rooms are amazing.  They are filled with creatures you might expect to see; foxes, moles and a skunk.  There is a tiny yellow submarine exploring in the water.  A creature from the age of dinosaurs hangs from the ceiling as bats flit from place to place.  People from the past and present have made their homes here.  You will gasp when you spy two memorable fictional characters.


The Bear's Surprise written and illustrated by Benjamin Chaud is another stunning title in the series.  Readers of all ages will read this over and over looking for new items on every page.  At the publisher's website three more images can be viewed.  Even though this book trailer is in French you can get a closer peek at some of the pictures.  It's also interesting to see the dust jacket used for the French version. 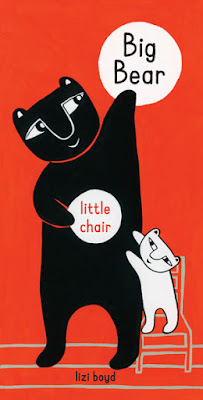 As she did in Inside Outside and Flashlight Lizi Boyd asks us to expand our inventive nature in her newest title.  Big Bear Little Chair (Chronicle Books, October 6, 2015) is a book of concepts.  Opposites combine, two characters' lives intertwine.

A bird, a zebra, a butterfly, and an elephant are paired with a trick, a rock, a broom and an umbrella.  Is that a star and the moon?  Little Bear is as surprised as Big Bear to see the size of his chair.

What do an owl, a meadow, a lion, a sea, a rabbit and a forest have in common?  They are all matched with little things.  Most are normal, but one is quite extraordinary.  Ahhh....now Big Bear and Little Bear are together next to a little chair (and a big chair).

Another item has been added to the comparisons.  We read from big to little and finally to tiny.  Who's driving the little bus?  What's near the big seal?  Who's walking through the little village in the big snowstorm?  Tales are told.  There are bears in chairs too.


Lizi Boyd divides the book into four sections.  Within the first three she includes six comparisons.  The attention of readers is guaranteed with her ingenious selections.   With each page turn we wonder if we will see an owl on a branch or a zebra with a broom.


Red, white, black and gray are the only colors Lizi Boyd uses in this title.  The red is extended on the dust jacket and book case to the back on the left.  The circles used to hold the title text on the front frame pictures of an owl, an elephant and a turtle on the back.  The endpapers are done in two shades of gray, each with a different graphic design.

A variety of shapes are featured in each single page visual.  Rendered in gouache the lines range from delicate to precise.  Careful readers will notice how the expressions change on Big Bear and Little Bear as the book progresses.  Each animal showcased in the images is content and smiling.

One of my favorite pictures is for big meadow and little salamander.  The flowers in the meadow are done primarily in gray with added details in black on a white background.  The lines are extremely intricate.  Tucked in at the bottom is a small bright red salamander.

Big Bear Little Chair written and illustrated by Lizi Boyd is many things in one.  The graphic designs are impeccable.  The size and shape of the book is perfect for the intended audience.  To learn more about Lizi Boyd please follow the link attached to her name to access her website.  At the publisher's website are three more interior images.  Lizi Boyd wrote a blog post at Chronicle Books about this title.  Enjoy the book trailer.