Be Aware Of These Bears And Their Books Part II

Grouchy fictional bears, as opposed to bears in the wild, are to be enjoyed for the hilarity they prompt in readers.  Perhaps it's the contrast between them and their cute, cuddly cousins, toy teddy bears.  Or maybe we see a little bit of ourselves, when we are having a bad day, in their behavior.  Whatever the reason, these next two titles are sure to have readers, at the very least, smiling as soon as they see the front dust jackets. 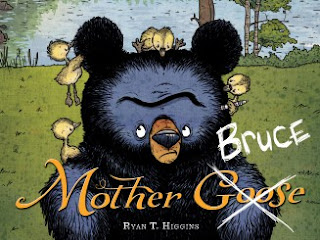 Four goslings seem to be enjoying their exploration of a rather annoyed bear in Mother Goose Bruce (Disney Hyperion, November 24, 2015) written and illustrated by Ryan T. Higgins.  Clearly they are unaware of his discontent.  He, on the other hand, is more than concerned with the current state of affairs.

Bruce was a bear who lived all by himself.
He was a grump.

The only thing this forest curmudgeon liked...no craved...were eggs.  To make matters worse for the other woodland dwellers, he took the eggs.  He found them to be most delicious when made into culinary delights.

The stream, hive and nest were raided with determined glee.  To Bruce's dismay when he went to hard boil the eggs, his fire needed more wood.  Arriving back in the kitchen, Bruce was flabbergasted to hear four little voices cry out

This new development was not to his liking at all.  What was a cranky guy going to do with four newborn geese?  He tried to give them back to Mrs. Goose but she had vacated her home.  Leaving them didn't work.  They followed him everywhere.  Roaring didn't work.  They had bonded with Bruce.

Seeing no other alternative his newly-assumed role as a mom was downright difficult and exhausting.  When Bruce noticed the other geese flying south, he was ecstatic.  The four fully-grown geese would leave him in peace.  No. No. No.  They stuck with Bruce like glue.  In a resourceful turn of events Bruce and the geese each got what they wanted and needed.


As the story unfolds, told by an unseen narrator, it's the little snippets of dialogue inserted by Ryan T. Higgins which increase the comedic effect.  Not only is Bruce a grump but he's always looking out for himself first, trying to make the best of a less than hunky-dory situation.  Each of the concise single sentences has been carefully crafted to heighten the disparity between the text and images.  Here is a sample passage.

Last, he went to Mrs. Goose's nest to pay her a visit.
"Are these eggs free-range organic?"


When you run your hands over the front of the dust jacket the title text is raised.  The x through Goose and Bruce are also designed to feel like scribbled crayon.  To the left, on the back, on a textured matte-like golden yellow canvas, a shiny picture of the nest, next to cattails and the pond, has been placed.  Two goslings are walking from the nest on the picture; one is half in the picture and half on the background.  The fourth baby is striding away on the yellow. The book case is a close-up of Bruce's grouchy face on the front and the back of his head on the back.  The opening endpapers feature an early morning sun shining through the trees and on the right is Bruce's home.  The closing endpapers are different but in perfect harmony with the story's end.  (My lips are sealed.)

With a page turn the woods remain on the left.  To the right Bruce is sitting down to partake of his favorite food beneath the title text.  Higgins alters his image sizes, the framing and perspective to elevate a mood and emphasize a particular moment.  His use of white space as an element in the illustrations is first-rate.  It's the facial expressions on Bruce which will have you laughing out loud over and over again.  Well, that and his physique.  And if you are not rolling on the floor yet in uncontrolled mirth there are the extra details; Bruce's use of a shopping cart, the gosling carrier, and the geese wearing hats, coats, scarves and boots.

One of my favorite illustrations is of Bruce standing next to the blue and white polka-dotted kiddie pool watching the goslings splashing in the water.  Bruce ready to join them is wearing pink water wings with daisies, a blue and yellow striped inner tube and yellow flippers.  It's a bright sunny day but his disposition is completely stormy.


Mother Bruce written and illustrated by Ryan T. Higgins is one of those books when you open the cover you expect to hear laughter ringing from the pages.  I would like to think Higgins has given a hat tip to Bill Peet's Big Bad Bruce with this book.  I urge you to share this title with someone as often as possible.

To learn more about Ryan T. Higgins please visit his website by following the link attached to his name.  This title has been chosen by Scholastic's Ambassador for School Libraries John Schumacher and standing-on-a-desk-and-shouting-I-love-reading third grade teacher Colby Sharp as one of the books for the February #SharpSchu Twitter Book Club.  Ryan T. Higgins was a guest on All The Wonders, Ryan T. Higgins: Picturebooking, Episode 41. 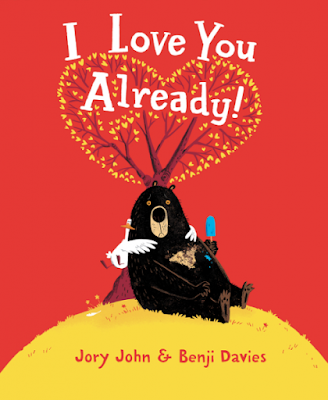 A little more than one year ago readers were introduced to a bear who prefers to be alone and his noisy, nosy neighbor, a duck, in Goodnight Already! The mismatched friends have returned in I Love You Already! (Harper, an imprint of HarperCollinsPublishers, December 22, 2015) written by Jory John with illustrations by Benji Davies.  One glimpse at Bear's face (the deer caught in the headlight look) and we know some things (or a bear and a duck) never change.  For those of you who believe in the power of laughter, thank goodness for that.

Readers will quickly note that Duck has a different plan, nestled in bed, snacking on a cookie with his I ♥ Bear mug next to the bed, and reading

Within two shakes of a duck's tail he's on his way to Bear's place ready to roll and repeatedly asking Bear to go for a walk.  Bear's morning of tea-sipping and book reading is over.  Duck's six reasons for Bear to come outside are met with an emphatic

If for no other reason than to get some peace of mind, Bear reluctantly agrees to stroll along with Duck.  The winged walker chatters non-stop eliciting the same responses from Bear.  He only wants Bear to like him. Bear tells him over and over that he does like him...ALREADY!

Finally telling Duck he needs some space and longs for a nap, Bears heads to the shade of a tree.  Duck is bored, bored, bored.  Without Bear knowing he climbs the tree intending to snare Bear's attention.  YIKES!  A startled Bear knocks Duck right out of the tree.

In the following conversation a role reversal reveals Bear's true feelings.  Duck's euphoria sets him off and running again.  Bear's final sentence, as he stares right at the reader, sums up his personality perfectly.


You have to admire the skill necessary to form two distinct characters as different as night and day.  The old adage of opposites attract as written by Jory John is indeed true but not readily visible.  The story, told entirely through dialogue, pulls back Bear's outer shell for a few moments before falling back into place.  This is what maintains the humor from beginning to the end.  Here is a sample passage.


The bright red on the dust jacket catches your eyes at first glance.  You will notice the shape of the tree branches in a heart and the heart-shaped individual leaves as you look more closely.  Duck hugging Bear with his eyes closed will start the giggles.  To the left, on the back, Bear is sitting on a blue bench in a dejected pose wearing his yellow straw hat as Duck on the other end is talking non-stop.  On the book case the canvas is composed of a diamond and square pattern.  On the right Bear is sitting on the floor, hiding behind a curtain.  On the left Duck is peeking in Bear's window trying to locate his best buddy.  The opening and closing endpapers are the same bright cheerful yellow as the hill on the front of the dust jacket.

The title page is a mirror image of that on the front of the dust jacket with the exception of the changed hues in the leaves and title text.  The publication information and dedication pages show the friends' homes as the sun rises.  The use of yellow, turquoise, grass green, pink, orange and red throughout the book lifts the merriment level.

To provide pacing Benji Davies has created single page images, two illustrations on one page framed in white, and a series of pictures on two pages.  He alternates the background hues to actively engage his readers.  The body movements and postures of both Duck and Bear depict their personalities to a T.

One of my favorite illustrations is of Bear resting against the tree trunk.  He has lowered his hat to partially cover his eyes.  A single daisy is hanging from his mouth.  This image spans across two pages.  This is the "pregnant pause" filled with anticipation.  You know something is coming.


I Love You Already written by Jory John with illustrations by Benji Davies is a fun-filled companion to the original title.  Use it to celebrate Valentine's Day, friendship and the often hidden love between two unlike souls.  To learn more about Jory John and Benji Davies please follow the links attached to their names to access their respective websites.  Enjoy the book trailer.