The sensory characteristics of dogs make them perfect sentinels inside and outside our homes.  Furthermore you can see it and read about it but their perceptions of human moods can't be truly appreciated until experienced personally.  It's uncanny how they respond to the emotional state of humans close to them especially their own human.

One of the frequent treks Xena and I would take daily was along a sandy shoreline near a local ski resort.  Between the mountain slopes and lake is a series of paths in a wooded area.  On one particular late afternoon we were returning to the parking lot from the lake.  For her protection Xena was always on a lead if we had any chance of being near other dogs or people.

Within seconds of hearing frantic barking a German Shepherd rounded a corner on one of the paths heading toward us in full attack mode.  For the first and last time in her life, I watched as my sweet girl transformed before my very eyes. Through the leash she must have felt my total terror for her and our situation.   Her stance changed as she seemed to grow in size, her lips curled back and her ferocious growls and frenzied barks began.  My retriever changed into a wolf.  It was incredible. 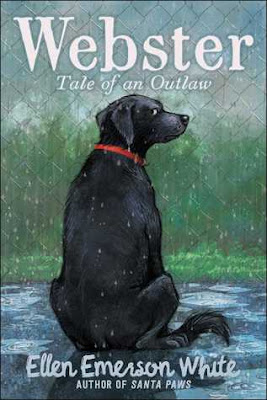 When the need arises dogs true hearts take over.  Webster: Tale of an Outlaw (Aladdin, an imprint of Simon & Schuster Children's Publishing Division, November 3, 2015) written by Ellen Emerson White chronicles the journey of a dog without a home.  We are watchers and listeners of the cats, dogs and humans in his life.  We are changed by what we come to understand.

The dog was way too cool to be scared.  Or alarmed.  Or even a tiny bit nervous.
But, apparently, when it came to being adopted, the third time wasn't the charm.

Physical and emotional abuse by this latest family ends when the mother and children, crying and heartbroken, take the dog to a vet to be put asleep.  When the vet refuses, and on his recommendation, the dog is taken to Green Meadows Rescue Group.  Named Webster by Joan and Thomas the owners of the home, farm and acreage, the dog prepares himself mentally to remain aloof and wary until he can escape.

On the first night, a strange sound coming down the hallway toward his kennel puts Webster on high alert.  To his utter surprise it's a rather strange-looking cat, not too big, but formidable in demeanor speaking with a British accent.  Florence rules this roost of collective felines and canines.  She invites Webster to join the other residents in the den for a little conversation, snacks and a night of television and movies.

It is during this first astonishing nocturnal visit after his declarations he is given the name of Bad Hat by his colleagues.  Regardless of his treatment by the humans or the others, his goal is to be a loner and wicked to the core.  Although if asked he would probably be the first to admit, it might not be in his nature.

A routine of meals, exercise in an open field and naps start to settle Bad Hat a little but his goal of running wild and free is still foremost in his mind.  A nor'easter and a fallen tree provide him the superb opportunity.  Not one to think twice about consequences but only keeping his goal in mind, this dog sets out on a wild, windy and rainy night.

After a sleep of sharing a too-tight-for-comfort den with a family of raccoons, the wayward stray starts to look for breakfast when an annoying but frankly endearing terrier called Jack appears.  It seems Florence is determined to provide one of her group with company and pleas to return. The duo has an exciting day of one heroic event after another.  When Duke, the second shift member, arrives, Bad Hat figures he has no choice but to at least stop by for a nightly viewing and food.

Florence does indeed have a plan but so does Bad Hat.  And we all know what happens to plans when we least expect it.  The line between the roles of rescued and rescuer become blurred and subtly shifts to give us a cheer-worthy conclusion.


The realism of life for adopted and returned and shelter dogs and cats is depicted with authenticity which will evoke deep empathy in readers.  The conversations between the humans provide further understanding.  If you've ever wished your dog or cat could talk, Ellen Emerson White with wit and wisdom gives readers the cleverly crafted chance to do so.  Individual personalities of the residents are revealed as are their stories.  Your heart will ache and you will laugh out loud at the references to Downton Abbey, It's a Wonderful Life, E. T. the Extra-Terrestrial and a special Facebook page.  Here are some sample passages.

"Right, I forgot," Jack said.  "The Bad Hat says that Joan is, like your person, and that you are already adopted."
Florence laughed, too. "The Bad Hat may have a little bit of cat in him."
Oh, gross.  No way. "I am all dog," the Bad Hat said.  "In fact, I'm a dog and a half! All other dogs bow before me."
Duke---who had been crying in his kennel across the corridor---perked up.  "They actually bow? How'd you manage that?  Florence, you're not going to rename him King, are you? Because I'm still trying to work my way back up."
"No, he's the Bad Hat," Florence said.  "It rather suits him."
Raw-ther.  The British accent cracked him up, so the Bad Hat laughed again.

"That your dog?" one of the bullies asked.  "He looks dumb."
Dumb? Someone was calling him dumb? The Bad Hat most assuredly did not cotton to that. No, sir, he did not.
"He's not dumb," Paste Kid said, climbing to his feet.  "I think you guys are dumb."
All right, the kid had heart! The dog definitely approved.  Not much originality, or the gift of clever retorts---but, heart!
The bullies apparently decided that that was a good enough reason to start a fistfight, and one of them threw a punch and hit Paste Kid right in the face.  Paste Kid staggered back, clearly stunned.
Nope.  Not on his watch. The dog quickly jumped in between Paste Kid and the other three boys.  He gave the bullies a long, ominous stare---and they all stopped short, with their fists drawn back.
"Hey, call your dog off," one of them said uneasily.
"He's not---" Paste Kid paused. "I mean, I think he just wants you guys to leave me alone."
Yep. He'd have to give that answer an A.  The dog blinked at the bullies---once.


Author and dog owner Ellen Emerson White gives readers insight into the life of a stray and his comrades in Webster: Tale of an Outlaw.  Told with sensitivity she will have you looking at your furry friends and others with additional tenderness.  An Author's Note speaks to the care of stray animals and how help can be given.  She also suggests three charities which supply assistance.

To seek more information about Ellen Emerson White and her other books please follow the link attached to her name to access her website.  An excerpt of chapter one can be found at the publisher's website.