There is no need for an alarm clock.  They're more precise than anything conjured up by humans.  With a touch of their cold wet noses and sloppy kisses, dogs wake us up each morning at the same time without fail.

After relocating to a new home when Xena was four we took early morning walks with a neighbor and her dog.  Depending on the season it was usually dark as we began to seek all the new smells left since the previous day.  With noses as their guides Shadow and his human and Xena and I would briskly make discoveries first along one side of the road, then down the other side.

Despite Shadow's passing away, for years, until Xena and I no longer walked the loop (the last few months we were there), she would always stop at Shadow's house waiting for him and his pal to join us.  She remembered those walks and the shared companionship.  It was a bond never to be broken. 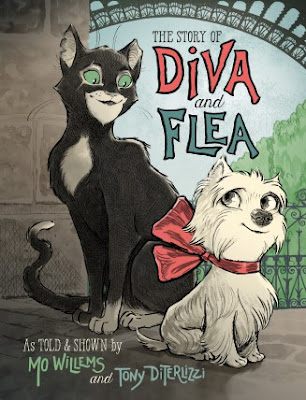 Our animal residents on this planet have much to teach us if we learn to look.  The friendships they forge are lasting based upon the best each brings to the relationship.  The Story of Diva and Flea (Hyperion Books for Children, an imprint of Disney Book Group, October 13, 2015) as told and shown by Mo Willems and Tony DiTerlizzi opens our eyes to the new sensory adventures which await us.

Diva, guardian of her small enclosed courtyard and the old apartment building along with her human, Eva, does so with vigor and extreme caution.  She has never been beyond the front gate.  Flea, a flaneur in the City of Light, a looker at everything and of anything, gathers experiences.  Each day adds to his repertoire.

On the first day the very large cat saw the very small dog, Diva yips and runs away.  This is entirely hilarious to Flea, so he does it day after day after day.  Finally Diva, disgusted with his behavior toward her, questions his motives.  As a token of an apology Diva finds a dead mouse on her doorstep the next morning.

After a short chat and both of them laughing about Diva's latest request, a charming routine is established.  In the comfort of the courtyard, Flea tells Diva stories about his city exploits.  One afternoon he invites her to come with him.  It is a huge idea.

The next morning after a fitful night of wondering and wanting, with Flea's encouragement Diva, pawstep by pawstep, follows him all the way around the corner seeing something more beautiful than she had ever thought possible.  On the following day, on his visit to 11 avenue Le Play, Flea is intrigued by a noise from within the building.  With Diva's encouragement Flea, with extreme caution, pawstep by pawstep, follows her into the grand hallway and through the door to her home.

Even though Flea gazes upon things more beautiful than he ever thought possible, a very scary object next to a pair of feet makes him yell and run.  When Diva does not follow, Flea has to make a decision.  Diva is pleased with his choice, showing him what can only be defined as enchanting.  A favor returned causes unexpected sheer joy.  That's what friends do for each other.


In writing his first chapter book, Mo Willems again demonstrates his mastery of the written word.  We read but also listen to the music created by his sentences.  Readers will enjoy the parts of the story divided by French headings and the short descriptive chapter titles.  There is magic in his telling of this tale of friendship not necessarily because of the setting, although it is a stunning example of what can be right in our world, but because it speaks to truths we should or do hold in our collective hearts. Here are some sample passages.

He liked the name "Flea." He thought it was a funny name because he was a large cat, and a flea is a small animal.
Also, he may or may not have had fleas.

She especially liked the one about the tower so tall and so pointy that it could cut a cloud in half, like a knife slicing through a soft piece of delicious cheese.
Diva loved cheese.

"There are always exceptions," replied Flea.  "They are what make you exceptional."


The rough and tumble cat of the world with a crook in his tail sitting next to the sheltered tiny dog wearing a red bow, the Eiffel Tower and the courtyard gate in the background, with them gazing at each other smiling, is a clear invitation there is a story to be told.  The limited color palette shown on the front of the dust jacket is used throughout the book.  On the back, to the left, an ornate oval frames their first adventure together.  The same design on the chapter titles surrounds the ISBN.

The opening and closing endpapers in the identical darker shade of green used in Flea on the dust jacket supplies the perfect background for the drawings in black of Flea on the left and Diva on the right. Their backs are to readers as they look at the Eiffel Tower and the courtyard gate respectively. Readers will want to take note of the initials carefully placed within a shell on each of them.  A gorgeous aerial view of the city of Paris with an altered gargoyle and Flea taking in the scene presents us with a second title page.  Each part of the book uses the same darker hue of green as a canvas for small drawings of Flea and Diva.

For his single page images Tony DiTerlizzi has drawn delicate scroll work around them.  His smaller illustrations are showcased by the creamy color element on the page.  Intricate details, exquisite shading and the perspective of looking at the world through a small dog's and large cat's viewpoint furnish readers with the proper atmosphere for this story.  The looks on the faces of Diva and Flea quickly secure our connection to these two adorable characters.

One of my many, many favorite illustrations is when Diva notices the dead mouse near the steps.  (I know exactly how she feels as one of the neighborhood cats left me a similar gift one morning.)  Her stance and expression leave no doubt as to her feelings at this discovery.  You can almost hear what she is saying before you read the text.

Having read The Story of Diva and Flea as told and shown by Mo Willems and Tony DiTerlizzi several times and parts of it repeatedly I know you are going to want to add it to your bookshelves at home and in your classrooms and libraries.  It's a tale of a dog and a cat who make big changes one step at a time.  It's a tale of bravery.  It's a tale of friendship between two furry friends and two remarkable names in the world of children's literature.