As a free-spirited, energetic canine Xena regarded any attire as intolerable.  Her fur was all she needed. Even in the thick of bitter cold winter she refused to wear booties to protect her paws. I did insist on the wearing of a collar when she left the house insuring people would know she had her rabies vaccine, a license and a phone number to call in case she became lost.  This did change on several occasions.

Between September 22, 2010 and January 20, 2012 Xena was a frequent visitor at my website "chatting" with students about excellent classes, lessons, libraries, books and reading.  Sometimes she would even sneak on the computer without my knowledge.  Here are the only two times in her life she wore extra head gear. For your convenience, in addition to the video below, the links are here and here for the two different videos.  For some reason Blabberize or perhaps Blogger changes the code so I get two videos alike.  If you want to see Xena in bunny ears follow the second link. 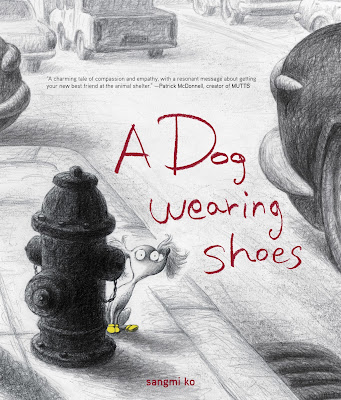 Other dogs enjoy or at the very least tolerate the wearing of clothing to assert their individuality or to make their humans happy.  In her picture book debut, A Dog Wearing Shoes (Schwartz & Wade, September 29, 2015), Sangmi Ko uses flashy footwear to draw attention to the plight of a dog.  He's about to get help.

One day, Mini was on her way home from Grandma and
Grandpa's, when suddenly---
Screech!!

Amid the thick of rush hour traffic sits a wee, bitty pooch wearing bright yellow shoes.  Mini and her mom stop in the nick of time.  Kneeling down outside the car, her mom calls to the little fellow who comes running.  No possible companion is in sight.  For the time being he will come with them.  Mini is thrilled.

At home Mini wants to keep playing with him but the dog is clearly upset.  Mom points out the obvious fact of him belonging to someone; he is wearing shoes, yellow shoes.  Mini thinks he needs a walk.  A red leash and collar are placed on the little guy.  His many clever virtues are revealed on their stroll through the park.

Well-meaning and enthusiastic Mini decides to demonstrate one more skill for the other dog lovers who have gathered when the worst possible thing happens.  The canine is on the run again.  A trip to the shelter the next morning raises everyone's spirits.

Mini has experienced first-hand the sense of emptiness when your dog is missing.  She now has a plan.  It works!  Mini and her mom have another plan.  It works too!


As a dog owner Sangmi Ko writes with emotional knowledge.  Based upon the true story of a family member, the events unfold realistically.  The logic of a parent and the eagerness of a child are clearly depicted in the conversations.  The love between the two is obvious as is the kindness in both their hearts.

Mini was so excited!
She sang a song,
took the dog's shoes off
and put them back on,
bonked their heads together,
and took a nap with him.


Rendered in pencil with digitized spot colors of yellow and red, Sangmi Ko has created a matching dust jacket and book case sure to draw reader attention.  Your eyes go from the title text, to the footwear and then to the wide-eyed look on the dog.  You want to know why a dog is wearing yellow shoes.  You want to know why he is looking bewildered on the side of a city street.  On the back, to the left, Mini is embracing the little pooch on a background of white.  The opening and closing endpapers are in the signature yellow.

Three pages of illustrations and the narrative precede the title page.  On the page to the left sits the dog surrounded by white.  The only illustration to the right with the text is a thrown stick; foreshadowing of Mini's new outlook.

Images range in size reflecting the story line and the ebb and flow of moods.  They may extend from edge to edge across two pages or a single page.  At times Ko will use small insets or half page loosely framed visuals.  They flow perfectly.  It's the eyes on her characters and their exaggerated expressions which will deliver huge amounts of humor.

One of my favorite series of pictures is those accompanying the text referenced above.  Mini and the dog howling mouths open, huge fixed grins on their faces as she takes the shoes off and puts them back on the dog, the wide-eyed look on both their faces as they touch foreheads, and the final two images of them zonked out sleeping and groggily waking up are touching and hilarious at the same time.  These pictures are full of animation.  Much is accomplished with the fine, detailed pencil lines here and throughout the book.


Tales of lost and found, lost and found and found don't get much better than A Dog Wearing Shoes written and illustrated by Sangmi Ko.  On the final page Ko includes five important suggestions regarding the adoption of a dog along with three websites to visit.  Brimming with merriment and warmth this is a must have for anyone with compassion for our furry friends.

Please visit the publisher's website to view more interior images from this title.  Julie Danielson, author, reviewer and blogger at Seven Impossible Things Before Breakfast includes this title with others about dogs.  There's lots of artwork and her insights.