You can't keep a Labrador retriever out of water.  Lawn sprinklers, puddles, rain, streams, ponds, and lakes beckon to their basic instincts.  If I was in the water floating Xena would swim around me for hours like an otter rarely going to shore.  If I was wading in the water or walking along the shore she would dive for rocks, haul them out, scoot them with her nose and dig deep holes to bury them. Unfortunately for her it was discovered something in the lakes, especially Lake Michigan, caused her to itch.

At first I started with a lawn sprinkler for her to run through on summer days.  That didn't work too well as she continually grabbed it, shook it and ran around.  Next was a kiddie pool with the creatures stamped in the bottom.  If I brought her out with the hose still filling it up, she would grab it and run spraying water everywhere.  She would bark and bark at those inanimate animals jumping in and out. She would run back and forth to the rock wall along my garden, grab a big rock and plop it into the pool, pushing it with her nose.  Once the water level was low enough, she would start to drag the pool around the lawn.  We went through several kiddie pools in her lifetime.

If summer were year round she would still be doing one of these things this very minute.  It was a battle to get her to come inside the house even when she was exhausted.  How did I know she was tired?  She fell asleep almost before I got her dried off with towels. 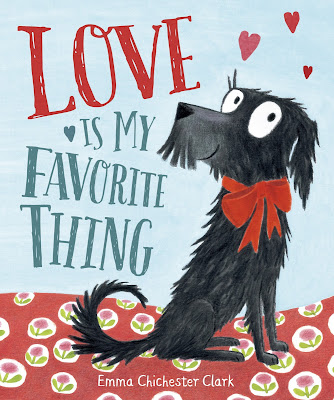 In Emma Chichester Clark's newly released title, Love Is My Favorite Thing (Nancy Paulsen Books, an imprint of Penguin Group USA, November 24, 2015) readers meet Plum who defines life as a dog dish half full.  Exuberance is her middle name.  And water is the beginning of her problems.

I AM PLUM,
but I love being called Plummie.
And LOVE is my favorite thing.

She doesn't just enjoy certain weather, she loves it.  Her cuddly toys, her cushy bed, favorite food and games galore, she adores...no loves...them all.  The two children next door, Sam and Gracie, and her humans, Emma and Rupert, are showered with her highest form of affection...LOVE.

Love given to her in return, even when she poos, makes her canine heart sing.  A walk in the park one fine morning does begin to unravel her enthusiasm.  She is warned not to play in the pond but Rocket's barks are the far greater enticement.  Emma is not happy.  Clearly being called a

signals a wrong move on her part.

The neighbor children can't believe she went in the pond.  Plum begins to wonder if Emma, Sam and Gracie still love her.  To ensure their devotion she scampers off to find them a present.  A tug-of-war ends in plume pandemonium.  Plum finds herself temporarily banished in the back yard for a breather.  Her worries about their love increase.

A return to the park, a summer afternoon, and little guys and gals everywhere with ice cream treats (at least to Plum's way of thinking) spell disaster.  Dismissed into the darkness of the downstairs, Plum despairs.  Love seems to have deserted this canine companion.  Is the door opening?  Is that Emma and Rupert?  Do they still LOVE this lover of LOVE?

Inspired by her own dog, a whippet, poodle and Jack Russell mix, named Plum, Emma Chichester Clark has most certainly written a narrative in the best kind of canine voice.  This dog's zest for life shines in each declarative sentence.  When she loves something, human requests and logic are abandoned with glee.  True to the nature of lovable and loved dogs, she immediately regrets her choice; eager to please once again.  To love and be loved, despite our lapses in judgment, is what we all want, isn't it?  As Clark knows well, through Plum, for dogs this is everything.  Here is another sample passage.

Water is one of my other favorite things!  I love it!
LOVE it!

PLUM! COME
HERE, AT ONCE!

The love for these illustrations rendered in watercolor and pencil begins with the adorable front of the matching dust jacket and book case.  The rosy red color with the pale blue and teal draws our focus right to Plum.  Who can resist those eyes, the mischievous grin, the furry face and curled tail all wrapped in a big bright bow?  To the left, on the back, two interior images frame the words

LOVE is Plum's favorite thing.
And that's why loving Plum is so easy.

Rosy red opening and closing endpapers heighten the atmosphere of happiness.  On the title page Plum gazes out the window of their apartment.  We find her running in circles around the dedication.  Each day is greeted with eagerness by this energetic canine as evidenced by the style of the pictures.

On some white space is predominant becoming an element with a collection of smaller visuals.  This is followed by a series of larger pictures grouped by two or as a single page image.  For emphasis Clark extends an illustration across two pages, edge to edge.  To highlight the passage of time and the comparison between her humans' wishes and Plum's decisions, a series of six panels are framed in rectangles of three across two pages.

One of my favorite series of illustrations is at the beginning when Plum is describing all those doggy kind of things she loves.  Nine small images depict her love of wind, not rain, snow, sun, her stuffed toy bear, bed, treats, catching and sticks.  The one of her in the wind is totally hilarious.  She is facing to the left, stiffened in the breeze, with the hair on her body and her ears blowing backward.

Every action is presented with lively body positions and expressive eyes (How does Clark convey such a breadth of emotion with a circle and a dot?) along with a spirited narrative in Love Is My Favorite Thing written and illustrated by Emma Chichester Clark.  From the cover to the final page readers are going to be smitten with Plum and the pleasure she finds in life, even if her humans are less than happy at times.  You can expect smiles, laughter and requests for read it again.  This is a must have for dog lovers and anyone who loves LOVE.

To discover more about Emma Chichester Clark and her other work please visit her website by following the link attached to her name.  You are going to want to visit Plumdog Blog where Plum has been talking about her life in words and picture for almost four years.  Emma Chichester Clark is interviewed at The Hiding Spot and Brightly about this title, her process, inspiration and other work. This title is one of several dog books featured by author, reviewer and blogger Julie Danielson at Seven Impossible Things Before Breakfast.