They come in a variety of shapes, sizes and colors each better suited than the other for a particular endeavor.  When people think of a bucket, they visualize a container, usually with a handle, for moving water or other items from one place to another.  Xena, my chocolate Labrador retriever, did define a pail in a similar manner but her creative nature saw it as much more.

For several years prior to us moving to the city in which I worked, Xena spent her days in doggy day care in that community.  Her caretaker has bred, raised and taught Labrador retrievers for decades.  Xena was the only resident allowed up at the house with the owner's personal dogs.  She had the opportunity to run in huge open fields all day.  But...

The caretaker said she had never seen anything like it before Xena was under her supervision.  Hour after hour Xena would take a pail and either watch it roll or carry it down a hill to a small stream they had on their property.  She would fill it with water, bring it up to the top, run around with it and then begin the process all over again.

At home this same activity would be repeated with her kiddie pool and a white five gallon pail.  When it was empty, she would bend and scoop the bucket up like a plastic hat.  It would bounce around on her head as she ran until it flew off. 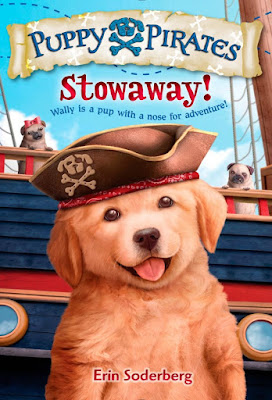 This inventiveness can be seen daily in our canine companions.  It is a survival technique as well as a source for the joy they make in their lives.  Puppy Pirates: Stowaway! (A Stepping Stone Book, Random House, July 7, 2015) written by Erin Soderberg with illustrations by Russ Cox highlights the ingenuity of a youngster seeking exciting escapades.

"Land ho!" Something small, fat, and squealing sailed through the air.  It landed on the fishing pier. "Plop!"
A golden retriever named Wally poked his nose out of the shadows.  He sniffed.  The thing was alive.  It smelled like a puppy.  But it looked like ... a pig?

So it goes Wally is first introduced to gold-toothed Piggly and her lacy-kerchief-wearing twin sister, Puggly, two pugs.  Wally, a recent runaway from the only place he has ever known, a farm, is searching for a new home where he feels wanted.  If he has thrilling experiences too, it will be so much the better.  He chooses to shadow these two new intriguing pups.

An exchange in an alley leaves him slightly discouraged but more determined than ever to join this crew of pirates.  What could be more adventuresome than being a pirate?  Using his wits and ability to wiggle he hides in a crate being carried over the water to the waiting ship.  Little did he know he is not the only stowaway!

Henry, a human boy, is an absolute expert on these sea rovers.  The duo decides to become pirate partners.  When their presence is noticed, Wally finds himself walking the plank.  This is not a good thing for a dog who does not know how to swim.

A word from the wise Old Salt gives Wally a temporary stay but Captain Red Beard issues a warning.  Suds, a secret ingredient, a climb to the top, and the Nine Lives repeatedly require Wally (Walty as the captain calls him) to put his best paw forward and think his way through these challenges.  Will this pup prevail?  Will Henry and Wally roam the seas with the rest of the howling hearties?


Short, brisk chapters set the pace for this spirited tale penned by Erin Soderberg.  Replete with pirate jargon, hilarious dialogue and rollicking descriptions, readers will feel as though they are right in the midst of all the action.  Character personalities shine in their names, what they say and in what they do.  Here are some sample passages.

Just that morning, he had arrived at this city by the sea.  It was full of hustle and bustle.  Horse-drawn carts pulled lazy humans.  Small fishing boats hauled nets full of tasty tuna.  Beautiful ships with fancy masts dropped their anchors in the harbor.  This place even smelled like adventure.  Wally had noticed it also smelled like rotten fish and sweat---but mostly adventure.

As the shadows in the alley stretched and yawned in the late-afternoon sun, one of the pups cried out, "Aye, the pirate's life's for me!"

Wally noticed that as soon as Old Salt spoke, the whole crew sat and listened.  After the old dog hacked up a fur ball, he said, "This pup might be little, but weren't we all little once?"
"Not me," muttered a huge Great Dane.


The full color artwork tinged with historic and canine detail on the front cover is out-and-out cute. The initial title page features Henry, Wally and four other crew members in their appropriate garb.  Each chapter number is encased in the puppy pirate logo shaded to have the texture of a paw print.

Full page images with bleeds across the gutter, half page insets, single pages, edge to edge, and half horizontal double-page pictures rendered by Russ Cox further endear readers to the characters and their activities.  Fully animated expressions on their faces, body postures and seaside and on-board settings will have readers smiling.  One of my favorite illustrations is when Henry reads the label on the can of the "secret ingredient" Wally has dumped into Steak-Eye's, the cook's, stew.  Henry has a look of disbelief on his face.  Wally is on all fours kneeling in a corner, paws over his eyes.  You know it can't be good.  The explanation is downright funny.


Puppy Pirates: Stowaway! written by Erin Soderberg with illustrations by Russ Cox is a lighthearted look at a pup longing for family and adventure.  This is the first in a planned series of six.  I know these books will never be on the shelves, being passed from reader to reader.  The second title, X Marks The Spot, was released at the same time as this book.

For more information on Erin Soderberg and Russ Cox and their other work, please visit their websites by following the links attached to their names.  Erin Soderberg was interviewed at HenryHerz.com---KitLit, Fantasy & Sci-Fi.  She is also a guest at Scholastic's Ambassador for School Libraries, John Schumacher's blog, Watch. Connect. Read.  Follow this link to access Russ Cox's blog.  You can read interviews of Russ Cox at KidLit 411, Inkygirl.com hosted by author illustrator Debbie Ridpath Ohi and Andrea Skyberg 's site.  To view interior images make sure you visit the publisher's website.