Sixteen years ago, nearly to the day, my husband and his youngest brother died in an automobile accident.  Month after month I barely existed.  On August 21, 2000 a small chocolate Labrador female puppy was born; the runt of the litter.  For us it was love at first sight.  I named her Xena after the television warrior princess realizing strength was essential for her survival.   She was so small it required feeding her three times a day.  I was allowed to have her at school in a crate in my office. (I let her out quite a bit thanks to my principal, Dick Swenor.) During story times she would sit on my lap as I read to the students.  She saved me; filling my life with joy. 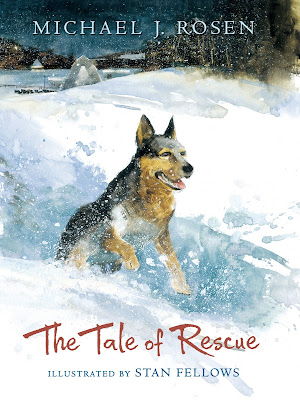 Different breeds of dogs are known for particular traits.  One thing they have in common is their ability to know when they are needed. A dog guy to the core and author Michael J. Rosen (The Hound Dog's Haiku and Other Poems for Dog Lovers) has penned a remarkable story about a cattle dog who accomplished a feat out of the ordinary.  The Tale of Rescue (Candlewick, October 13, 2015) is a tribute to this dog, to all dogs, who do as they have always done.  They save us one heart at a time.

After reading about the life of the cattle dog and her farmer in the first few pages, we are introduced to a family of three.  This mother, father and their ten-year-old son are staying in a cabin which is part of a local lodge in this region of Ohio near the Appalachian Mountains.  Living in Florida they wanted to give their son a winter with snow.  Each day of their stay they experienced the beauty the season has to offer; cross-country skiing, hiking through a foot of snow, building snowmen, sledding and snowball fights.  On their last day a final morning walk before breakfast to the lodge quickly turned into all the makings for a tragic end.

As the weather is apt to do, a sunny day clouded over and within no time at all they found themselves in a whiteout.  Even though they were close to their destination, nothing was visible to them.  Retracing their steps back to their cabin was fruitless as the flakes were falling at a rapid rate filling in their tracks.  The drifts of heavy wet snow were soon at the height of the boy's waist.  Fatigue, the cold and lack of nourishment weighted their progress.  The helplessness of not being able to get your bearings in this kind of weather added to their growing panic.

By the time, hours later, when the snow subsided they were surrounded by four feet of it.  They trampled down a small circular den of sorts and huddled together.  Shouting would not help in the wild and wicked wind but the father every so often managed to thaw his lips enough to send out a piercing whistle.  This storm was not finished.  Freezing rain descended leaving a thick crust.

Back at the farm the wintry fury had sent the cattle dog working her hardest to herd the forty cows back to safety.  Now at rest her ears perked.  Had that been a whistle?  This was a new kind but it called to her.  It was a treacherous journey to find the source of the whistle.  Initially leery the parents soon followed their son's lead warming the frozen canine with their stiff chilly hands.  All too soon she left them.

She did awaken the farmer but all her attempts to make him understand failed.  It was now dark. The time for the trio with the dropping temperatures was shortening.  With the spirit of her kind and the work she had been trained to do, this cattle dog with a name only known by one got busy.  Eight years later this tale continued out of deep gratitude and affection...and

Yet stories do not always have the ending we imagine they will.


Michael J. Rosen writes with the sure knowledge of dogs, setting and family.  His sensory descriptions of each are eloquent and brimming with emotion.  You are inside the story with every single page turn. Here are several sample passages.

The paired hearts of deer tracks stamped in the snow, stalactites of icicles along their cabin's timber eaves, snow angels, frost-crazed windowpanes---their snapshots captured every wintery thing they'd never encountered in Florida.  ... Out the cabin's windows the ground glistened like finely grated diamonds---the sand at the beach near their home did the same thing---when the sun pried a hole in the cloud cover.

The family plodded ahead, single file:  The father shoved and tromped the snow to make the passage easier for his wife; she did the same for their son.  The wind's blasts slapped their faces; every tear and bead of sweat burned their skin.  They had to squint so that the snowflakes would melt on their lashes instead of stab at their eyes.

Raced would have been the right word if the field were anything but four feet of compacted snow capped with ice.  A heeler's legs, remember, are twelve inches long; the snow was four times that...in its lowest spots.  Even the dog's nose reached no higher than thirty inches when she craned to sniff. This time, racing meant smacking hard into the crusted snow and slipping---one foot punching through the shell of ice, stumbling, and scrambling to get both feet repositioned.

The boy rested his cheek on the dog's chilled and soaked coat.  When a tear spilled across his cheek, its warmth surprised him---the furnace inside him could still heat the water in his eyes.  A second later, it cooled on the dog's cold fur.  But as he held his face against her silver-black coat, her body's heat rose and eased the frost's rawness on that patch of his skin.


The watercolor painting rendered by Stan Fellows spanning the front and back of the dust jacket is a lovely look and introduction to those interspersed throughout this title. Twenty-seven more images enhance the story beginning with the double-page picture of the farm on the title page as the cattle dog chases a cow home to the barn.  Most of the illustrations are on single pages but the one two-page wordless illustration clearly depicts the family's plight in the whiteout.

His use of light and shading are exquisite; not an easy task in snowy scenes.  His brush strokes capture the essence of every scene captivating the reader with the intensity of the moment.  With great skill he brings us into the image with his use of perspective.

One of my favorite illustrations is the one of the cattle dog opposite the first chapter page.  She is seated on a hill with the pastures, few clouds and rays of sunlight in the background.  Her gaze is shifted to the right of the page, neck turned as if listening.  Ears alert, tongue hanging out, she looks ready to spring into action.

The Tale of Rescue written by Michael J. Rosen with illustrations by Stan Fellows is a heart-pounding story of survival and a heartwarming story of a dog doing the work they love. You can't stop reading it once you begin.  It would make for an outstanding read aloud.  It has my highest recommendation.

To learn more about Michael J. Rosen and Stan Fellows and their work please follow the links attached to their names to access their websites.  A portion of the two-page picture I referenced earlier can be viewed at the publisher's website.  Enjoy the book trailer.


Yesterday afternoon my sweet Xena passed away.  To honor her I will be writing fifteen blog posts about fifteen dog books recently published.  For those of you interested here is an Animoto in tribute to her.


To further highlight her life I am giving away a copy of Michael J. Rosen's two books mentioned here.