To Be Seen To Be Recognized

In the early hours of yesterday morning, after finishing up a writing project, my canine companion and I took a stroll around our backyard.  As we were approaching the house, she began to growl.  She became more and more agitated.  As a mere human, looking into the night and listening, I still had no clue as to the cause of her upset.  Nevertheless, we scampered up the deck steps and into the house.  After turning on the backyard lights I swirled around as her barking increased to look at one of the biggest opossums I have ever seen running across the patio tiles. 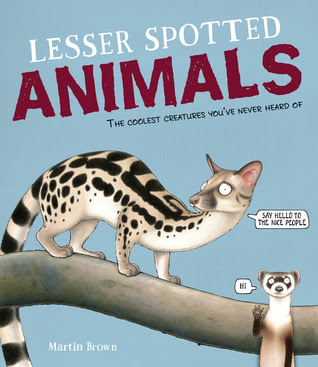 To state the obvious, if you don't see something, you really aren't aware of it sharing your living space.  What can be described as upbeat, informative and completely hilarious Lesser Spotted Animals: The Coolest Creatures You've Never Heard Of (David Fickling Books, October 6, 2016, Scholastic, Inc., February 2017) written and illustrated by Martin Brown introduces us to twenty-three animals about which we rarely encounter in books.  Readers will finish this title after visiting small, almost hidden, sections of land and vast areas around the globe with a greater respect for these creatures and the need to preserve and protect their habitats and lives.

The five paragraph introduction begins:
FED UP WITH THE SAME OLD ANIMALS?  HAD ENOUGH of hippos?  Bored with bears?  Tired of tigers?  Do you want animals that are fresh, new and exciting?

A diet of nearly 20,000 termites a day is a staggering figure but to a Numbat, a marsupial residing in Australia, it is a culinary feast.  And here's another interesting little tidbit; it has no pouch for the baby numbats.  Crossing to an island in the Caribbean we find the Cuban Solenodon which is a rare, dangerous and remarkable nocturnal being.  It actually has a ball-and-socket joint in its nose.  Do not, if you should ever see one, let it bite you.

On the continent of Africa there are two animals making their home in the southern portion who are almost neighbors.  The Lesser Fairy Armadillo and Zorilla use armor and stink respectively to protect them.  To give you some perspective skunks smell like roses compared to a zorilla.

Java, Indonesia is the only place on earth where the Silvery Gibbon can be found.  They are endangered because they are struggling for a place to live sharing the island with a huge human population.  As beneficial as bees the Dagger-Toothed Flower Bat flies throughout the islands of Southeast Asia and even into northern Australia.

A mouse that's not a mouse, a insectivore with a nose having four distinct uses, a rock-dweller with a name that should be on a Hollywood screen, a wild ass which runs at an astonishing speed and a critter so sneaky it can make its cat-like shape appear to be a snake are given places in these pages.  Kangaroos are mentioned more frequently than wallabies but the Yellow-Footed Rock Wallaby is in a class all by itself for beauty and leaping from dizzying heights in its rocky abode.

You would think you would have heard of a cow more than six feet tall, nine feet long and weighing up to 2,200 pounds but have you ever read about a Gaur?  Sand-hiding cats, bottom-of-the-world dwelling dolphins living in groups of a thousand, red, gray and golden descriptors for three endangered primates, critically endangered grassland antelopes of Kenya, the most massive population of large seals, a rabbit relative with exceptional grass-gathering skills for surviving winters, disappearing duikers and the comeback-kid Black-Footed Ferret are presented.


The manner in which Martin Brown weaves facts into easy conversation brimming with humor captivates and fascinates on the first page.  For each of the showcased animals he provides their name with a clever remark underneath referencing a distinctive quality.  There is a half to whole page discussion revealing their most intriguing aspects.  He includes in a sidebar their size, what they eat, where they live, their status on the threatened list and an extra fact.  At times Martin will include an additional sidebar with other items of interest.  Here are some sample passages.

...And although skunks might be able to pack a punch with their powerful fumes, it's a relatively local stink.  The stench delivered by the zorilla is even more potent and can be smelled nearly a mile away.  Imagine what it must be like up close!

Next time your dog lets out a mutt-fart just be thankful you don't have this two-tone African stinker for a pet.

SHH! STAY STILL.  YOU'RE IN THE JUNGLE.  THE EERIE, STEAMING, INKY-BLACK
of an Indonesian jungle at night.  The air is heavy and alive with clicks and hoots and howls.  Everything smells musty and damp.  You are standing in a small open patch of rain forest, halfway up a remote ridge on the island of Sumatra, and you're waiting for a banded linsang to come along.  It might be a long wait.


From the expressions on the animals' faces (wide-eyed looks) and comments on the front of the matching dust jacket and book case, it's a given this book is anything but ordinary.  When readers' eyes move to the left of the opened jacket and case a wary Speke's Pectinator whispers EEP!  Above him are postage stamp comical portraits of five of the featured creatures.

Delicate details and fine lines are filled with realistic but somewhat muted hues.  Each animal is given an entire page with elements sometimes extending over the gutter. (or half a body as in the case of the gaur)  Contributing to the humor Martin may have his animals making remarks.  These usually refer to something mentioned in the longer narrative.  As on the back of the jacket and case smaller framed-drawings are used to prove a point and extend comic comments for almost all the creatures.

One of my many favorite illustrations is for the Dagger-Toothed Flower Bat.  The background color is a chocolate brown.  Along the top of the page four bats with wings wrapped around them like blankets are hanging upside down.  All of them with the exception of the one on the far right has bowed heads and closed eyes.  The one on the right is looking down with a question mark within a thought bubble.  It is looking at the bottom of the page.  Along the bottom is the tail of the Long-Tailed Dunnart extending from the next page.


The copy being used for this blog post was found at the public library but after reading Lesser Spotted Animals: The Coolest Creatures You've Never Heard Of written and illustrated by Martin Brown, this reader will be acquiring several copies; one for my personal collection and more to hand out to eager readers.  One of many very important aspects of this title is found in the final paragraph:

So maybe the black-footed ferret shouldn't be in this book at all.  It's not so lesser spotted anymore.  But, perhaps, it shows that being better known helps you have a future---and that is what this book is about.  1,000 black-footed ferrets isn't many---but it's better than 18.

Martin Brown dedicates two pages to a glossary at the end.  He also explains the eight terms assigned to threatened species.

Martin Brown does not have a website but he is the illustrator for the hugely popular series, Horrible Histories.  You can find a little bit about him there.  Martin talks about his work and this book in a guest post for The Federation of Children's Book Groups.  He also talks about this book at London Mums.  Martin is interviewed at Paper Nations on March 6, 2017.  For a look at the jacket/case of the UK edition follow this link.  The Classroom Bookshelf at School Library Journal features this title.
Posted by Xena's Mom at 7:47 PM