Holding On To The Dream

Everyone has dreams.  We hold hope in our hearts for the realization of our deepest aspirations, immediate or years in the future.  We long for the goals of family and friends to be met. 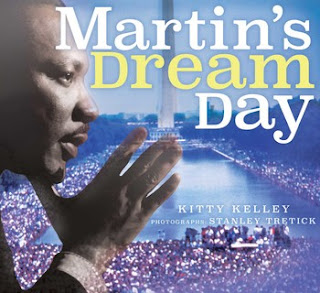 There are people who have dreams beyond themselves, their family and friends.  These people dream big.  Their aims reach immeasurable heights with lasting results.  One of these people was Dr. Martin Luther King, Jr.  Biographer Kitty Kelley has written Martin's Dream Day (Atheneum Books for Young Readers, January 3, 2017) with the remarkable photographs of Stanley Tretick as illustrations.

Martin Luther King Jr. was nervous.  He had been up all night writing what would become the most famous speech of his life.

Soon he would deliver words written from his heart to more than 250,000 persons of all ages from all walks of life gathered before him as he stood at the foot of the Lincoln Memorial in Washington, D. C.  He was taking a stand and making a statement for equality for all.  At this time in history, African Americans were denied basic civil rights and freedoms.

Martin Luther King Jr. had preached about this.  He had lead people in nonviolent protests of all kinds.  He had been persistent.  He had wanted to make this dream come true in his lifetime so he went to speak with President John F. Kennedy in Washington D. C.  It took months and numerous visits but he finally convinced the president this issue was not to be ignored.

President Kennedy made an impassioned speech on television.  He sent the civil rights bill to Congress.  It did not pass.  Martin Luther King Jr. pursued his vision by organizing one of the largest marches ever seen in Washington, D. C.  The year, 1963, was one hundred years after President Abraham Lincoln's Emancipation Proclamation.

Did you know people around the world offered their support for this march by holding similar marches in their countries?  Even though it was a hot 28th day in August people lined the Reflecting Pool and crowded around the Lincoln Memorial.  It was so packed with people Marian Anderson could not make it to the front to sing The Star Spangled Banner. Camilla Williams sang it in her place.

After reading from a prepared speech, an encouraging shout from a friend caused Martin to abandon those words and speak from the passion stirring in his soul.  Those words, his dream laid before all those people, will resonate in history forever.  In the following year,

President Lyndon B. Johnson signed into law the Civil Rights Act of 1964.


It is a gift to be able to make an event occurring more than fifty years ago seem as though it happened yesterday.  The inclusion of specific details, background information leading to the event and quotations bring readers to the time and place with accuracy.  Author Kitty Kelley does this through her research and vivid descriptions.  Here is a sample passage.

But his efforts for change were not enough.  He knew he needed something more to make his dream come true.  He decided to go to Washington, D. C., to talk to the president of the United States about equal rights.  "The time has come, Mr. President," Martin wrote to John F. Kennedy, "to let those dawn-like rays of freedom...fill the heavens with the noonday sunlight of complete human dignity."


The matching front dust jacket and book case truly draw our attention to this book.  We have seen pictures of Martin Luther King, Jr. and pictures of the day he gave his Dream speech but to superimpose the one on the other is striking.  Using those purple and blue hues gives the image a regal quality.  To the left, on the back, the first line,

"I have a dream that one day this nation will rise up and live out the true meaning of its creed:
'We hold these truths to be self-evident, that all men are created equal.' "

is placed in the same yellow shade as seen on the front over a black and white picture of that day.  Sky blue colors the opening and closing endpapers.

An initial title page shows the mass of people gathered for the speech with the logo for the March placed over it.  On the formal title page (covering two pages) another photograph of the marchers shows them holding signs.  For the dedication page (another two pages) a black and white photograph shows all kinds of people sitting along the Reflecting Pool dangling their legs in the water with others standing behind them.

These photographs taken by Stanley Tretick selected to illustrate the text written by Kitty Kelley are authentic representations for her narrative.  Most of them are in black and white.  At times a series of images will be linked together like negatives.  This is especially effective in pacing and emphasis.

What readers will notice was the dignity and peaceful purpose of all those featured.  The men, women and children were attired in their best clothing.  This was a serious endeavor with hope for lasting results.

One of my favorite photographs is the view from the Lincoln Memorial on that day in August 1963.  A mass of people outline the Reflecting Pool stretching back to the Washington Monument in the distance.  In the foreground two American flags wave.


Martin's Dream Day written by Kitty Kelley and illustrated with photographs by Stanley Tretick is an inspirational narrative about a day which changed the course of the civil rights movement.  The manner in which the narrative flows offers information which places the speech in a clearly-understood historical context.  I know you will want to add this important book to your professional bookshelves in your libraries and classrooms.

To learn more about Kitty Kelley please follow the link attached to her name to access her website.  Kitty Kelley is interviewed about this title at Time For Kids.  You can view interior pages at the publisher's website.
Posted by Xena's Mom at 7:56 PM