Every being has a talent which sets them apart.  If you were to ask a group of students to write down the one thing for which they are the most adept, you would get a few similar answers but most would have replies as unique as they are.  For some this skill is apparent when they are young.  For others the gift will not shine until hope is nearly lost as to excelling at anything. 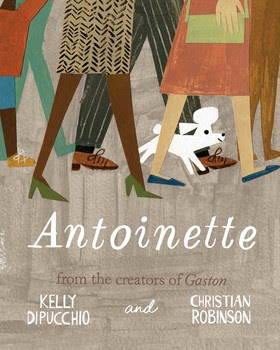 Mrs. Bulldog watched her puppies race through the yard.

She names each one---

If you think those names don't quite mesh as a foursome it's because the first three are bulldog brothers and their sister puppy is a poodle.  The boys' gifts are already shining, clever, fast and strong.

Antoinette is not sure yet about what makes her special.  Her mother, Mrs. Bulldog, cheers her on with encouragement.  She is sure Antoinette is an extraordinary being.

Each day Mrs. Bulldog and Mrs. Poodle take their puppies to the park.  Rocky, Ricky, Bruno and Antoinette love to play with Fi-Fi, Foo-Foo, Ooh-La-La and Gaston.  (Antoinette's affection for Gaston is apparent.)  In the middle of their play one day, the mothers notice something is wrong.  Ooh-La-La is missing.

Antoinette's three brothers use their skills to attempt to locate Ooh-La-La but she is not to be found.  Antoinette wants to bring the missing Ooh-La-La home.  She puts her nose to work winding her way through the streets of Paris with courage and determination.  Nearing the city museum Antoinette starts barking as the canine crew follows close behind her.

Are dogs allowed in the museum?  They are not.  One persistent poodle is about to find her skill and a good friend as she woofs and weaves her way through the crowd.


It's clear Kelly DiPucchio enjoys fashioning a playful undertone with words throughout her narrative.  Several times during the story she repeats groups of words which are simply fun to read out loud.  You can't help it!

During the search for Ooh-La-La she creates a cadence as each brother employs their skills. Further rhythm is felt in her comedic puns and use of alliteration.  Here is a sample passage.

Well, unlike her burly brothers, she still hadn't quite discovered what she was good at.
"Chin up!" barked her mother.
"You have something extra special.  I can feel it in my bones!"


Looking at the opened, matching dust jacket and book case you can feel a question forming in your mind.  Why is Antoinette racing through the crowd of people?  The image stretches from the back, left, edge to the front, right, edge.  All the people seem to be in a hurry, walking in full stride, just like Antoinette.  There's something alluring about the brush strokes Christian Robinson uses in painting his background.  If you run your fingers over it with little imagination it feels like pavement.  The title text is raised.

The brown skirt patterned in blue flowers with green leaves worn by one of the people (on the back) is used on the spine and the opening and closing endpapers.  The title and verso pages have a white background highlighting activity from the street as Antoinette races along with the vehicles, a scooter and rider and a bicycle rider.  Rendered in acrylic paint all the pictures are like frozen moments of animation.  You expect them to leap to life at any second.

When Christian Robinson paints in this book, first you focus on the puppies and Antoinette but then your eyes drift over all the details he places in each scene.  You'll notice the bluebirds drinking from the birdbath in the yard, the place setting for one person in Mrs. Bulldog's home, the interpretation of the words clever, fast and strong for the brothers, the butterfly in the park, the bubble blower, the activities of the people on the Paris streets and in exactly which museum Ooh-La-La is discovered.  The heavy, matte-finished paper is ideal for Christian's style in these images, nearly all spanning two pages.

One of my favorite illustrations is when the four puppies are in the living room of Mrs. Bulldog's human's home.  The background is a darker khaki color on the walls and floor.  A single painting hangs on the wall, a large circle of rusty red on black.  Rocky the clever is seated in a wagon attached to Ricky the fast.  To entice Ricky a stick is holding a bone on a string over his head.  Rocky is indeed clever.  Bruno the strong is lifting up the edge of the sofa to get a ball.  Antoinette is seated on the sofa wondering how she is special.


This book, Antoinette, written by Kelly DiPucchio with pictures by Christian Robinson is a celebration of the singular skills each person can and will discover within themselves.  For those not sure where their talents are, this book will inspire them.  You could not ask for a better companion title to the first book, Gaston.  I think you will have multiple requests for read it again.

To learn more about Kelly DiPucchio and Christian Robinson and their other work please take a few minutes to explore their websites by following the links attached to their names.  Kelly DiPucchio maintains a blog which is linked to her name.  At the publisher's website you can view six interior illustrations.  Christian Robinson is a guest on The Horn Book podcast 1.33 October 17, 2016.
Posted by Xena's Mom at 11:20 PM