Reaching a hand in my pocket I brush my fingers over the five smooth stones.  For decades they have been my constant traveling companions, in a jacket or pair of jeans, on the dashboard of the car or on the kitchen window sill, ready for our next adventure.  Are you thinking, why five smooth stones?  According to accounts David had five stones with him when facing Goliath.  It wasn't that he lacked courage or faith but he believed in being prepared.  Goliath had four other family members. 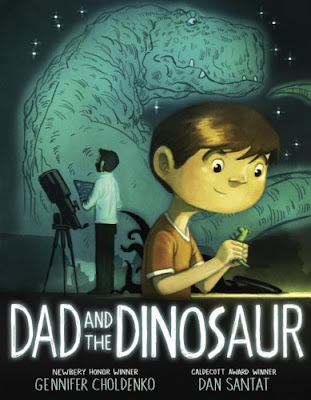 My dad, one of the most courageous people I have ever known, I learned a few years ago carried a small New Testament Bible, a gift from and inscribed by my mom, with him always during World War II.  He was stationed in the Aleutian Islands for more than a year.  Bravery comes in all shapes and sizes.  Sometimes we can hold it in our hands.  Sometimes we hold it in our hearts.  Sometimes something we hold in our hands places it in our hearts.  Dad And The Dinosaur (G. P. Putnam's Sons, an imprint of Penguin Random House LLC, March 28, 2017) written by Gennifer Choldenko with illustrations by Dan Santat is a story of finding courage and the love fathers can lend to this discovery.

Nicholas was afraid of the dark outside his door, the bushes where the giant bugs lived, and the undersides of manhole covers.

To Nicholas his dad feared nothing.  In order to go where he feared to go and do what he feared to do, Nicholas had the help of a dinosaur.  It was a small toy replica which fit nicely in his hand.

Dinosaurs were not afraid of anything.  With this dinosaur by his side, Nicholas had the same courage as his dad, Big Nick.  One evening his mom told his dad how he bravely climbed a rock wall.  She mentioned how Little Nick seemed to have inherited the same can-do spirit found in Big Nick's family.

If Nicholas could not hold the dinosaur he would tuck it in a safe spot or tie it to himself with a handy chord.  If you were to peek under Nick's pillow at night, you would find his dinosaur there.  One day a game of soccer was played against a formidable foe.  To Nick a dinosaur could beat a Gorilla, the nickname for a goalie on the opposing team.  He scored!

The game was won but Nicholas felt lost.  His dinosaur was missing!  He could not tell his mom.  He was miserable.  Much later, after Little Nick had gone to bed and was having his worst fears visit his dreams, Big Nick came home.

Sometimes acknowledging fear is an act of bravery.  Dads are good at being our best helpers.  And our secrets are safe with them.

celebrate all the many great dads she knows.

With this part of the story in place plus the great word choices and blend of narrative and dialogue, his dad's response to the lost dinosaur is more deeply felt by readers.  We want to hug Little Nick and Big Nick.  Here are two sample sentences.

Dinosaurs like the dark, bugs are nothing to them, and they eat manhole covers for lunch and everything under them for dinner.


When first looking at the matching dust jacket and book case for this title, with no knowledge of the story, you feel a sense of mystery.  You are asking yourself about the connection between this dad, his son, the son's dinosaur and the larger than life dinosaur amid the stars.  Within an oval on the back, to the left, the dad and son are looking through the telescope together.  On the jacket and case, the choice of color palette heightens this feeling of something important to be discovered.

On the opening endpapers we zoom in to see the lower half of the boy's body.  He's wearing a soccer uniform with one knee raised and his foot on the ball.  Careful readers will see the toy dinosaur peeking out the top of his sock where it's been placed.  On the closing endpapers the first image has an added character in the background.  We can now see the entire boy's body.  On the black background of the title page a hand is extended toward the text.  Resting in the palm is the toy dinosaur.

Rendered in pencil, watercolor, ink, acrylic and Photoshop these illustrations by Dan Santat extend page edge to page edge on two pages.  His perspectives in this title are marvelous.  In the first picture the boy is opening the back door, stepping outside cautiously toward his father.  With a page turn we move close to only the boy's hand holding his dinosaur on the left with the dinosaur from his mind's eye extending across the sky over his dad on the right.  In another situation Big Nick is watching a video of his son playing soccer on the left while talking with Little Nick on the phone who we see on the right.  Little Nick is very close to us.  These altered points of view contribute to the outstanding pacing.

One of my many favorite pictures is at the beginning of the narrative with Little Nick striding outside at night.  He is swinging his arms in confidence as he holds the dinosaur.  Behind him on the left and stretching across the gutter to the right is the huge dinosaur.  It's gobbling up a manhole cover and one of the things underneath it.  Groups of stars outline the dinosaur's body.  We are looking slightly up at Nicholas.  It's a great angle.


This book, Dad And The Dinosaur written by Gennifer Choldenko with illustrations by Dan Santat, will be a welcome addition to bookshelves at home and in school and public libraries.  The theme is universal for who among us has no fear?  And how many of us over the years have carried objects to give us courage?  Thank you Gennifer Choldenko and Dan Santat because you both get it...you really do.

To discover and learn more about Gennifer Choldenko and Dan Santat and their other work, please visit their websites by following the links attached to their names.  Dan Santat also maintains an Instagram account.  You can view the opening endpapers at the publisher's website.  Don't miss the book trailer premiere at teacher librarian Travis Jonker's blog, 100 Scope Notes, located at School Library Journal. You will enjoy reading the comments from both the author and the illustrator.
Posted by Xena's Mom at 12:30 AM