The Best Of Friends Forever

She stood on all four legs on the console between the seats for nearly thirty minutes.  Her body leaned into mine as I drove carefully and slowly, her head, heavy from sedation, hung over my shoulder.  From time to time she would let out a low whimper or groan.  As soon as we arrived home, I carried her into the house placing her in her bed next to my desk.  She immediately fell into a deep sleep.  How she managed to stand next to me as she always does when riding in the car is a testament to her strength.  I am humbled by her loyalty.

My sixth month old puppy, a chocolate Labrador, Mulan swallowed a glove in mere seconds after a group of disc golfers came to pet her Sunday afternoon. It will remain a mystery how it happened.  I immediately took her to the emergency room where she was x-rayed and endured an endoscopy.  That she suffered this through no fault of her own breaks my heart but once again I have learned from a dog, my dog.

I have decided to honor Mulan's steadfastness with two books about the bond between a girl and her dog written by a woman I have never met but who shares my deep love for our canine creatures.  Penny & Jelly: The School Show (Houghton Mifflin Harcourt, July 7, 2015) written by Maria Gianferrari with illustrations by Thyra Heder is humorous and heartwarming.  It's friendship at its finest.

The Peabody Elementary School Talent Show was an annual tradition.
All of Penny's classmates were participating.

As soon as school was out that day, Jelly met Penny and helped her list those things at which she was most skilled.  It seemed Penny thought she was good at them but in practice a tuba really could sound awful, smashed fruit was not a good sign for a juggler, animals heading for the hills was a less-than-stellar indication of yodeling expertise, Jelly grabbing your "baton" ended a twirling session and wrapping a jump rope around your pooch pal was unacceptable.  Penny needed to find a talent and find it fast.

The twisted rope around Jelly gave her an idea.  Jelly was not happy with the results.  Agility as a ballroom dancer ended quickly.  (You don't need to hide under the bed, Jelly.)

When Penny tried to emulate Adelaide Hermann Jelly did not disappear in a cloud of ... flour.  The list of possibilities grew longer until Penny had to face facts.  After trying every single one, she was not a success at any of them.

A very dejected girl and her constant buddy hid in their sanctuary, her closet.  In no time at all Jelly had a great idea.  Like all her canine predecessors she voiced her opinion.  At the talent show a new honor was given.  Can you guess what it was? 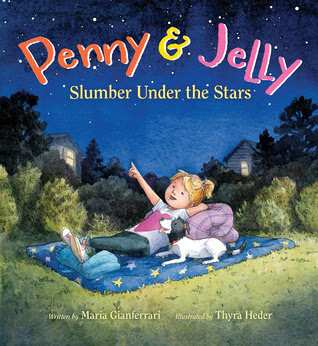 Penny and Jelly return in their second adventure, Penny & Jelly: Slumber Under the Stars (Houghton Mifflin Harcourt, June 14, 2016) written by Maria Gianferrari with illustrations by Thyra Heder.  These irrepressible and inseparable characters have a new difficulty to face.  Will a solution be found through teamwork?

That night Penny displayed constellations on her bedroom ceiling pointing out favorites.  They would look for these beneath a real sky the next night.  Penny's four friends were as thrilled by the sleepover as Penny when she called them the next morning.

When making a list of things to take Penny discovered a glaring predicament.  Number five was Jelly.  The sleepover invitation specifically said

If she couldn't take Jelly, Penny would have to make the next best thing.  This was a problem, too.  A

did not have a tongue for doggy kisses, fur for cuddling or a nose for sniffing.  Twelve more Jelly imitations were created and failed to even remotely resemble all the wonder found in the real Jelly.  Surely you too can see the problems with a Vegetable Jelly, a Pipecleaner Jelly or a Jelly Jelly.

As night settled over the neighborhood Penny needed to gather her gear and head to the sleepover, but she simply could not leave Jelly.  When your heart is in the right place, an answer will present itself.  Look, there's Sirius, the Dog Star!


With repeated readings of each book, it is abundantly clear Penny and Jelly are the kind of individuals every reader hopes will be their best friends.  Using a blend of narrative and dialogue, human and canine, Maria Gianferrari invites us to participate in the relationship between this effervescent, happy-go-lucky girl and her patient, faithful friend.  In each book Penny's thinking to herself and her lists are integrated into the story.  Each time a problem presents itself, she methodically works her way to a solution.  This girl does not give up!  Here are two sample passages, one from each book.

"Ooh! I'll be a doggy fashion designer," said Penny, "and you'll be my model!"
Penny rooted through her drawers.
She cut.
She tied.
She painted.
She pasted.
VOILA!
Jelly shook.
Jelly jiggled.
Jelly rolled.
Riiiip.


"Ruff-roo-roo," barked Jelly,
batting a ball of yarn.
"Yes! A yarn Jelly will be perfect!'
Penny knitted.
She looped.
She braided.
She hooped.
It sort of looked like Jelly,
but Yarn Jelly was too soft.
No click-clacking nails.
No wig-waggling tail.
A bit too frail.
This was not the real Jelly.


Upon opening the matching dust jacket and book case on both books readers are not only privy to the joy of a shared experience between a girl and her dog, but by looking to the left, on the back, we get hints of events to come.  On the first book we zoom in to see bits and pieces of materials used in crafting doggy fashion for Jelly.  On the second book it's an extension of the night scene in Penny's and Jelly's back yard.  Underneath a large tree are some other Jelly creations among invited guests. (That's all I am going to say.)  The opening and closing endpapers in book one are pale lavender.  On the opening and closing endpapers in book two we see a night sky with lines connecting the starry constellations.

The happiness continues on the title pages.  In the first Penny is standing in front of an easel as Jelly looks at her.  She is trying to think of a talent.  The cozy scene on the second title page is of Penny and Jelly lying on a blanket outside at night.  They are both gazing upward.

All the illustrations are rendered in watercolor, pencil and ink by Thyra Heder.   Her publication and dedication pages following the titles pages host a two page image closing in on the announcement for the talent show and then the sleepover.  The first is part of a bulletin board outside Penny's classroom.  The second is rolled up inside Penny's mailbox at home.  Jelly is peeking out the front window.  Penny has taped a small paw print to the mailbox.

Many of the images span two pages.  To provide pacing and show the thought processes several pictures may appear on a single page.  At times for emphasis Thyra will bring us close to the elements in the illustration.

The delicate lines, soft colors, facial expressions and body postures on both Penny and Jelly will endear readers to the story and the characters.  Penny and Jelly are portrayed both as delightfully typical and completely their own perfect individuals.  Readers will find humor over and over again.

One of my many favorite illustrations in book one is of Jelly all decked out in Penny's fabulous fashions.  It is on a single page.  She has a two-tone pink polka-dotted bow around her ears.  A boa is wound around her neck.  Two different colored socks are on her front paws.  Paper "fabric" hangs from her body.  A "dress" has been tied across her front shoulders.  All this coupled with the expression on her face will have you bursting out in laughter.

In book two one of my many favorite illustrations spans two pages.  The background is hues of blue and teal.  On the walls of Penny's bedroom constellations glow, spinning from a lamp she has in front of her on her bed.  Everything glows in these shades with sparkling stars.  Penny is sitting cross-legged on her bed pointing to the ceiling.  She is wearing lavender pajamas with paw prints on them.  Across from her Jelly is looking at the ceiling.  A couple of stars glow on her fur.


These two books, Penny & Jelly: The School Show and Penny & Jelly: Slumber Under the Stars written by Maria Gianferrari with illustrations by Thyra Heder are uplifting and utterly charming.  They clearly provide readers with the benefits of having a true friend; someone who will listen to you, offer suggestions and be the inspiration you need to solve problems.  I highly recommend both these books for your professional and personal bookshelves.  Dog lovers will read them over and over again.  Anyone who values friendship will love them too.  Laughter is guaranteed.

To learn more about Maria Gianferrari and Thyra Heder and their other work please follow the links attached to their names to access their websites.  There is a website dedicated to Penny & Jelly and their books.  You can access a Penny & Jelly Talent Show Kit here.  In 2015 the first title was highlighted at Scholastic's Ambassador of School Libraries, John Schumacher's blog Watch. Connect. Read. with a chat between John and Maria.  Maria was also showcased at KidLit 411, at The Little Crooked Cottage (actually Jelly was interviewed) and on author Tara Lazar's blog, Writing For Kids (While Raising Them) in that year.  Thyra Heder was featured at Miss Marple's Musings in the summer of 2016 with process art and an interview.  Maria and the second book were highlighted at Writing For Kids (While Raising Them), Picture Book Builders and at author Cynthia Leitich Smith's Cynsations.
Posted by Xena's Mom at 8:58 PM