The existence of cities and civilizations beyond our knowledge is intriguing.  They may have flourished centuries ago leaving behind only fragments of their presence yet to be discovered.  To believe there is a corner on our planet with people, animals and plants thriving today untouched by anyone other than themselves is thrilling.  Hopefully in the future there will be societies more wonderful than we can imagine not only here but on other planets in other solar systems in other galaxies. 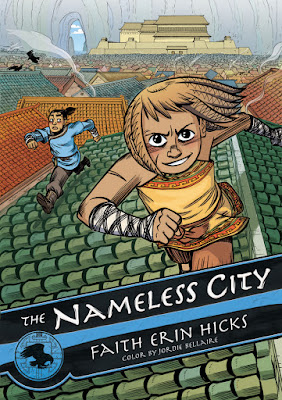 To allow our minds to wonder about these possibilities creates stories which fascinate us with every word we hear or read.  Last year graphic novelist Faith Erin Hicks released such a tale into the children's literature realm.  The Nameless City (First Second, April 5, 2016) is a remarkable place filled with The Named.  These people, the city's people, remain neutral as it is conquered over and over throughout generations.

Strategically located at the base of a mountain range, it contains a passage carved through the mountains so the River of Lives can flow into the sea.  For thirty years the Dao have held the city but the Yisun and the Liao are waiting for an opportunity to take it back.  As this book begins a group of Dao children have been sent to the city from their homeland to begin training as soldiers.

Twenty-five year old Erzi, the first Dao born in the city, is the son of the current ruler, The General Of All Blades.  He and his highly skilled body guard, a woman of The Nameless City, called Mura are instructing the group.  In the midst of this one of the main protagonists, Kaidu, meets his father, Andren, for the first time. As their relationship develops we come to understand why they are meeting after so many years and the role of Andren in the city's politics.

On his first adventure into the city alone, against palace policy, Kaidu meets one of The Named who calls herself Rat.  She is understandably not happy with a Dao.  He simply wants to find his way back to the palace.  After a theft and an impromptu race, a bargain is made; food in exchange for learning how to navigate the city on the rooftops.

Over the course of more than thirty days as their mutual respect and trust grows, so too does our knowledge of the monks home called The Stone Heart, a place of refuge and keeping of the city's history, the power struggle at the palace between the ruler, his son and Kaidu's father and of the Northern People, original occupants and builders of the city.  A secret meeting observed and a gift (two seemingly unrelated incidents) result in heart pounding life or death actions bringing readers breathlessly to the conclusion of this first title. 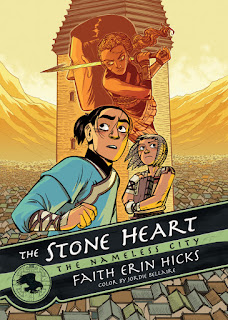 The Stone Heart (The Nameless City 2) (First Second, April 4, 2017) written and illustrated by Faith Erin Hicks with color again by Jordie Bellaire begins three months after the electrifying conclusion of The Nameless City.  Rat has been spending time at the palace healing.  Tension between Erzi and his father, The General Of All Blades is intensifying.  Andren's plan for a council of all those concerned with the city is accepted by The General Of All Blades but not his son.

We understand something is amiss between Mura and Jonah, a former soldier now turned monk at The Stone Heart.  Rat reveals to Kaidu the monks harbor secrets forgetting he is Dao.  Two of Rat's friends are introduced to Kaidu, one grudgingly accepting his presence.  Two more key pieces in the ever-growing puzzle are supplied to readers; the death of Rat's parents and the saving of Mura by Erzi.  Every page turn sizzles with revelations as the pressure mounts.

A shocking betrayal will leave you stunned.  The status quo no longer exists.  New enemies and unexpected allies emerge.  Decisions with horrifying results are made to lessen the loss of life.

Adversaries within the city and outside the city are devising strategies.  That which has been stolen must be stolen again.  An escape under the cover of darkness holds promise but...what does the final panel mean?  Is a dark, bitter soul about to radiate pure evil?  (Talk about a cliffhanger...)


It is abundantly clear the heart of this trilogy as seen in the first two titles is the growing (unlikely) friendship and affection between Kaidu, a son of a Dao general and diplomat, and one of The Named, Rat.  As an author Faith Erin Hicks fashions this relationship in light of other bonds, Jonah and Rat, Kaidu and Andren, his father, The General Of All Blades and Erzi, and Erzi and Mura.  Expertly woven into the narrative, especially in the second book, are explanatory portions of the past.  The world Faith has built inspired by thirteenth-century China asks readers to think deeply about the conquered and their conquerors.

Told entirely through a skillful blend of dialogue and wordless images, the story captivates you through the universality of young people trying to make sense of the past, striving toward a better future while realizing their full potential.  The playful humor, the harbored feelings of wrongs committed, the emotional turmoil between parents and children and the strain of a city and country unraveling are displayed in Faith's use of words and language.  Here are some sample passages from book one and book two.

I guessed you'd go back there, and I was lucky: you did.
That's not fair! You can't beat me with luck!
Yeah, well, it happened.  Goodbye.
Race me again.
What? NO.
You have to!  No one is faster than me.
You're just going to have to live with one person being faster.
I'll take you back to the Dao palace.
Fine.  You take me home and I'll race you again.
YESSS.
C'mon, let's race.
Nope, done enough for today.  Race later.  Tomorrow, I guess.
Ugh, fine!  Tomorrow we race.
Just so you know, the palace is this way.
URGH!
What's your name?
Rat.
HaHa, I thought you said your name was Rat---
I did.
Um...okay.
Do you want to know my name?
No.
Why not?
I don't want to know any Dao's name. (Kaidu and Rat)


The city is a part of me, in a way that it isn't a part of you.
I was born here!  I grew up here!  I am the city's rightful heir.
You can't take that away from me because...because you feel sorry for a child!
A child who saved your life.
I will fight this plan for a council of nations.  I have supporters within the military.
I will not stand aside while you throw the empire away.
Then I will send you back to the Dao homelands.
Wh---What?
I am the General Of All Blades.  I have decided on a path for the Dao in The Nameless City.  You will stand with me, or I will send you back to the homelands.
I've never even seen the Dao homelands.
You would send me away from everything I've ever known? (Erzi and his father)


The magnificent front of the book cases, on the hardcover and paperback copies, has raised portions of text and line work.  Each of the images is full of action nearly ready to leap from paper to reality.  From Rat and Kaidu running along the tiled roofs to Mura's warrior stance within Erzi's silhouette readers know they are in for nonstop adventure in this fantastic world.  On the opening and closing endpapers Faith Erin Hicks has drawn a map of The Nameless City and the outlying areas.

The intricate details in every single panel will have you pausing and going back to look at each one again.  The panoramic views are breathtaking and the close-ups bring you intimately into the moment.  The action sequences, of which there are many, are elaborately executed.  There will be times when you no longer feel like you are holding a book.  Instead you will believe you are watching a movie.

Some of my favorite illustrations are when Rat and Kaidu are running along the rooftops in the city.  Their feats display amazing agility.  When they leap across the river, rooftop to rooftop, you have to remind yourself to breathe.


If you have not read The Nameless City written by Faith Erin Hicks with color by Jordie Bellaire, remedy that immediately.  Then on April 4, 2017 run, don't walk, to your nearest independent bookstore to get a copy of The Stone Heart.  If they don't have it, stop by your public library to put in a request for them to purchase it or place a hold on a copy.  I read both these books twice yesterday.  You better believe when the final book in the trilogy, The Divided Earth, is released, I will get it as soon as possible.

To learn more about Faith Erin Hicks and her other work please follow the link attached to her name to access her website.  Faith also maintains a Tumblr account.  To view panels from book one and book two please visit the publisher's website.  The publishers have created a guide, Understanding and Exploring the Middle-Grade Graphic Novel.  Faith Erin Hicks is interviewed at Geek Mom, Comic Book Resources,  Chicago Review of Books and the Los Angeles Times.  Faith Erin Hicks is a guest on All The Wonders, Let's Get Busy: Episode 246 with teacher librarian Matthew C. Winner.
Posted by Xena's Mom at 1:53 AM