Educators have plans for a day, a week, a month and an entire year with goals to be met.  Even if not required, their value is priceless.  When you hold the future captive in your classroom day after day, year after year, it's a responsibility and an honor for you to be your best self and to help them find their best selves.  There are those days though, when plans take wing and fly out the window in the face of another form of learning. 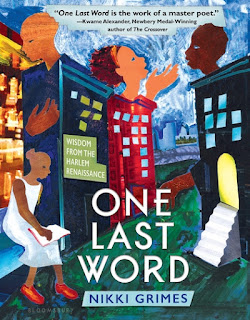 In looking back you may or may not be able to pinpoint the moment, word or action which prompts the shift but the entire room feels it.  At the end of this special kind of day when everyone leaves, they are feeling more connected to you, themselves and humanity as a whole.  One Last Word: Wisdom From The Harlem Renaissance (Bloomsbury, January 3, 2017) written by Nikki Grimes with illustrations by Cozbi A. Cabrera, R. Gregory Christie, Pat Cummings, Jan Spivey Gilchrist, Ebony Glenn, Nikki Grimes, E. B. Lewis, Frank Morrison, Christopher Myers, Brian Pinkney, Sean Qualls, James Ransome, Javaka Steptoe, Shadra Strickland and Elizabeth Zunon is exactly like one of those extraordinary days.  Nothing else matters but the poems which lift your soul, making you a part of a greater more beautiful whole.

I was thirteen years old when I read my poetry aloud in front of an audience for the first time.  The event took place at the Countee Cullen Library in New York City, a local branch named after one of the leading poets of the Harlem Renaissance.  ...

... As I ascended the stage that day, I felt as if I were stepping into the stream of the Renaissance poets who had come before me.  I feel their weight, and their influence, still. ...

The Harlem Renaissance was one of the most remarkable periods of artistic growth and exploration in American history. ...

... Through the decades, this literature has reminded readers, of all races, how vital it is that we define ourselves, set our own paths, celebrate our own capabilities, and determine our own destiny, no matter what obstacles are placed in our way. ...

The above four short passages are taken from the Preface and an introduction titled The Harlem Renaissance written by Nikki Grimes.  They are a genuine, moving invitation, a musical interlude of words, to the three parts of this title, Emergency Measures, Calling Dreams and To A Dark Girl, which contain thirty poems (one is an excerpt).  Using the poetic form called The Golden Shovel, Nikki Grimes writes sixteen poems in response to fourteen poems written by marvelous poets from The Harlem Renaissance.  The Golden Shovel asks the writer to take a line or an entire poem using the words at the end of a line in a new poem.

Thunder blossoms gorgeously above our heads.

The truth is, every day we rise is like thunder---
a clap of surprise.  Could be echoes of trouble, or blossoms
of blessing. ...

Following a poem speaking about life and death of a particular person, we are introduced to the inner thoughts of six young people looking for the best life has to offer.  We sense a deep compassion for their hopes, fears and challenges.  This is followed by thoughts on dreams as a lead to the second section.

Three odes to three girls send our hearts soaring as the wonder of each one of them is declared. A boy wants to take a girl to the prom; a frank dinner table discussion reveals truths and trust.  Another individual marvels in silence at the beauty of another wishing for courage, maybe tomorrow, to speak.  Closing as Nikki Grimes begins; a quest continues with hope.


These poems, from The Harlem Renaissance and written by Nikki Grimes, will set your soul on fire warming you through and through.  You want to jump inside the poetic answers penned by Nikki Grimes, believing the potency in each one will sustain you regardless of the path you choose.  You understand what you are reading is pure truth.  Every time you read a single line, you recognize she is a wizard with words, casting a spell over every reader.  Here are some more examples.  (I actually wanted to underline nearly everything in this book.)

HELENA
I've never met a marine biologist, so
what makes me think I could be one?  My head is full
of fantasies that don't fit other people's ideas of
what's possible.  They tell me I should squeeze my hopes
into a miniature box of their design.  But I'm not so
inclined.  Their infinitesimal perceptions are not for me.  I'm full
as a pinata, stuffed with daring and delectable dreams of
all I can truly be.  There's hardly room for doubts, for fears.

From Lessons by Nikki Grimes
... Empty pockets turn you inside out, but
Son, don't mind what's missing.  Count all
that's free:  friendship, laughter, all the
love your heart can carry, and time---count time.

Not including the matching dust jacket and book case, there are sixteen original stunning illustrations by the illustrators listed above.  Each is uniquely their own work showcasing their own special styles and color palettes.  I know you will find yourself doing the same thing I did; trying to guess which picture was created by which artist.

One of my many favorite images is created by Pat Cummings for Nikki Grime's poem David's Old Soul.  The poem makes reference to a son being like a tree on which his two brothers may lean and carrying them and his mother like a raft over the rough waters of life.  A pale golden yellow is the background.  Pyramids are seen in the distance on the left and right.  Palm trees and their branches extend from the edges.  A strong young boy, his upper body shown, fills much of this top half of the page.  He is holding out a protective arm toward one brother.  The other brother is in the arms of their mother, her hair streaming in the water.  This water is shown in shades of green and blue on the lower half of the page.  This is a striking representation.


This collection of poems by Nikki Grimes in reply and tribute to poets from The Harlem Renaissance with illustrations by Cozbi A. Cabrera, R. Gregory Christie, Pat Cummings, Jan Spivey Gilchrist, Ebony Glenn, Nikki Grimes, E. B. Lewis, Frank Morrison, Christopher Myers, Brian Pinkney, Sean Qualls, James Ransome, Javaka Steptoe, Shadra Strickland and Elizabeth Zunon is without a doubt one of my favorite books of poetry...ever.  You can read it in one sitting like I did or a few poems at a time.  You can read them over and over and the "magic" will be there every time.  This book is a must read and a must own.

To learn more about Nikki Grimes and these individual illustrators please follow the links attached to their names to access their websites or information about them.  At the publisher's website you can view and download a teacher's guide.  On February 23, 2017 Publishers Weekly hosted a chat between poets Kwame Alexander and Nikki Grimes.  On February 6, 2017 The Horn Book asks Five questions for Nikki Grimes. On February 3, 2017 School Library Journal features A Renaissance Woman | Up Close with Nikki Grimes.