If you call out to a group of children asking them who wants to play a game, you will get a unanimous chorus of me.  If you tell them they need to search for clues to solve a mystery, the excitement grows.  Guys and gals love to laugh.  They are perfectly wired to sense the humor in almost any situation; the sillier the better.  They also become attached to characters in books they enjoy.  They will reread these books over and over because they don't want to leave those fictional individuals. 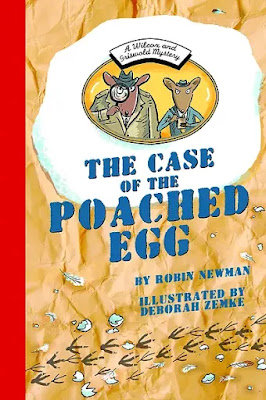 Boys and girls, this case is about a poached egg on Ed's farm.
Over 100 animals live on this farm.  Most work.  Some horse around.  Others steal.

Policemice Wilcox and Griswold know something is about to happen even before they get a call early in the morning on Tuesday.  Farmer Ed's Big Speggtacular is going to be held on Wednesday.  The competition is fierce among the fowl friends.

Henrietta Hen is frantic.  Her precious Penny has disappeared.  Is Penny her mother, sister or daughter?  No, she is not.  Penny is an egg, a very fine egg.

When the Missing Food Investigators arrive at the coop, feathers are frantically flying.  Henrietta Hen first shows them a ransom note with unfamiliar handwriting.  No one has been near the coop except for Gabby Goose and Colonel Peck.  Colonel Peck is far from helpful during his questioning preferring to focus on his lack of corn kernels.  So far the evidence, egg shell samples, feathers and prints, reveal nothing unusual.

Detective Wilcox has an epiphany while eating a cheese donut when they are stopped at the Milky Way for cows to cross.  There's something odd about the letter e in the note.  Interviews with Gabby Goose, Miss Rabbit and Porcini the Pig leave the duo more puzzled than ever.  There is no time to lose.  What if the egg happens to hatch?

Will Farmer Ed's Big Speggtacular disclose more than a winner?  Will the egg burglar blunder?  Let's hope the conclusion leads to cracking the case and not precious Penny.

With every reading the language written by Robin Newman gets richer and richer with one comedic comment, thought or sentence after another.  Her command of word play will have you laughing out loud at the same time you wonder in amazement how she manages to create combination after combination of words with more than one meaning.  The references to chickens, other fowl and farm life are astonishing.

The blend of dialogue, spoken and silent accounts by Detective Wilcox and the lack of speech but knowing looks by Captain Griswold make for an eggs-cellent contrast.  The use of time of day and place at the beginning of each chapter add to the law enforcement atmosphere.  Detective Wilcox usually manages to close chapters with astute observations.

"If we don't find Penny fast, I whispered to the captain, "she might end up in an omelet.  Or worse, in a bucket of fried chicken!"
We had to scramble on this case.  Scramble before we had scrambled eggs indeed.

Knock. Knock. "MFIs," I hollered.
"Door's open.  Come on down," shouted Miss Rabbit.
We slid down the rabbit hole and landed in the kitchen.
"Detectives, how nice of you to drop in," said Miss Rabbit.  "Would you like some carrot cake?"

Illustrator Deborah Zemke has a keen eye for making the book case look like a well-used file folder or pages from a case file.  Placing the A Wilcox and Griswold Mystery logo inside a poached egg is sheer design genius.  The cracked egg shells and fowl prints carry across the opening endpapers which includes the verso and title pages.  Every detail references to policemice work.

On the two introductory pages a map of Ed's Farm is placed over MFI photographs of Captain Griswold and Detective Wilcox.  With every page turn small images on placed within the text, reflecting the narrative.  Each chapter begins with an oval image at the top.  To emphasize a moment the illustration might cover a half of the page or be spread across the bottom of two pages.

The eyes on the chickens, the body posture and facial expressions on all the characters, and their clothing add to the humor.  It's particularly funny that the MFIs are much smaller than most of the animals on the farm.  Readers will find themselves chuckling at some of the details; Colonel Peck's oversized comb, the names of the chickens written on their boxes, and Gabby's pouch for carrying her egg, Gertie.

One of my favorite illustrations of many is at the beginning.  There is something about Detective Wilcox's and Captain Griswold's car being a wind-up toy which I find hilarious.  In the lower half of the page they are leaving MFI Headquarters which happens to be a Sneaker Squeakers box.  As Griswold opens the driver's side of the car, Wilcox is turning the key to get the car moving.  Their hats and coats are totally in keeping with the old style vision of law enforcement attire.

Sleuths are going to get caught up in this farmyard whodunit trying to piece the clues together.  The Case Of The Poached Egg (A Wilcox and Griswold Mystery) written by Robin Newman with illustrations by Deborah Zemke is bursting with the imaginative use of words.  I don't think you will ever look at an egg the same way again.  Early readers are going to savor every page.

To learn more about Robin Newman and Deborah Zemke and their other work please visit their websites by following the links attached to their names.  At the publisher's website you can download a curriculum guide for this title. Robin Newman was a Featured Member at KidLit TV.  Enjoy the book trailer.