Seeking Across The Seas

Have you ever wondered what it would be like to be the first human to set foot on a particular place on this planet?  Time and time again when out walking in the woods, climbing a mountain or strolling along a lake shore, I have found myself speculating on how something still beautiful today was thousands and thousands of years ago.  Were the plant and animal populations more varied and plentiful?  Was this particular place higher, lower or even under water?  Did the first person come alone or were there many together?  Recorded human history and the work of scientists in many fields can answer some of these questions. 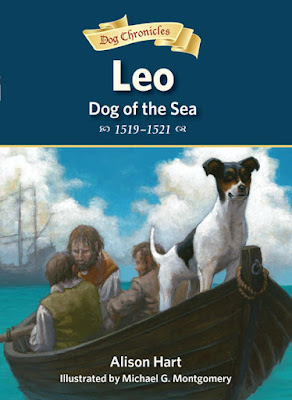 By definition an explorer is one who travels in search of geographical or scientific information. (Merriam-Webster)  Almost five hundred years ago a Portuguese explorer left the shores of Spain in 1519.  He had the support of the then King of Spain, Charles I.  His task was to find a western route to the Spice Islands.  His name was Ferdinand Magellan.  Leo Dog of the Sea 1519-1521 (Peachtree Publishers, April 1, 2017) written by Alison Hart with illustrations by Michael G. Montgomery is a story of that voyage narrated by one of its passengers.

Sanlucar de Barrameda, Spain
August 1519
Rato! a gruff voice hollers as a toe nudges my ribs.  Steward points to the dark corner.  A furry ball, its naked tail twitching, scurries along the ship's wall.  A chunk of bread is clamped in its mouth.

A dog of unknown origins and breed is making his home aboard a ship called the Trinidad as their resident ratter.  It is his fourth sea journey.  As he wanders around the ship, being prepared to set sail, we are introduced to the Steward, Hernando the barber, various crew members performing specific tasks, Diego, Dias, Vasco, Pigafetta, a writer documenting the trip and a homeless child hiding in the dog's secret nest below deck.  Before the cry to raise the anchor is given Captain General Ferdinand Magellan, his slave Enrique, and Gonzalo Gomez de Espinosa, master-at-arms survey the crew.  Four other ships will sail with them, the San Antonio, Concepcion, Victoria and Santiago.

The start of the trip is plagued with suffering from months of constant storms; sharks follow hoping someone will fall overboard.  A captured shark for food, another sudden storm, Marco, the stowaway saved by Leo, the dog, twice and St. Elmo's fire provide nonstop action.  A calm, windless days, follow those storms, but the men are anything but untroubled. Mutiny! It's averted but tensions are rising.

Reluctantly leaving the warmer weather in Brazil, the voyage turns south along the coast of South America as the search for a break in the land continues.  There must be a way through the continent rather than the turbulent voyage around the tip.  Magellan is determined to make this discovery at all costs.  Rationing begins again, ships are battered, and the Santiago is lost at sea.  What of those men?  A severe lesson is taught so others will not even think of mutiny.

There is joy and dread at same time upon making it through the land to see the Pacific Ocean (which Magellan names); the first Europeans believed to have completed this discovery.  This is a huge unknown with no knowledge of how long it will take to find the Spice Islands.  Surviving storms in already weakened vessels is an issue.  Food and water supplies are diminishing.  Members of the crew are wasting away with an unknown sickness; high numbers are being buried at sea.

Down to three ships readers along with crew members are wondering how residents native to the islands, if they reach them, will receive them.  They are also starting to consider how their Captain will approach the island occupants.  The events move quickly to several horrific decisions; too many lives are lost.  Will the remaining ships and crew ever see home and Spain again?  Pigafetta, Marco and Leo the Brave, a tried-and-true trio of friends, will guide readers through arduous events.


Accurate details woven into the narrative reveal the time-consuming and meticulous research conducted by author Alison Hart.  We not only learn about incidents relative to this voyage but also about life at sea in general.  Dialogue further introduces us to the personalities of the crew members adding realism and increasing the tension; both moving the story forward completely captivating readers.  Told from the dog's point of view adds sensory elements making the experience far richer.  The entire book is designed like a journal with chapters titled by place names and dates.  Here are several passages.

"How long is the journey, do you think? Dias asks.
"Who knows? Magellan has ordered provisions for a long year." Diego smiles mysteriously as he leans forward.  "For truth, I have heard whispers that this voyage is guaranteed to be like no other."
Excited murmurs travel from sailor to sailor.  I prick up my ears.
For a moment I forget about my empty belly.  The air seems to tingle.  My whiskers vibrate.
Jumping from the shadows, I place my paws on the railing.  The bowsprit points like an arrow toward the horizon.  Waves crash against the bow below me.
Above me in the foremast, I hear sailors call to each other.
The strong wind flaps my ears.  I stare out at the vast, churning sea---and wonder at the adventures ahead.

A chunk of goose falls by Faleiro's feet and I quickly snap it up.
Suddenly Espinosa sees me.  His eyes grow dark, as if I am some enemy.  "Dirty dog!" Seizing me by the scruff of the neck, he holds me up.  "You dare to steal our guests' food?"
I snarl and squirm, but I cannot get away.
Pigafetta stops writing.  "Please forgive Leo's intrusion," he tells Espinosa in his calm voice.  "He is a curious dog."
"Leo!  The ratter has a name?" Espinosa scoffs.  I bare my teeth at him and he laughs.  "Perhaps his name should be called Shark Food.  I will toss him into the sea once and for all."
The water of Port Saint Julian is so cold that at least I will die instantly.


The front cover of the dust jacket (I am working with an ARC.) skillfully depicts a frequent position of Leo as the crew sets forth with every landing.  It was rendered in oil on canvas board.  Throughout the book illustrator Michael G. Montgomery has drawn an image for each chapter. These pencil illustrations are intricately detailed.

Each pictures depicts a particularly important happening.  We see Leo saving Marco from falling overboard during a storm, the ship sailing out into the Pacific Ocean for the first time and Pigafetta crying for help after falling overboard.  Montgomery takes us back in time.

One of my favorite illustrations is during one of the horrendous storms.  Marco is clinging to a beam as the ship lists.  He is holding Leo with his other arm after the dog just saved his life.  You can feel the rain pelting their skin and fur as the wind howls and the waves tip the ship.  You know the boy and the dog could slide into the raging sea at any moment.


For top-notch historical fiction Leo Dog of the Sea 1519-1521 written by Alison Hart with illustrations by Michael G. Montgomery is an excellent choice.  There is extensive back matter at the conclusion of the book.  Alison Hart talks about what happened to the expedition after the book finishes, about the character Leo, the officers and crew, hardships of the voyage, conditions of the ships, mutinies, the unknown, and discovering new cultures.  She includes a bibliography of sources and books for further reading.

To discover more about Alison Hart and Michael G. Montgomery and their other work (this is their fourth collaboration in the Dog Chronicles) please visit their websites by following the links attached to their names.  At the publisher's website you can read an excerpt, use a teacher's guide and view a Q & A with the author.