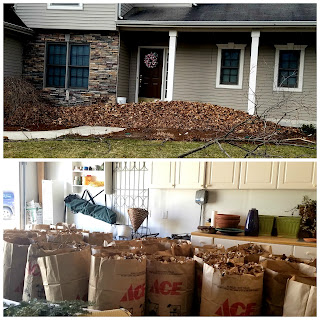 In our area of Michigan last Wednesday we had high winds which caused power outages for many hours and for some, days.  The wind decided to leave her best handiwork in front of my home rather than any other house in the neighborhood.  The pile was more than three feet deep at some points.  Like others with less leaves, I could have left them for another wind to play with but on Saturday after four hours of work, thirty-two bags were filled with leaves and are now stored in my garage until pickup begins in April. 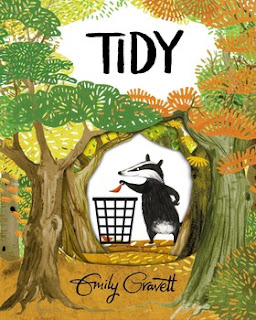 It's not that I am super-neat.  Okay, maybe I am but I am a librarian and there was no access to my front door.  When I read the newest title by Emily Gravett, Tidy (Simon & Schuster Books for Young Readers, March 21, 2017), there was an instant kinship with the main character.  Although, with that being said, he does take neat-as-a-pin to a whole new level.

Deep in the forest lived a badger named Pete, who tidied and cleaned and kept everything neat.

The wildflowers looked like a highly skilled horticulturist performed daily work in their midst.  The fox looked like he was ready to compete in the Westminster Kennel Club Dog Show.  The birds looked stunningly fastidious with nary a feather fluffed.  There was a place for everything and he put everything in its place.

When autumn appeared a single leaf fell into all this tidiness Pete had perfected.  Before long more leaves than could be counted drifted down to the forest floor.  Of course he had to pick up every single one.  He literally had mountains of bags.  Now, there was another problem.

What would he do with all those bare looking trees?  Oh, no!  He dug them all up!  The more he tried to clean, the worse it was for the forest until he realized there is such a thing as too much perfection.

Emily Gravett has been charming readers with her stories such as The Rabbit Problem, Wolf Won't Bite and Again! since 2005 when her first book, Wolves, won the Kate Greenway Medal.  (She won it again in 2008 for Little Mouse's Big Book of Fears.)  In this title sentences are structured to contain two rhyming phrases or two sentences are grouped with the final word rhyming which make this a read aloud treat.  To create a pause in the narrative, punctuation works to introduce a variance as does a single individual sentence.

The story is told by an unseen narrator in an easy, conversational style providing a warm and inviting atmosphere.  This allows readers to speculate and form their own opinions as Pete pursues his perfection.  Here is a sample passage.

He picked up stray sticks,
he swept and he rubbed.
He polished the rocks,
and he scoured and he scrubbed.

The dust jacket, book case and opening endpapers (I have an F & G.) have an enormous WOW factor.  The opened dust jacket spans scalloped end flap to scalloped end flap.  The scallops edge around forest bushes, shrubs and trees.  It is a scene in Pete's forest.  The fox is looking up at the closing end flap information.  A magpie sits on top of the opening flap introduction.  On the left side tacked on a tree is a poster with Pete shelving a book which reads

The Tidy is placed on this book.  Near the tree is a rabbit and hedgehog.  The ISBN is held in place by the spikes on the hedgehog.  Beneath the title text on the right side is a die-cut opening which shows Pete placing a single leaf in a trash bin.  On the reverse of the dust jacket is another forest scene with Pete carrying a mop.  In the distance is his digger.

On the book case we are privy to another forest setting.  An owl sits in a cleaning bucket as a crow sitting on a branch dumps cleaning soap from a bottle.  A cleaning brush is sticking out of a hole in a tree trunk.  There is a die-cut in the book case front also revealing Pete.  The opening endpapers indicate it's autumn in the woods.  On the right is the final die-cut.  It's spring with pink blossoms on the tree branches on the closing endpapers and for once, no cleaning utensils are visible.  On the title page a rabbit watches Pete.  A rubber glove hangs from a tree and a bottle of soap is next to the same tree.

Rendered in pencil, watercolor and wax crayons each image is full of delightful details; Pete using a hedgehog to comb the fox's fur, birds carrying toothbrushes so Pete can scrub their beaks, a vacuum cleaner with eyes to sweep the forest floor, Pete's umbrella with a duck handle, the rooms underground in Pete's home and the numbered tags on the trees Pete returns.  (You are going to love the final two pages containing the publication information.) Many of the illustrations are spread across two pages in vibrant full color.  When Pete begins to go overboard on his neatness, those colors shift to darker more limited colors of browns, black and grays.  Emily's animals' expressions and actions are adorable; even the ants get in on the action.

One of my many, many favorite illustrations is one of two on a single page.  Pete is wearing a flowered full-length apron.  Next to him is a soap bottle with a tiny blue bird on the label.  He is using a large sea sponge to scrub an owl sitting in a soapy bird bath.  The bird bath basin is held in place by two sculptured badgers.  Another small bird is leaning over the edge holding a tube of tooth paste ready to squeeze some on the next brush and bird in line.  This is just one example of the humor in this book.

This book, Tidy written and illustrated by Emily Gravett (it was released in Great Britain in April 2016) is a must read.  It needs to be on every personal and professional bookshelf.  The narrative, illustrations and book design are heartwarming, timely and timeless.  I know you will want to use it in April for Earth Day but it will be requested to be read any time of the year.  I love this book and so does the Kate Greenaway Medal committee.  It is on their longlist. (And I just read a tweet which says it made the shortlist announced today.)

To learn more about Emily Gravett and her other work, please follow the link attached to her name to access her website.  This website also contains many activities to be used with her books.  At the publisher's website are seven images to view, including the cover.  At The Guardian Children's Books there is a wonderful step-by-step article on how to draw a badger. At Teaching Ideas, a UK website, there are many story stretcher thoughts related to this title.  There is an older series of video interviews with Emily at Reading Rockets.
Posted by Xena's Mom at 11:57 PM