Can you hear that sound?  It's the music of shared laughter.  This happens when readers get to enjoy the company of their favorite characters over and over.  When those characters maintain the personalities we've previously appreciated, it makes the hilarity far richer.

Another marvelous transformation takes place with the readers and listeners.  When they leave the story walking out into the real world, a bear is no longer just a bear.  It may be Winnie the Pooh.  A spider is simply not a spider, it could be Charlotte.  Our view of the world is changed forever. 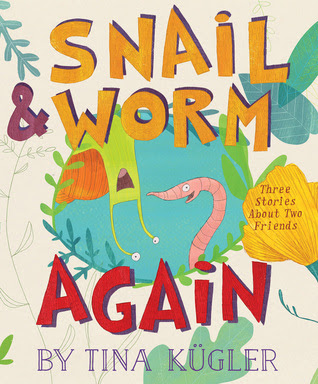 Last year readers met two creeping, crawling companions whose brand of comedy will always have us giggling repeatedly.  Snail & Worm: Three Stories About Two Friends won the Cybil Award for best Easy Reader.  This lovable duo is back in Snail & Worm Again: Three Stories About Two Friends (Houghton Mifflin Harcourt, March 28, 2017) written and illustrated by Tina Kugler.  Neither will a snail nor a worm ever be anything but Snail and Worm.  If you see one, you will be looking for the other.  And you will be listening very carefully for their next outrageous and heartwarming chat.

A sleeping Snail wakes when a feather falls on Snail's shell.  When Snail tells Worm the wings will be used to fly away, Worm is understandably sad.  At first Snail thinks Worm doesn't like the wings but Worm explains.

A silent sorrow descends on the two pals.  Then a stiff breeze blows the wings (feather) away.  Wise words are uttered by both Snail and Worm.

During their next conversation Snail finds a penny thinking it is a mirror.  The penny is facing out showing the portrait of President Abraham Lincoln.  In kindly but truthful queries and observations, Worm points out the differences between Snail's actual physical traits and those of the former president.  Readers will be shocked not once but twice as the ending depicts silliness and sensitivity at the same time.

In their third meeting Snail is suffering from an identity crisis.  Comparisons with a beetle, rock and flower leave Snail feeling dissatisfied.  As a true friend Worm steps in voicing a glass-half-full attitude.  While Worm and readers feel the relief of a personal disaster being averted, Snail's final remark is sure to trigger guffaws and groans.


The three stories are told entirely in dialogue using short, lively sentences uttered by Snail and Worm. What Tina Kugler does with her words is to leave pauses for her characters' and readers' thoughts and for her images to broaden and deepen the amiable discussions.  It's the final line in each story which reveals the extent of her skill when we are unexpectedly touched by tenderness or absolute folly.  Here is a sample passage.


If we were to look at the world from the perspective of a worm or of a snail, the plants, the flowers and leaves, would appear as Tina Kugler has placed them on the large illustration covering the matching dust jacket and book case.  Her blend of full color and line drawings creates a whimsical atmosphere perfect for her two characters.  The smiling faces on Snail and Worm welcome readers and advise us of the joy to follow.  Having Snail hanging upside down is superb.

A warm, golden orange-yellow covers the opening and closing endpapers.  Etched on these in white are ferns, leaves and stems.  A nearly identical picture of the duo as seen on the front of the jacket and case appears on the title page with wildflowers in the two lower corners.  Flowers, leaves, ferns and stems are placed on all the pages reminding us of the habitat of these two buddies.

Snail's eyes on the antenna with his curved mouth and Worm's longish nose and quirky mouth portray a full range of emotions.  It's amazing how much can be done with the placement of a dot in an eye.  Tina alters her picture's sizes depending on the point in the narrative.  Most of them are loosely framed or extend page edge to page edge.  She sometimes places Snail and Worm in their own small portrait-like shapes.  In this title her two-page wordless visual is very profound.

One of my favorite illustrations of many is a close-up of Snail and the "mirror".  The Lincoln penny is resting against a leafy stem as Snail's antenna arch up and gaze at it.  Snail is ridiculously happy.  Tina has placed a single leaf in the lower, right-hand corner as if to hold the picture in place.


The intended audience, actually anyone who wants to add joy into their day, will take great pleasure in Snail & Worm Again: Three Stories About Two Friends written and illustrated by Tina Kugler.  These short but sometimes tender and other times deliriously funny tales are worthy of repeated readings.  In fact when read aloud today as soon as the book was finished a voice rang out, "Will you read it again?"  "Right now?" I asked.  "Yes, right now."

To discover more about Tina Kugler and her other work please visit her website by following the link attached to her name.  Snail and Worm have their own website.  Tina is interviewed at KidLit Artists on June 20, 2016.  Enjoy some of the tweets about this book.

Did you know? SNAIL & WORM AGAIN comes out May 2017!
Here's a peek of an existential crisis experienced within: pic.twitter.com/zXbOd309Me
— tina kügler (@tinatheatre) May 6, 2016