When it comes to folktales, wolves have generally been portrayed as the bad guys.  It seems they have a huge hunger for little girls in red capes, grandmothers, baby goats and pigs.  They've made appearances in fables and fairy tales throughout time and in cultural variants from countries around the world. 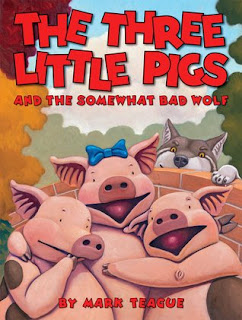 Even when the tales are fractured, the premise is pretty cut and dried.  In The Three Little Pigs and the Somewhat Bad Wolf (Orchard Books, an imprint of Scholastic Inc., April 30, 2013) written and illustrated by Mark Teague, readers are given a fresh view of the pigs and...the wolf.  Let's head on over to the barnyard.

So far so good but lo and behold, out of the blue, the farmer and wife inform the pigs the farm has been sold.  They are moving to Florida so the pigs need to find another place for themselves and their belongings.  The single most important thing to two of the pigs is food.  After all, they are pigs.

The third pig, however, wants to purchase building supplies. For pig number one, it's straw and a truckload of potato chips.  Sticks and an ample supply of sody-pop, are acquired by the second pig.  It's stacks of bricks for our third porcine pal.  She's going to build something that lasts. (Lucky for her the gentleman at the store gives her a sandwich.)

Lapping in the luxury of their snacks and not their ill-constructed abodes, the first two swing in a hammock, lounge in a mud bath or pork out (so to speak) while watching the third pig work at a steady pace.  When completed the brick home is fit for royalty, gardens and all.

Soon, though, you-know-who comes waltzing into town.  No one want to serve him so much as a crumb of food.  As the story goes, one hungry wolf is on the prowl.

When approaching first the house of straw, then the house of sticks, he is astounded when after a series of huffs and puffs, both blow down.  He didn't know he had it in him.  Because they both leave on their respective scooter and bike, he's still one ravenous carnivore.


One of the narrative techniques which sets this telling apart is the folksy tone of the conversation.  The blend of the talk between the characters, the voice of the unseen narrator, and the wolf's thoughts spoken aloud couldn't be better.  Mark Teague's sense of humor shines through in his word choice and the rhythm generated in addressing the activities of the three pigs (and the wolf) separately again and again.

Here is a portion of a single passage:

The wolf moved on, hungry but confident.  He came to another house, this one built of sticks.
"Same piggy smell, " he said.  He knocked on the door.
"Who is it?" called the second pig.
"Wolf. Open up, or I'll blow your house down! Trust me," he added, "I've done it before."


There is something about the pigs Mark Teague paints that brings on smiles to all who see them; those robust figures, knowing eyes, big snouts and laughing mouths.  The matching jacket and front cover give no hint as to the ending; quite the opposite.  The back jacket and cover show the trio in front of the barn and silo dribbling a soccer ball.  Patterned across the pale yellow opening and closing endpapers are pig one and two munching and drinking their favorite treats in easy chairs, while pig three is pushing her wheelbarrow.  The wolf, mama duck and ducklings, hen and cat are part of the crew. The bright, bold color palette seen on the cover is continued throughout the title on all the two-page spreads.

Using oils Teague's detail and texture bring the illustrations fully to life; animated features and body postures conveying the mood of each character set among less than normal circumstances.  It's not everyday you see a pig reading in a chair next to a cloth-covered table with a lamp and framed picture on top in the same pig pen with two others wallowing in mud.  There's also a basketball hoop hanging on the wall at pig-high level next to the mud hole.  It's the mix of a human lifestyle with these three pigs that will have readers' sides shaking with laughter.


Written and illustrated with oil paintings by Mark Teague, The Three Little Pigs and the Somewhat Bad Wolf is a must add to your fractured fairy tale collection.  I've said it before, and I will say it again...any title which makes readers laugh while introducing them to folktales, is the best kind of picture book.  This is certainly a good book to share one on one but aloud, with voices, it's a storytime winner.

I will be adding this title to my Little Pig Variants popplet.  Here is a link to various activities at the Scholastic website.  Follow this link to a series of video interviews of Mark Teague at Reading Rockets.

JoEllen McCarthy has my sincerest thanks for gifting me a copy of this book.  We follow each other on Twitter.  Her handle is @imalwayslearnin
Posted by Xena's Mom at 10:51 PM