One of the best things about the advent of spring until the first chill days of autumn is the sound of birdsong beginning every morning.  Even as I write this post I can hear the cheerful tune of one of the male cardinals taking up residence around my yard this year.  Our lack of regular rain has been hard on our feathered friends. I find myself filling up the birdbaths twice a day.  They flock and fluff their feathers in the sprinkler stream when I'm watering my gardens. 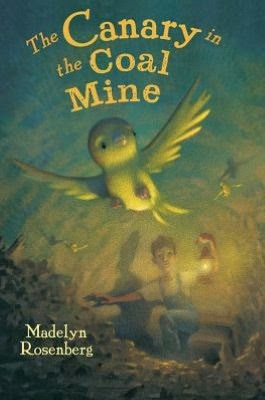 For decades people relied on more than their musical melody or flash of color to brighten their day; canaries specifically were used to detect gases poisonous for the workers in coal mines. Their unique ability to sense danger prior to its harmful effects on humans was vital.  In her first novel for children, Madelyn Rosenberg (Happy Birthday, Tree!:  A Tu B'Shevat Story) vividly creates possibilities in Canary in the Coal Mine (Holiday House) set in the Great Depression era of West Virginia.

Bitty flattened himself against the back of the cage as the Gap-Toothed Man reached his fat hot-dog fingers through the front.
"Here, birdie, birdie," the man said. "Come on, birdie. Hurry up, now." The meaty fingers opened and closed.  Bitty swerved right, then ducked low. He didn't duck low enough.
"Gotcha."

Bitty, Chester, Alice, Uncle Aubrey and Aunt Lou are some of the canaries living in a cage called the Big House cared for by a miner's son, Jamie Campbell.  Each day they are taken into the No. 7, a coal mine, as insurance against bad air.  None of them have ever known life outside of a cage, never flown in freedom around or beyond the mining community of Coalbank Hollow.  Bitty, small in stature but not in heart, is about to change all that.

After reading a newspaper article lining their cage, an idea forms in his mind, a plan to escape, and a goal, when accomplished, which will better the lives of the miners and the canaries.  Smart enough to be afraid, but strong enough to escape, Bitty finds himself a passenger on a train to Charleston, West Virginia, riding on top of a coal car.  It is there he meets the first of several friends who will help him in his mission.  Eck, one of a large group of mice employed at the Gilmer Inn in Charleston, is a cat trainer, making sure they get the proper amount of exercise each day.

At the Chesapeake & Ohio station Bitty finds a place to rest at the end of the each day with Clarence, a pigeon, his family and friends, company birds assigned to care for humans.  A group of grackles, led by Viper torment and tease, seagulls, Gladys and Phil, making their home in the local dump, offer support and connections, and Dolly, a chimney swift, knows every, well almost, place in town.  Added to the mix is an unwanted guest who followed Bitty from Coalbank Hollow, Cipher, a hawk who loves to taunt before the kill with the haunting words, fee, fi, fo, fum.

As the narrative progresses the tension in the storyline builds momentum.  One setback, and even tragedy, after another plague Bitty and his friends; illness, destruction of his carefully constructed communication, a deadly attack and the horrific happenings on the home front.  How is it possible for one tiny bird to succeed in bringing the inventor of the Whatchamacallit and a bird-loving legislator together? Can a single act make a difference?


As I read Canary in the Coal Mine I found myself gently, slowly drawn into the story.  The more I read the more I became involved in Bitty's adventures and his commitment, developing an emotional attachment to the tale and the characters, animal and human.  Madelyn Rosenberg constructs a world within our world wholly believable through lyrical description, dialogue and Bitty's thoughts.  It is a world populated by beings good and bad exhibiting kindness and cruelty, unexpected heroics and steadfast friendship.  Here are some passages from the story.

"I respect history; I just don't want to be history.  I'm going to make things better.  You'll see."   As Bitty said it, he couldn't help thinking of everyone---the union men, his own father---who had tried to make things better but had ended up the worse for it.
"Do you think you'll be warm enough?" Aunt Lou asked.  She dropped her voice to a whisper. "And Bitty, do be careful of that hawk.  She's crazy as a bedbug.  There's something about her that's not quite right."

The train passed through woodland, other coal camps and a burning slag heap---the waste left after the coal had been mined and sorted.  The houses seemed to get smaller and poorer until there were no houses at all, just a neighborhood of tents that made the Campbells look like millionaires.  One family sat by a fire, but they weren't cooking over it.  A baby wailed, her voice so sharp that Bitty heard it over the chugging of the train.
"Hard times," Eck intoned. "Someone once said: 'If you keep hope in your pocket you will lose it.  It's best to keep hope in your heart.' "

Bitty looked up at the night sky and drew in a breath.  Back home, he could see only a few stars, shining like cut glass on the small strip of sky that was visible from Jamie's bedroom window.  But here?  Bitty couldn't even count them all.  There must be hundreds.  Thousands! He felt as if he could fly up and touch them.  He felt as if he could catch them like the summer fireflies that sometimes glowed from a Mason jar on Jamie's nightstand.


Madelyn Rosenberg was gracious enough to expand on some of the comments left in her acknowledgments and an author's note at the book's end via a series of emails.  Ten years ago when she began work on this story she did do some research but for the most part the story was completed before  she went back and looked further in earnest.  As a newspaper reporter she conducted interviews with miners giving her a background.  Oral histories, newspaper articles from the late 1920s and early 1930s, visits to West Virginia, books on coal strikes and the history of West Virginia, digging into patents and coal mining equipment, all contributed to the historical sense the reader gets from this title.


Canary in the Coal Mine written by Madelyn Rosenberg is a work of fiction which will lead readers to the facts.  It is the quest of one small being, aided by conviction and friends, to make his corner of the world safer, better, for those living there.  It is on the last page of the book, when asked where they are going next, that Bitty utters a single word, a word which expresses the essence of this story..."Up".

Follow the link embedded in Madelyn Rosenberg's name above to gain access to her website.  Here is a link to the publisher website containing an excerpt of the book's beginning and activity sheets.  If you think the artwork on the cover is familiar here is a link to more illustrations by Chris Sheban.