I've golfed courses so breathtaking I would have rather taken pictures of the fairways instead of swinging my clubs at a tiny ball to explore the distance.  Golfing in rain, swampy mud, over and through water and even in snow, I've come to appreciate the incredible skill associated with the game.  Duplicating the combination of grip, stance and swing that cause the ball to soar exactly where it needs to go, again and again, is an art. 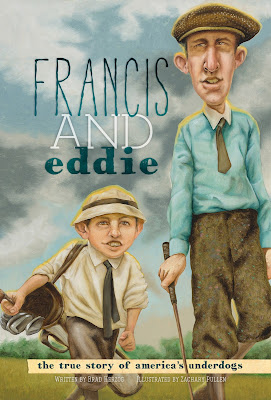 In 2002 The Greatest Game Ever Played (Hyperion) written by Mark Frost was released but it wasn't until he wrote the screenplay for the movie of the same name (2005) that Francis Ouimet and Eddie Lowery came to my attention.  It's a rare day when I see the movie before I've read the book.  Recently the title and cover of another book caught my eye.  Francis and Eddie:  The True Story of America's Underdogs  (Why Not Books) written by Brad Herzog and illustrated by Zachary Pullen is a picture book re-creation of the events from the 1913 U. S. Open played at The Country Club in Brookline, Massachusetts.

One sunny September morning in the quiet village of Newton Lower Falls, Eddie Lowery crept along the platform at the trolley station.

With this opening sentence you might be wondering why Eddie Lowery is sneaking about at the trolley station.  Eddie is ten years old, only four foot tall and supposed to be in school.  Eddie's sole purpose is to arrive at the 1913 United States Open.  He wants to caddie for Francis Ouimet.

Francis is only twenty-years old, the son of a gardener for the folks who frequent The Country Club in Brookline.  From the time he was a child, living across the street from the golf course, Francis developed a love for the game and considerable skill on the links.  He is the recent winner of the state amateur championship.

Upon his arrival Eddie is quick to inform Francis his older brother, Jack, will not be able to caddie for him during the tournament.  Unlike Eddie, Jack has decided to attended classes.  Noticing something about Eddie's desire, Francis agrees to let him be his caddie.

Due to the solid advice of Eddie, Francis's rocky start the first day of qualifying rounds shifts, putting him in second place behind the reigning British champion, Harry Vardon.  During the first two rounds of the championship, Francis Ouiment manages to finish only four strokes behind Vardon and Ray, another British Open winner.  During the second day of play, with rain and high winds, Ouiment closes the gap to the crowds' amazement and obvious delight.

On Saturday the crowds are huge, all waiting to see the results of the playoff.  Walking to the course Eddie tells Francis today is the day, he has seen the score like in a dream.  On September 20, 1913 history is made, a friendship for life is formed and a father is finally willing to support his son's dream.


From the opening four pages, whether you are a golfer or not, young or old, the writing of Brad Herzog reaches out and reels you into the story.  Readers are cleverly given background information on both Francis and Eddie as excitement builds toward Eddie's proposal of being a caddie for Francis.  A combination of dialogue and narration reveals personal details about both Francis and Eddie, making these three days more than dates in history 100 years ago.  As readers delve further into the story the descriptions are so good you feel like a spectator standing within earshot of the two every single day of the championship rounds.


If the words of Brad Herzog bring you into the story, the oil paintings of Zachary Pullen breathe life into those words giving you a sensory glimpse into every scene he captures.  Pullen knows people and he knows golf.  His visuals in this book illuminate the relationship of Francis and Eddie, the personalities of each and the sheer passion both have for the game.

The view on the front jacket is enlarged to become the sole image on the front and back cover.  Beneath the text on the title page is a sketch of a significant visual appearing later in the story.  Pullen's focus on the faces of all those involved is exquisite in detail and in the conveying of emotion.  Although most of his illustrations are edge to edge single pages, he does not hesitate of make good use of white space pulling his characters out to create emphasis.  His picture of the final shot will make you stand up and cheer as the one in the clubhouse locker room will cause a lump to form in your throat.


The game of golf and two of its heroes has never been portrayed better than by author Brad Herzog and illustrator Zachary Pullen in Francis and Eddie:  The True Story of America's Underdogs.  This is a story about following your dream against all odds.  This is about taking a leap of faith and forging a bond that lasts a lifetime.  I highly recommend this inspirational title.  It will restore or enhance your faith in the impossible.

An afterword provides additional information about Francis and Eddie and the Francis Ouimet Scholarship Fund.  Why Not Books has pledged seven percent of the proceeds from the sale of this title to the fund.

Why Not Books is dedicated to the belief that books can make a difference in peoples' lives.

To access the author's and illustrator's websites follow the links embedded in their names.  Follow this link to an interview at Seven Impossible Things Before Breakfast with Zachary Pullen.  Enjoy the book trailer and assorted videos below.