A Slice Of Patriotic Life

For the first time I had the good fortune to attend the American Library Association Annual Conference & Exhibition held this year in Chicago.  While I met many amazing authors and illustrators this weekend, two stand out for their cheerful sincerity. They are a match made in heaven; their warmth for the people they meet and for one another is a joy to experience. 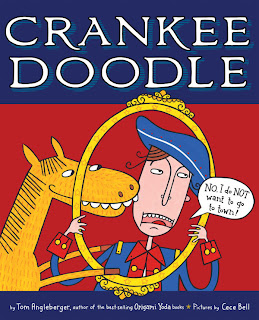 It came as no surprise that their most recent collaboration is a reflection of the zest they have for life; upbeat and full of humor.  Crankee Doodle (Clarion Books, an imprint of Houghton Mifflin Harcourt Publishing Company) written by Tom Angleberger with illustrations by Cece Bell sheds new light on the man and his pony made famous by a tune straight out of Americana. It gives readers a unique glimpse into the personalities of the Red-White-and-Blue duo.

Immediately Mr. Doodle responds with a verbose list of reasons why the idea of going to town is not in his repertoire of favorite places to go.  When pony suggests they could go shopping, Doodle's answer proceeds to point out how he already has too many possessions, the workmanship nowadays leaves much to be desired and the cost,

I might as well throw my money in an outhouse hole!

Pony, however, is not deterred. His next bright idea involves a feather.

Doodle is downright flabbergasted by the thought of placing something from a bird in his hat. Pony proceeds to elaborate by telling him macaroni would be a good name for his hat adorned with a feather.  This newest idea has Doodle working himself into a proper colonial tizzy. Hats don't need plumage and macaroni isn't even his preferred pasta.

When pony politely points out that macaroni can be defined as fancy, Doodle doesn't hesitate to expound on the finer points of a truly fancy member of the noodle family.  Easy-going pony has the perfect reply.

At that Mr. Crankee Doodle looses all sense of civility.  He tosses his so-called worthless headgear into the garbage followed by a first class tirade. Clearly pony wants to go to town. But his offered mode of transportation is met with scornful rudeness aimed at his body odor.

Silent glances are exchanged.  Pony's poignant, truthful sentiments crack Crankee. With a surprising twist the friends linked together through history and song ride off in spirited companionship. Destination...well-known.


As I noted in a review of a previous Tom Angleberger book, The Secret of Fortune Wookiee, his adept ability to shift between narrative styles is a marvel.  Through dialogue alone, two very distinctive individuals emerge.  Instantly we willingly abandon any sense of reality, embracing this conversation between the talking pony and Yankee Doodle, who seems to have gone over to the Dark Side for the day.

It's in the portrayal of the two as total opposites where the humor will have you holding your sides and bursting into laughter.  The pony proposes in single sentences versus Mr. Doodle ranting in a string of emphatic statements. While the conversation seems to be in the present based on word choice, Angleberger inserts references to the historic time period which adds to the overall hilarity.


Using a bold, patriotic palette Cece Bell renders the illustrations with gouache.  The jacket and cover set the mood for the entire book.  The pony looking hopefully happy at Crankee Doodle, who is on the verge of loosing any patience, however slim, he may have.  It's a study in opposites. How can you help not grinning?

Opening and closing endpapers are patterned in soft, golden macaroni on a darker background.  In the title page Crankee is framed looking thoroughly disgusted with the hint of the pony's mouth leaning in by his left ear.  A rather idyllic scene of the two sleeping in the meadow is featured on the verso and dedication pages.  All of the illustrations are double page spreads with the exception of two; employing a unique framing design.

Shifts in color and texture, grass, sky and trees, macaroni, another fancy pasta, and a series of buildings, illuminate the characters and their emotions as well as the flow of the story.  There's something about the pony's mouth with his exposed teeth, the eyes on both the pony and Crankee and the facial shapes, that elevate the comedy.  Little details such as the language of the period appearing on items and buildings which are clearly from the future (as opposed to the Revolutionary years) are further evidence of contrasts.  For readers such decisions equal all-out fun.


Tom Angleberger's debut picture book with illustrations by Cece Bell, Crankee Doodle will definitely have you singing the song quietly in your mind as you are laughing at the grump and his persistent pal.  It's understood this will be read and read again...at the same sitting.  Be sure to give each of the characters their own voice.  The narrative and illustrations invite readers to do so.  The pony adds his two-pence worth at the end in a historical note, finally singing as Crankee Doodle plugs his ears.

Please follow the links to Tom Angleberger's and Cece Bell's websites embedded in their names. (Cece has posted the actual notes from their car trip used to write this book.) Here is an interview between Tom and Cece that came out on Kirby Larson's blog after this post. In this video Tom talks about the idea for the book and the collaboration between him and Cece, their first.


UPDATE:  Be sure you check out this link loaded with artwork posted at Seven Impossible Things Before Breakfast.  Cece Bell gives readers the inside scoop on her process.
Posted by Xena's Mom at 3:27 AM