As stories are gathered and studied it becomes apparent there are more similarities than differences in our cultures.  There seems to be a common thread running beneath tales, motifs, which are then colored to reflect the country from which they come.  It's interesting to trace the origins of a story, to see how it has changed as it travels from place to place. 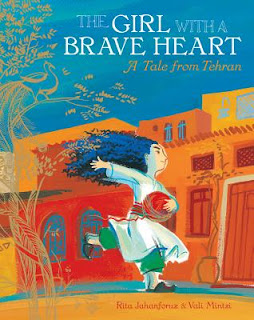 Some of the best stories come from the oral tradition of storytelling, passed on from generation to generation, parent to child.  Debut author Rita Jahanforuz, best known for her singing talents in the country of Israel, has written a folktale placed in the country of her birth.  The Girl With A Brave Heart: A Tale from Tehran (Barefoot Books) with illustrations by Vali Mintzi combines elements from a story told to her by her mother and those she added in the telling to her daughters.

On a quiet street in the city of Tehran lived a little girl called Shiraz.

After Shiraz's mother dies her father remarries a woman with a daughter her age named Monir.  Up until his death the family lives in harmony and happiness.  Within a day of his passing, all changes for Shiraz; she becomes a servant in her own home.

One autumn day with her tasks completed Shiraz goes to the balcony at the top of their house.  She has found a ball of wool left in her mother's belongings.  Before she can begin knitting a sweater, a wind lifts it from the roof like a balloon to a neighbor's yard below where it lands on a rose bush in their garden.

Feeling frightened but desiring to get this remnant from her mother's life back, she soon makes her way to the neighbor's door.  After several knocks, a smaller door within the larger opens, eyes peering out at her.  Shiraz's question is answered with a requirement, if she wants the ball of wool back, she must do some chores for the elderly woman.

Shocked by the woman's and her home's appearance, Shiraz follows her to the kitchen.  Handing her a hammer, she tells Shiraz to destroy everything on and around the sink.  She does not do as the neighbor asks but instead cleans the entire space and even prepares a meal.  When she shows the woman, her efforts are met with silence.

Twice more the lady hands her tools which could be used to ruin but Shiraz chooses to use them for good creating beauty from neglect.  As promised the ball of wool is returned but in thanks for all her work, Shiraz is told to leave by the back gate.  There she will find two pools of water, one clear, the other dark.  She is told to dive into the clear pool three times first, then three times into the dark pool.  No more in either.

Returning home, fearful of punishment, she knocks on her own door.  Shiraz is greeted by her stepsister Monir, then her stepmother, as if she is a complete stranger.  Her transformation into a beautiful young woman stuns them.  Her explanation for the change spurs them into action.

The next morning after a visit to the market, the stepmother begins flinging balls of wool from the balcony; one finally landing in the old woman's garden.  Hiding outside the neighbor's home she watches as the conversation between Monir and the old woman ensues.  Unlike Shiraz, Monir does exactly as the woman asks, causing destruction in the kitchen, the garden and with the lady's hair.

She does leave...by the back gate.  She is given instructions.  She does follow them; even exceeding them.  The results are unexpected.  The difference is the two girls; one seeing with her eyes, the other with her heart.


Following in the footsteps of all good tellers of tales, Rita Jahanforuz paints a vivid picture with her words of the circumstance in which the main character find herself.  The number three is used more than once in the course of the events; the three tasks, diving into the pools three times.  Readers are left to predict the outcome for both Shiraz and Monir when performing their work for the woman; she views what they have done without speaking a word until handing them the ball of wool.  These elements when joined by the conversational narrative and dialogue make this story timeless.  You can almost hear Rita Jahanforuz speaking it to you; into your heart.


When I first held this book in my hands, spreading the cover open, I marveled at the beauty in the shades of browns, oranges, reds contrasting with the deep turquoise, splashes of bright green and the gold etching of the tree, leaves and bird.  (In the title verso it said Mintzi used the Middle Eastern market place as inspiration for her color choices.) With little imagination you can hear Shiraz's footsteps running down the street lined with the richly colored homes, hair streaming behind, her cat closely following. Dusty old-gold opening and closing endpapers compliment the double-page illustration of the cover.

Pictures rendered with gouache using transparent and opaque layers throughout most of the book extend edge to edge across two pages wrapping around the text.  Those on single pages or as smaller insets still convey, as do the larger illustrations, a vivid sense of place.  Vali Mintzi's mixture of pale washed, fine lines with the bolder, heavier brush strokes fashions a texture which will have you reaching out to touch the pages.  One of my favorite illustrations is of Shiraz leaning over the balcony gazing down at her village seeking to locate where the ball of wool has fallen.


The Girl With A Brave Heart: A Tale from Tehran written by Rita Jahanforuz with illustrations by Vali Mintzi is a beautiful story in word and art.  Careful readers will see parallels to Cinderella, Diamonds and Toads as well as The Talking Eggs by Robert D. San Souci with illustrations by Jerry Pinkney.  Make sure this book finds a spot in your folktale collection.

By following these links to the publisher website readers can view more illustrations and do extra activities.  I am very impressed with the mission statement of Barefoot Books stated in part below.

At Barefoot Books, we celebrate art and story that opens the hearts and minds of children from all walks of life, focusing on themes that encourage independence of spirit, enthusiasm for learning and respect for the world's diversity.