What makes a legend a legend?  They are an interesting branch of the folklore tree. They are a mirror of the people, place and customs from which they originate.  By definition they are part of an earlier oral tradition, handed down over the generations, based upon a combination of known and unverified historical fact. 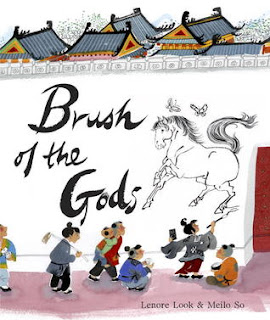 It is true that one of the most famous painters in Chinese history is Wu Daozi.  It is true he lived during the T'ang dynasty.  Brush of the Gods (Schwartz & Wade Books, an imprint of Random House Children's Books) written by Lenore Look with illustrations by Meilo So imagines what his life and more importantly, his death, might have been.

Wu Daozi looked at the brush in his hand and felt the soft hairs.  They tickled.

Wu is seated with other students learning the fine and honored art of calligraphy.  There is a precise way to make the ink with pebbles, another stone and water.  Holding the brush centered with their nose, careful strokes are made to create numbers.

As the other students copy the lines made on a tortoise shell by their teacher, a monk, Wu's brush seems to have a life of its own.  His brush does not make the necessary characters. His brush makes objects, flora and fauna native to his country.

Wu can't stop painting; his creations are getting bigger and better.  Walls in buildings and surrounding his city are his preferred surface.  His hands move quickly; perhaps the images are forming with such speed in his mind they are spilling out through his brush.  Over time his skills increase even more; to the point one day the inexplicable happens.

His painting of a butterfly is so intricate, so lifelike, as he watches, it takes wing and leaves.  Thinking his mind must be playing tricks, he paints another.  It too flies up and away.

Nothing he makes with his brush stays, everything comes to life.  People no longer give coins or food for his work.  The walls are bare.  The crowds who used to come and watch have left except...for the children on the streets.

They gather and their numbers grow.  Time marches on; those children bring their children to watch Wu Daozi paint.  What comes forth from his brush not only looks real but is real.

Such unearthly skill does not go unnoticed by even those in the highest ranks of society.  Wu is commissioned to paint a masterpiece by the emperor himself.  Years and years and years pass as Wu Daozi works to complete his finest piece, a piece which will reveal the the best mystery of all.


In an author's note as part of the verso, Lenore Look informs readers of her sources for information on which to base this book.  Her command of language beautifully brings his youth, his growth as a painter and the legends to life.  It's as if the soul of Wu Daozi's work has found its way into her words.  The story is told with a rhythmic flow of narrative mixed with possible conversations.  Here are a couple of passages.

With one eye wide open, the other in a dream, he painted so much that he knew not whether the sun was up or down or whether he was standing or sitting.

Tattered and shoeless, they formed a hedge around their friend.

Using watercolor, ink, gouache, and colored pencil Meilo So 's fine lines, delicate details and blend of colorful hues with blacks and grays take readers back in time.  Her initial illustration spread across the front and back jacket and cover portrays the marvelous magic people felt when looking at the art of Wu Daozi.  It was compelling, captivating and full of life...more than they ever knew.  It's interesting to note the color difference in the opening and closing endpapers; the first, a golden hue of morning, the second, the tranquil blue of twilight.

With the first page, a picture of Wu Daozi holding a brush staring out at the reader, we are as compelled and captivated by the work of So as those in Chinese history were by the frescoes and scrolls of Daozi.  Her pictures are fluid moving around the text creating a single impression, a stunning blend of the two.  Breathtaking two page spreads capture the brilliance of this master's work and the time period in which he lived.  One of my favorite illustrations is of Wu painting the first butterfly which flies away.  It is a beautiful example of Meilo So's adept use of varied mediums.


Brush of the Gods written by Lenore Look with illustrations by Meilo So is a stellar portrayal of an artist and his art.  It's one of those books which bridges the gap between then and now, bringing the best of one culture into many more.  It's about a little boy who allowed his heart to direct his brush leaving riches for the world to enjoy.  This title has already garnered four starred reviews.  I am hoping that even more honors will follow.


To read more about Lenore Look follow the link embedded in her name above.  Debbie Alvarez hosted a visit by Lenore Look at her school this year.  Follow a link to her blog, The Styling Librarian, and John Schumacher's blog, Watch. Connect. Read., to gain more insight about this visit.  Colby Sharp interviews Lenore Look here.  Julie Danielson, features the book at Kirkus and interviews Meilo So on her blog, Seven Impossible Things Before Breakfast (and more artwork here). For a pronunciation of Meilo So's name follow this link.  For additional information about the work of Meilo So follow the link to her website embedded in her name.  If you would like to see more images from this title follow this link to the publisher site.