In college there was a huge sign on the back of one of the dorm room doors for every one's favorite lines from movies, those unforgettable classics.  It seemed natural to continue the habit expanding to include phrases and sentences from books; although now kept in a notebook instead of on the other side of a door.  Some of my favorites quotations come from one of the world's greatest scientific minds.

Imagination is more important than knowledge.  For knowledge is limited, whereas imagination embraces the entire world stimulating progress, giving birth to evolution.  It is, strictly speaking, a real factor in scientific research. 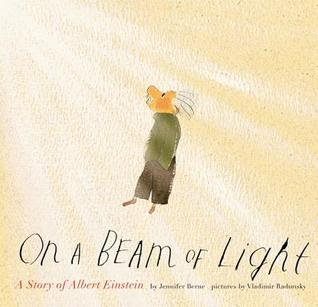 More so in the past then now, most biographical volumes for children tended to focus on an individual's accomplishments rather than their childhood, those years which formed the future.  In On A Beam of Light:  A Story of Albert Einstein (Chronicle Books) written by Jennifer Berne with pictures by Vladimir Radunsky, we are privy to those particular idiosyncrasies which made Einstein more human.  We see a blend of his marvelous right and left brain processes beginning at a young age.

Over 100 years ago, as the stars swirled in the sky, as the Earth circled the sun, as the March winds blew through a little town by a river, a baby boy was born.

Albert never spoke a single word until he was three.  Even then he much preferred to watch and think about his surroundings.  It was when ill, receiving the gift of a compass from his father, the seed for his search for answers was firmly planted.

If you want answers, you have to ask questions.  Albert became a regular question machine to the point his teachers felt he would never amount to much if he didn't behave.  Thankfully, that did not stop Albert.

Albert looked and wondered, noticing what most of us take for granted.  A revelation comes to him as he looks at sunlight during a bicycle ride one day.  This observation lead him to study light, sound, heat, magnetism, gravity...and numbers.  Numbers to Albert were like notes to a musician.

Albert's imagination lead to astounding discoveries, exciting possibilities and acceptance in the community of like-minded people.  He thought and he thought and he thought.  Thinking when gliding along the water in his small sailboat or playing his violin or eating an ice cream cone, was as natural to Albert as breathing is to the rest of us.

The birth of a single individual changed much in our world.  He answered questions and created more. The man who loved to wear shoes without socks left an impression which will linger for a very long time.


Jennifer Berne after reading more than fifty books, with precise and purposeful intent gleaned an informative and entertaining combination of information about Albert Einstein.  Her choices present a picture of a man who loved life, his world and took great joy in uncovering the secrets of the universe.  Even though she is depicting factual content she does so in the style of a storyteller; her respect and admiration of this person shining through in her sentences and phrasing.  She encourages her readers to see Albert Einstein as she does.  By repeating words such as reading, wondering, learning, imagining, figuring and thinking, she directly invites her audience to do the same.

His illustrations done in gouache, pen and ink expertly express the warmth and love in Einstein's home in his youth, his thirst for knowledge, his imaginings, his proof of everything being composed of atoms, his habits and suppositions.  Radunsky's use of line, color and layout is as brilliant as a beam of light.  He is unafraid of empty space using it to draw attention to those images present on the pages.  Several of my favorite illustrations are Einstein's parents looking at him in a carriage when he is one, when Einstein is in bed thinking about motion, all things moving about him, and when he is in his sailboat.


On A Beam of Light:  A Story of Albert Einstein words by Jennifer Berne, pictures by Vladimir Radunsky is an uplifting look in text and illustrations at one of the most brilliant men to grace our planet.  Berne and Radunsky bring him to life in such a way you feel as though you've met him, spent time with him.  This title belongs on any list of the best children's literature has to offer in nonfiction picture books.