All In A Summer

While it's true the Internet provides users with untold amounts of resources, the ability to converse with people on the other side of the world and endless networking possibilities, exchanges of information, I still hold the belief that inside the pages of a book, the same is true.  Sometimes the most wondrous happenings then or now are closer than you think.  When these secrets are revealed to you, it's like opening a geode. 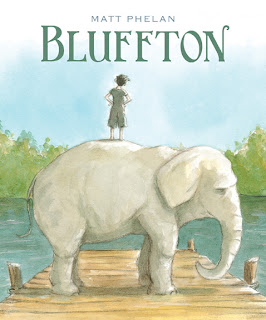 I was born and have lived in the state of Michigan for my entire life.  Walking through the botanical gardens at Michigan State University, spending days at the Henry Ford Museum, Greenfield Village, Mackinac Island and other parks, zoos, lakeshores, woodland trails and museums have enriched my sense of history and appreciation for our natural world.  In all those adventures, though, I have yet to do more than pass through Muskegon, Michigan.  Little did I know what happened in the nearby neighborhood of Bluffton in the summers of 1908, 1909 and 1910?  Illustrator and author Matt Phelan knows.  His newest title, Bluffton: My Summers With Buster (Candlewick Press), opens up possibilities, blending history and fiction in a pictorial journey back in time.


It's not every day a train rolls into the town of Muskegon, Michigan filled with vaudeville entertainers, an elephant and a zebra, but on a summer day in 1908, that's exactly what Henry Harrison saw.  The troupe has come to vacation in the cottages at Bluffton; the heat having caused the closure of all the theaters.  Henry decides to explore the next morning along the western shore of Lake Muskegon.  Crashes and flying bodies introduce him to Jingles, Louise and Buster Keaton.

Leaving for home with the promise of a baseball game the next day, Henry (and readers) get the inside scoop on vaudeville and the people at The Actors' Colony from a man on the porch.  For the next three months Henry and Buster play baseball, fish, swim, pull pranks and talk, reveling in all the peaceful bliss of summer.  Each can't help but hopefully wish for what the other has; Buster, a normal boy's life, Henry, a life on the stage.

Henry attends school, helps out in his father's hardware store and juggles away the months, longing for the companionship of his summer pal. Another boy who is part of the traveling group, Lex, keeps him informed with the latest news through letters, including problems the Keaton family have had with authorities about their knockabout act.  When they return Henry is more determined than ever to learn an act, to be on stage.

During the second summer more of the two boys' personalities and lives are revealed in their continued conversations and in the events experienced by both; boarding house fires, train wrecks, elaborately rigged contraptions, Harry Houdini, baseball and the presence of Sally, a neighborhood friend of Henry.  Regardless of an initial failed attempt and caution urged by Buster and Lex, an incident teaches Henry more than one lesson during their absence before the third summer in 1910.  Only three sentences are spoken throughout the pages of the last summer shared by Henry Harrison and Buster Keaton.  But the visuals speak loudly and clearly of glorious memories made.


In an Author's Note at the book's conclusion Matt Phelan writes about his admiration and love of all things Buster Keaton.  Keaton's autobiography, My Wonderful World of Slapstick, is the source of his inspiration for this title.  Phelan's knowledge is evident in every word.

His use of text is minimal but deliberate, providing contrasts and tidbits of information.  It acts as a main thread upon which all the conversations written and pictured are tied and woven together. Every verbal exchange provides insight into what it might have been like to experience those three summers.


Using watercolor Phelan illuminates the past for his readers.  It's as if we are peering through a looking glass watching the days of those three summers, the months in between for Henry, unfold before our very eyes, panel by panel.  We are given clues as to the time and its passage with details in the inside and outside surroundings.

There is a delicate intricacy to Phelan's work.  He might be giving us a panoramic view of a particular scene or a close-up of a facial expression, conveying much through his deft skills as a graphic artist.  One example early in the story is Henry, apple in hand, casually leaning outside against the train station building.  In the next panel from behind we watch him as the train arrives at the station.  He lifts the apple to his mouth for a bite.  The view shifts to the train, a ramp being put to the open door of a car. Henry looks startled, apple still in hand.  In the final panel we see the apple falling, bouncing up as it hits the ground.  Without a word Matt Phelan has told us that something extraordinary has been seen by Henry.

I feel fortunate that Matt was able to answer some questions I recently asked him about his work on this book.  My questions are in black, his replies are in gray.  Thank you so much Matt for making the time to do this and for including some artwork, the completed watercolor of Buster and a thumbnail of their first game of baseball.


When you were working on Bluffton, did the script (narrative) come first or did you visualize the story first?

I always write a complete script first and that goes through the usual editorial process. I don't start drawing until everyone feels the story is as tight as it can be. That said, the writing process for me is basically describing what I see in my head, panel by panel.

I am no artist at all (pitiful is the word that comes to mind) so I am wondering when you work on your illustrations is the entire book mapped out like a storyboard first in pencil?  Thumbnails?  What comes next after the first step is done?  Is it done again in pencil or is ink used? Are more details added this time?  Is the watercolor the final step? Was watercolor all that was used in the final work of Bluffton?  Do you enlarge the illustrations or is that done in the publishing process? 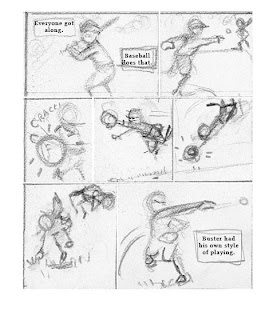 Thumbnails always come first. Very small, very loose. Those are scanned in to the computer and the words are added. From those, I make a second round of layout sketches which are in some ways even looser, but clearly place the dialogue and composition elements. Then I draw the final art on a new sheet of watercolor paper in pencil and paint it with watercolor. The final art is 100% larger than the size in the book.

I am also wondering if you have ever visited Muskegon or Bluffton?  After reading your book, I sure hope to visit myself. J  When you consider I’ve lived in Michigan my entire life, it’s sad I have never done anything but pass through there before now.

I spent a week in Bluffton in 2010 before I wrote the script. It was well worth it. I really gained the necessary feeling that I needed to do the book.

Were the characters of Henry and Sally based upon anyone real in or near Bluffton during that time period or are they entirely fictional? (I know you said they are fictional in your author’s note but where did Henry and Sally come from?)  I love how you created this story around those three summers.

Henry and Sally are entirely fictional. For Henry, I basically just imagined how I would react if I met Buster as a kid. Three years is quite a lot of time for that age, and part of the challenge in writing the book was to age the kids physically and emotionally from summer to summer.

I remember reading in your author’s note how you and your brother watched the Buster Keaton movies projected on the bedroom wall.  What sparked the interest in those movies?  Did your study of film and theater in college increase your passion for this master actor? 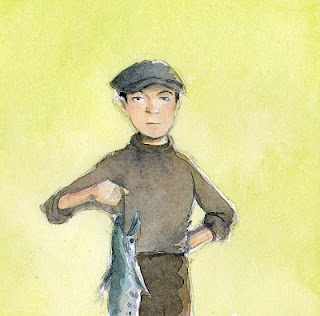 As a kid, I just responded to how hilarious those movies are. They really haven't dated. Growing up in my family, we never had a stigma against black and white movies. Some kids do (or think they do) today but I'm pretty certain that a few minutes of a Keaton film could change that. As I got older and learned more about film and acting, my admiration for him grew exponentially. I believe he was the finest filmmaker of the silent era and certainly one of the greatest film actors. There isn't a single moment of overacting in any of his films.

Bluffton:  My Summers With Buster written and illustrated by Matt Phelan is an outstanding tribute to some of the best times in the life of Buster Keaton as a youth.  It is also a story about finding your niche in life; discovering how to best use your gifts.  Even after reading it three times, I continue to find enjoyment in the illustrations, noticing a detail missed previously, and in the conversations between the characters.  This book is a historical fiction treasure.

To access Matt Phelan's website follow the link embedded in his name.  Here are two links to articles on his blog, The Road to BLUFFTON, Part One: Buster Keaton and The Road to Bluffton, Part Two: Vaudeville.  For a peek inside the book, more visuals, this link takes you to the publisher website.  Here is the link to a post Matt Phelan did recently at the Nerdy Book Club about a researcher's dream come true.

This link will take you to an introduction to the title and a Q & A with Matt Phelan.  This link is to an interview with Matt Phelan at Seven Impossible Things Before Breakfast with Julie Danielson.
Here is a video interview which was conducted during the American Library Association Annual Conference & Exhibition in Chicago this summer


Here is a trailer for the book.