And The Winner Is...

Beginning with my youngest patrons' first visit, through song, dance and hand motions, I introduce letters and numbers explaining, one will help them find fiction (even if organized by genre), the other will give them direction in locating nonfiction materials.  I tell them repeatedly year after year, if they know their letters and can count, they will be able to locate the correct book in any library.  The two systems, alphabetical and numerical, work together to create addresses for every item in the library.  Their school library is a lively practice field for using the public library, moving them toward independence. 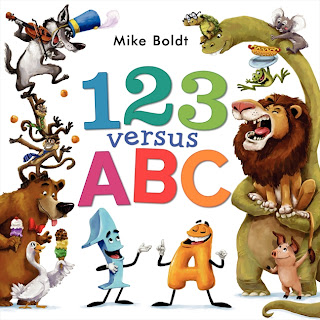 In this respect numbers and letters or letters and numbers have equal importance.  But in that wonderful world of "What-If", what happens when letters and numbers arrive at the same place at the same time believing themselves to be the guest of honor?  What happens is 1 2 3 versus A B C (Harper, an imprint of HarperCollinsPublishers) written and illustrated by Mike Boldt.

Hello! I'm so glad you chose to read this book about Numbers!

Hi! I'm so happy you chose to read this book about Letters.

So begins the book and the debate between the number one and the letter A.  The crowd and volume grows as additional numbers and letters chime in the lively discussion.  Whose book is this anyway?

Matters escalate when one distinguished, briefcase carrying alligator appears.  He's wondering what to do as he has been asked to be in the book.  Number grabs him because there is only one.  Letter takes him back because alligator begins with A.  The fun really starts when two bears arrive in cars now numbering 3.   2...3...B...C  Oh, boy...hang on readers.

An explosion of letters and numbers start to fill the pages; four dinosaurs carrying five eggs, six frogs delivering eight hot dogs to seven gobbling geese along with nine ice-cream cones.  Yikes!  It's a letters and numbers jamboree! Letter A and Number One are really getting in the groove as more animals arrive with items galore.

As the numbers and participants continue to grow, the two of them are actually starting to realize the absurdity of the whole predicament, especially when a pile of twenty-five balls of yarn appear.  Now let's see...  The duo reach a simultaneous conclusion strolling off, arms around their shoulders, until.... What's he doing here?


Not missing a beat, Mike Boldt begins the spirited dialogue on the double-page title spread.  Speech balloons hold one, two, three or four sentences, phrases or words depending on the fervor of the speaker and their desire to make a point.  You can feel the tension and speed of the quick-witted banter increase as the numbers get higher and the end of the alphabet gets closer.  The best part of the entire conversation is the fun the two are having trying to gain an advantage.


Opening the jacket and cover to see the entire matching illustration, the confused alligator is on the left (back) wondering if this is a book about numbers or letters and where is the front cover anyway?  Using Corel Painter Boldt digitally creates a colorful cast of characters.  His numbers and letters, like cartoon personalities with stick arms and legs, move freely among the animated animals.

It's the attention to detail coupled with the narrative which will have readers returning again and again to look over each and every page.  On one two-page spread readers can see a goose balancing two ice-cream cones on their bill, a frog sporting a black bow tie taking an order with notepad and pencil, and four dinosaurs delivering not just plain eggs but decorated Easter eggs.  By the time Number and Letter are up to 16 and 17, Pigs and Queens, the two are seated at a table, wearing headphones like two sportscasters.  Each illustration is alive, in motion and just plain fun.

1 2 3 versus A B C with words and pictures by Mike Boldt is an alphabet and counting book all rolled into one rollicking good time.  It is the perfect book to use as creative drama with students.  In fact as I was working on this review this conversation took place on Twitter.


Wouldn't it be fantastic to get a whole class of upper elementary students to act the book out for younger students?

By following the link embedded in Mike Boldt's name you will be taken to his website.  The second link is to his blog where he talks about the process for making this book.  This link is to the publisher website and a one page activity sheet. Plus you have to love a book with a dedication that reads: