On January 28, 2013 the American Library Association presented the 2013 Youth Media Awards.  Everywhere people not able to attend in person were glued to computer screens watching the live stream.  I have watched the video posted on YouTube repeatedly (I'm listening to it again as I write this piece.)  Since I began my life's greatest joy as a teacher librarian in 1973, it has always been my wish to attend the banquet honoring the winners.  With tears in my eyes after hearing the announcements of many of the winners, I resolved to get to Chicago this year.  And I did.

Chicago is one of my favorite large cities to visit.  As the taxi veered (are all of those drivers trying to get a position in the Indy 500?) along Michigan Avenue toward my hotel Saturday afternoon (my train was late), the tops of the buildings were shrouded in clouds.  It was my goal to get to the Exhibit Hall as soon as possible to meet author/illustrator Matthew Cordell.

Of course, since my last visit to Chicago, my hotel had moved.  The building was still there but it was renamed.  By the time the helpful desk clerk at the Hilton located my hotel, one of two DoubleTree buildings, I had less than thirty minutes to get to McCormick Place on the other end of the city. 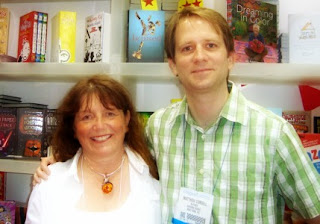 At this point I was hoping my cab driver was vying for the Indy 500.  After race walking up stairs, registering and locating the proper aisle, I spotted Matthew.  He was getting ready to leave.  I nearly broke into a run with a huge grin on my face.  After meeting him, chatting briefly, getting one of my books signed and receiving a charming, original unicorn drawing, I knew this was the first of many magical moments I would experience this weekend.

For the next two hours I roamed around the Exhibit Hall marveling at the sheer vastness of the area, the extent of the displays and the array of titles everywhere I turned. At one point I stopped in one of the aisles, looking back to see Jerry Pinkney on my right and David Small with Toni Buzzeo on my left. I was giddy with book bliss. 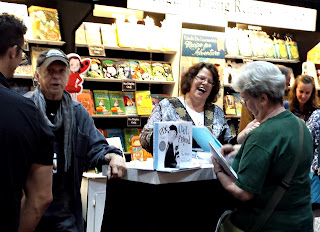 I met Leonard Marcus who signed my copy of Maurice Sendak: A Celebration of the Artist and His Work.  The delightful Molly Idle graciously signed my copy of Flora and the Flamingo.  To my surprise Jesse Klausmeier was next door, dressed in a pink tutu, laughing and signing books for all her fans.  Luckily one of the posters Dan Santat designed for Crankenstein was still 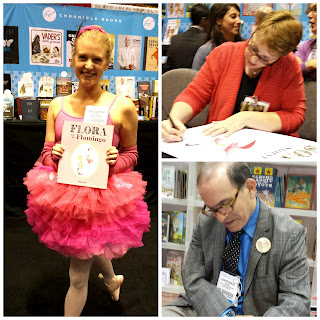 Unexpectedly walking from the hall, I caught a glimpse of...it couldn't be...Lois Ehlert.  With energy I didn't know I still had, I changed directions and got in line.  I freely admit tearing up when meeting her.  She said, I'm just a person.  I replied, Not to me you're not. The woman assisting her came up to me after I got my book signed.  She gave me a mock-up of her new book to look at while standing there.  I have to tell you, it's going to be one of her best titles ever. 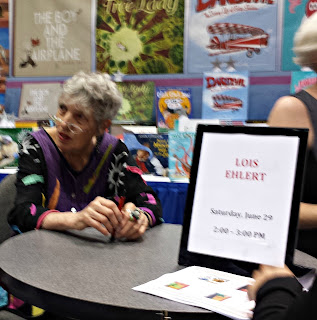 Saturday evening a group of authors and Nerdy Book Club members gathered at the home of author Elizabeth Fama whose book, Monstrous Beauty, won an Odyssey Honor award this year.  She graciously supplied a delicious buffet and an atmosphere conducive to chatting about books and reading.  In chairs scattered about her lovely backyard we met and talked with people who we only knew virtually previously.  I even got a lesson from Mr. Schu on how to use Vine.

I loved speaking with author Laura Golden (Every Day After) and her husband, Michael as well as Liesl Shurtliff (Rump:  The True Story of Rumpelstiltskin), hearing their thoughts about the writing process and books in the works.  Surrounded by all the Nerdy Book Club people it felt like the best kind of family reunion.  It was an evening electrified by people who love and care about many things in common.  (Laura blogs about it here, including the names of those present.)

I barely slept Saturday night, so full of excitement for the next day.  I hurried over to the Exhibit Hall Sunday to meet with Kellie Celia, the Walden Pond Press Marketing Communications Manager.  We strolled around exchanging ideas about books and getting them into the hands of our readers.  Our first stop was to meet Tom Angleberger and Cece Bell, two people filled to the brim with happiness.  Cece signed my copy of her Geisel Honor book, Rabbit & Robot: The Sleepover. They both signed their new title Crankee Doodle. 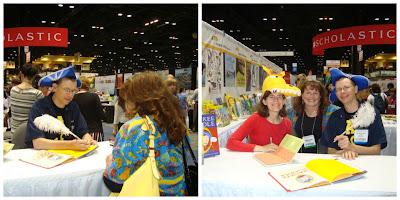 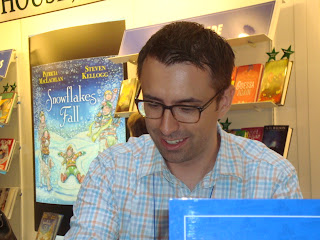 From there I had the privilege of meeting Jarrett J. Krosoczka, getting a couple of the Lunch Lady books signed (I'll be giving one of those away soon.)  His exuberance is contagious.  Colby Sharp had advised me to go to the Artist Alley area where I met Matt Phelan (The Storm in the Barn, Around the World).  I was able to get one of the few remaining ARCs of his new book, Bluffton, plus signed prints of Keaton.  He explained his illustrative process to me.  By now I'm absolutely glowing with the amazement of the day. One hour had passed.

As I was wandering in the aisles, I received a text message.  It was from a person whose blog I have been following for years.  When we spotted each another we both broke into grins and hugged.  I finally got to meet Jules Danielson from Seven Impossible Things Before Breakfast.

Next I waited in line to meet Eric Rohmann and Candace Fleming.  Even though I already have copies of Bone Dog and Papa's Mechanical Fish, I really wanted to talk with them both, however briefly; to express my appreciation for their work.  They both revealed tidbits about how these two books were created. 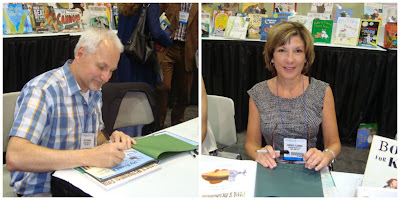 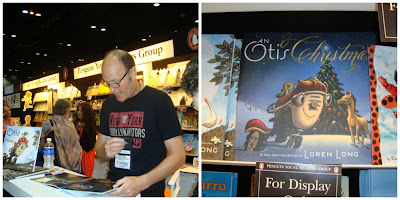 I putt puff puttedy chuffed my way over to Loren Long's meet and signing line.  He is as sincere and wholesome as his character Otis.  The gentleman standing with Loren directed me to the f & g of the new book coming out in October, An Otis Christmas.  Be sure to add this title to your list.  Filled with the spirit of the season, it's a touching, heartwarming gem.

Even though it was hours away, I headed back to my hotel to get ready for the epic evening, The Caldecott, Newbery and Wilder banquet.  I still had another surprise in store before the doors of the Sheraton Ballroom opened at 6:30.  Due to the thoughtfulness and generosity of a PLN member, I was invited to the Random House Fall 2013 Preview Tea. 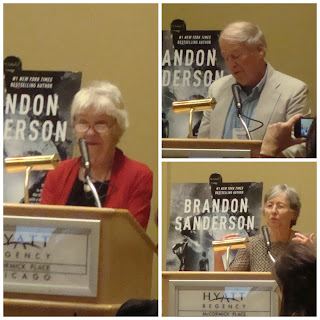 Can you imagine my amazement to discover I was in the room with not one, not two, not three but four well known authors?  I was able to get books signed by all four, Patricia MacLachlan, Steven Kellogg, Cynthia Voigt and Brandon Sanderson.  After Patricia MacLachlan hugged me, I think I floated back to the table.

Thanks to the kind-hearted Brian Wyzlic who advised me about the shuttle to the Sheraton, arrival at the event was timely.  The very air outside the ballroom was charged with anticipation.  Nerdy Book Club people gathered; more people were meeting one another for the first time.  As she was leaving for another commitment, Donalyn Miller looked to the gathered group and whispered, Someone please check Colby Sharp to make sure he doesn't have an air horn. I've laughed about that over and over again. 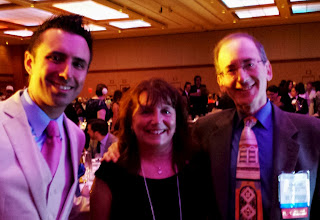 From the moment the doors opened until I hailed a taxi for the ride home, every minute was pure joy.  I thought my heart would burst.  The group at our table, the delectable food, pictures of the dessert which was tweeted and re-tweeted, videos and pictures projected on large screens on either side of the dais, the laughter, conversation and the mingling with authors and illustrators before the award presentations and speeches, were all pieces in this picture puzzle being created in my memory.  Paul O. Zelinsky was introduced to me by Jarrett J. Krosoczka.  Laura Given talked with Jon Klassen while I listened.


The speeches given by Jon Klassen (Caldecott), Katherine Applegate (Newbery) and Katherine Patterson (Wilder) were mirrors into the creative souls of each; individual but united in their desire to bring the very best to their readers.  Their words made us laugh and cry together.  People in the ballroom that evening were in the presence of kidlit royalty; you could feel it like a warm, gentle breeze on a summer's eve surrounding you on all sides.

After the festivities inside the ballroom, the medal and honor winners along with their trusted friends, greeted all in a receiving line.  While waiting in line, noticing Jerry Pinkney, I sang the song from John Henry to Laura Given.  Were we giddy with the events of the evening?  Completely.  To be able to shake hands with each of these people and express your gratitude for their books while looking them in the eyes, was golden.

The last person in the line was Katherine Paterson.  When I told her I had in fact read her first published book as well as many others, she said, Then we have a history together.  I was so touched by her genuineness, I started to cry.

I think my final tweet in the early hours of the morning sum up exactly what this weekend means to me.

For the past two days and tonight I got to live in a dream come true.  Thanks to all authors and illustrators.  You are my heroes. Always.

Thank you everyone for sharing this dream with me. 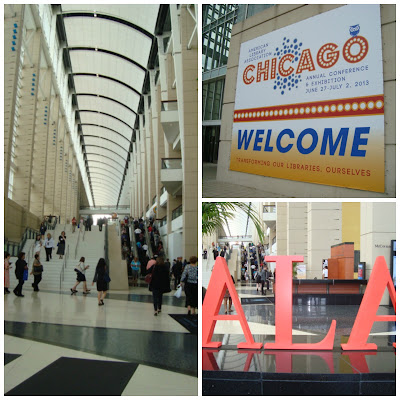