As clearly as if heard yesterday instead of decades ago, I can remember our instructor of Safety Ed 101, a required course for freshman at Central Michigan University, saying there is no such thing as an accident.  In his opinion every such event can be traced to human error.  Based upon personal experience I would say his assessment is fairly accurate. 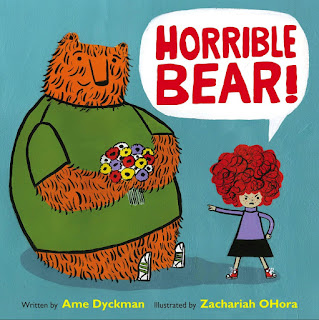 With that being said is life truly all of one thing or the other?  Are there not incidents with unplanned and surprising results?  The energetic collaborative duo of Ame Dyckman and Zachariah OHora that brought readers, Wolfie The Bunny (Little Brown and Company, February 17, 2015), has returned with a new title.  Horrible Bear! (Little, Brown and Company, April 5, 2016).  With a snap a kite flying expedition ends in uproarious and ruinous results.

A girl peeked into Bear's cave.  She reached---but he rolled.

The unsuspecting Bear has no idea he just crushed the girl's kite which unfortunately drifted through his doorway, landing on his sizable stomach.  Immediately yelling she erupts in anger, charges out the door, down the mountain, and past a picnicking goat.  Every step fuels her outrage as she heads for home.

Meanwhile back at the top of the mountain Bear is indignant, working himself into a terrible temper.  As he gives voice to all the unjust actions of the girl, an idea pops into Bear's mind.  He has a purposeful plan.  He pursues this purposeful plan which could not end well.  As Bear leaves his cave furious, the girl enters her home equally angry.

Nothing can deter the girl from continuing to rant.  Without thought or design she causes damage.  With sudden realization she runs to the door of her home.  Swinging it open she comes face to face with Bear.

Altered perceptions alter circumstances which alter behavior.  Usually.  For everyone.  But...


Ame Dyckman has a distinct knack for depicting pure true emotion.  Her characters feel deeply and with passion. Using a blend of dialogue and narrative every thought and action in any given moment is precisely portrayed.

Each sentence is carefully and simply worded contributing to impeccable pacing.  Through the repetition of key words and phrases readers will find themselves willingly joining the characters in their story.  Here is a sample passage.


The color palette, red, orange, yellow, purple, green, black, white and gray, selected by Zachariah OHora signals fun, lots of fun.  On the open dust jacket his signature use of black lines draw our attention to his finer details, facial expressions, the flowers, footwear, fur and the mop of red hair on the girl.  To the left, on the back, Bear is riding his purple bicycle, carrying his bat pal in the basket.  They are surrounded by a circle of flower heads.

Using the same background color as a canvas on the book case, OHora gives us a before (on the right) and after (on the left) portrait of the kite, sans string.  The opening and closing endpapers, on white, are extreme close-ups of the characters' heads.  On the former is the girl.  On the latter is Bear.  On the dedication and title pages, a single image begins the story of the kite flying mishap.

The illustrations, rendered in acrylic paint on 90-pound acid-free Stonehenge printing paper, contribute to the considerable charm of the story alternating in size based upon a desired impact.  Most of them are either single or double page spreads with two exceptions; when a group of three shows a quick succession of change.  OHora's perspectives are masterful bringing us close or farther away from the flow of the story.

I found myself stopping at every page turn looking at the details; Bear holding a tiny teddy bear, the goat's dressy attire and his squirrel companion's movements, Bear's camp T-shirt, the title of one of the girl's books, the familiarity of her favorite toy and the disheveled look of Bear when he arrives at the girl's house. One of my favorite illustrations is a close-up of Bear's reaction to the girl's dilemma.  It is on a single page of white. (I really like the use of the heavier matte-finished paper, too.) All we see is a close-up of one of Bear's paws.  It is extended and holding a solution to one of the girl's problems.  It's a powerful representation.


Horrible Bear! written by Ame Dyckman with illustrations by Zachariah OHora is a delightful story about jumping to and out of conclusions.  A willingness to admit a mistake makes the path to a lasting friendship much shorter.  You could not ask for a better read aloud or a book begging to be shaped into a reader's theater.