More than one million years ago their ancestors roamed our earth.  It is believed they crossed a land bridge first stepping in North America about 250,000 years later.  Dating back to Chauvet Cave in southern France some 26,000 years ago they left a paw print next to that of a young boy.   More recent evidence would suggest the relationship between them and humans could date back as far as 40,000 years ago. 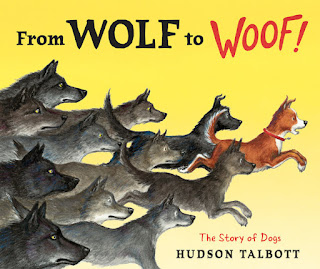 Long, long ago...
before humans and dogs were friends...
in fact, long before there were dogs,
there were...

They lived their lives in packs.  As a member of a pack, their survival was easier.  Whether a wolf ate was never the issue but when they ate depended on their standing in the group.  Following a certain wolf pack was an orphan pup.

He was not being accepted by the leader despite his attempts at being a lookout.  This pup kept a sharp eye out for their enemies, humans.  One night he howled and howled because he spotted a child.

The boy was alone too, looking for food in the garbage left by other humans.  He threw the wolf a bone to quiet his voice.  The pup took it and ran feeling like the luckiest canine alive.

Days after it was consumed the thought of the bone brought the wolf back.  When a second bone was tossed his way he kept it.  During what may have been the first game of fetch, something amazing happened.  From that moment forward a partnership was formed.

Others living on the fringe noticed how successful the boy and his wolf pup were in surviving and surviving well.  The word pack and family became synonymous.  As time moved forward the bond between wolves and humans became stronger as each relied on the other for specific needs.  Some not all wolves evolved into dogs with specific jobs; as varied as the number of breeds and mixes we have today.  Those still in the wild are a reminder of a gift given.


There are some stories written as if we are gathered, sitting in the glow of an evening fire and listening to a tale told.  This is one of them.  Hudson Talbott entertains but also adds pieces of truth to the narrative; the nature of wolves, how dogs' jobs changed as humans changed and their diversity today.  Dialogue in the form of smaller text and thoughts in speech bubbles adds humor and happiness to the story.  Here is a sample passage.

A buddy at last!
Someone to help me find food.
With your nose and my spear,
we'll take on the world!

Great!
Let's start
with that bone!

They became a great team, hunting and playing
together, and keeping each other warm at night.


The image on the front of the matching dust jacket and book case fits flawlessly with "a picture is worth a thousand words."  Hudson Talbott clearly and cleverly show the progression from wolf to dog.  The spot color of red in the title text and the dog's collar are a bit of design ingenuity.  To the left, on the back, an interior illustration is placed on the same yellow background.  It shows the initial incident of the orphan child throwing a bone to the lone pup.  The shade of blue on the front and in the sky on the back picture covers the opening and closing endpapers.

On the title page a howling wolf is show along with a dog that is seen several more times in the course of the story.  The modern dog offers commentary sure to bring a smile.  Rendered in watercolors, colored pencil, and ink on Arches watercolor paper the visuals reach out to the reader with complete charm engaging them in the story.

Talbott varies his picture sizes; two-page spreads, images crossing the gutter along with circular insets and a column, single pages or a series of smaller pictures grouped to show a sequence of time.  More than once he places circular, oval or arched images on a white background with elements crossing the frame to create more animation.  You get the sense that at any moment one of these illustrations could come to life.  There is a pleasing blend of soft texture and detailed lines in all his pictures in this book.

One of my favorite pictures covers two pages.  It is the defining instance between the pup and the boy.  The wolf covers most of the two pages, lying down, head on paws and with eyes closed.  Only a portion of the child's body is shown.  The background goes, left to right, from pale yellow to white.  I wish I could frame this picture.


From WOLF to WOOF!: The Story of Dogs written and illustrated by Hudson Talbott will certainly be read by dog lovers over and over again BUT it is a tale everyone will enjoy reading and hearing.  It's simply great storytelling.  I think you are going to need more than one copy.  I could even see using portions of this for readers' theater.  At the end of the book Hudson Talbott includes an author's note, additional resources for children and adults as well as websites devoted to the preservation of wolves and other endangered animals.

To learn more about Hudson Talbott and his valued work please visit his website by following the link attached to his name.  At the publisher's website you can view a few more images.   There is also a feature at NPR Books, How Dogs Evolved Into Our 'Best Friends' The two links in the introduction of this post will give you more insights.