And Then There Was One

There is a creation story from the Onondaga of the Northeast Woodlands called The Earth on Turtle's Back.  (It can be found in Keepers of the Earth: Native American Stories and Environmental Activities for Children (Fulcrum, Inc., September 15, 1988) by Michael J. Caduto and Joseph Bruchac with illustrations by John Kahionhes Fadden and Carol Wood.)   In this story there is only water and birds and animals able to live under, on and above the water.  Over the water and among the clouds is Skyland.

As an elderly chief's wife falls toward the water through a hole in Skyland created by the removal of the Great Tree, the animals below know she is different; she cannot live as they do.  Two swans catch The Woman From The Sky, holding her in their wings as the others try to get Earth from the very bottom of the water.  Several animals dive but it is tiny Muskrat who succeeds, floating to the surface, near death, grasping Earth in one of her paws.

Great Turtle volunteers to hold this bit of Earth.  As soon as it touches his shell it grows and grows becoming the land upon the water, our world.  For this reason, among others, the turtle is a sacred symbol of the Earth, wisdom and long life. 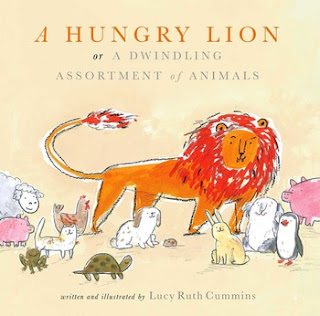 Today many animals inhabit our planet in the air, on the land and in the sea.  They act instinctively in the presence of one another.  In her first book, A Hungry Lion or A Dwindling Assortment of Animals (Atheneum Books for Young Readers, March 15, 2016) art director of children's books Lucy Ruth Cummins tells a tale relying on expectations.  The twists and turns it takes will have you in turn counting, gasping and laughing out loud.

Once upon a time there was a hungry lion,
a penguin, a turtle, a little calico kitten,
a brown mouse, a bunny with floppy ears
and a bunny with un-floppy ears,
a frog, a bat, a pig, a slightly bigger pig,
a woolly sheep, a koala, and also a hen.

These fourteen animals, for the moment, are casually in a row content and happy.  With a page turn and an exclamation by the unseen narrator, the story begins again...

Once upon a time there was a hungry lion...

This time the narrative is considerably shorter.  The number of animals has diminished; the kitten, a pig, and the sheep have vanished.  It's hard to look at the lion without suspicion.

As the story continues our narrator is even more startled; so much so that the words used change with the next two page turns.  The hungry lion is now in the company of less than four animals. Truthfully, this does not bode well for those remaining brave or fool-hardy souls especially when the king of beasts is whistling a tune.

Truly shocking events evolve until the lion, all alone, glares and strides off the page.  As if this is not frightening enough, the pages go black for reasons unknown.  Click!  A single light bulb illuminates an epic reveal involving a confection of gigantic proportions and .... click!

When the darkness is banished a second time be prepared for not one, not two, but three unforeseen outcomes.  Mother Nature is chock full of surprises.  So is the best kind of fiction picture book.


Deep within our storytelling psyche is a programmed response to the three words, once upon a time.  When reading or hearing those words expectations arise unbidden.  To choose to use those words Lucy Ruth Cummins sets the stage for what follows.

To have the narrator speaking in an aside along with the more traditional text heightens our curiosity and adds a new dimension to the tale. The use of adjectives at critical points in the story causes a false sense of security in readers.  We think we know what's going to happen but are therefore totally unprepared for the reality we read.  Also Cummins' carefully selected words increase in importance as they and the animals lessen in number.  Here is a sample passage.

Wait a second.
It seems there was just a hungry lion,
a turtle, only the floppy-eared rabbit,
a frog, a bat, and a pig.
And apparently?
No one else.


Rendered throughout in brush marker, gouache, graphite, colored pencil, and charcoal readers believe when looking at the front of the dust jacket, they are seeing a gathering of happy animals regardless of the title.  The back, on the left, foreshadows the ending complete with a comment from Caldecott Medal and Honor winner, Jon Klassen which sums up the narrative succinctly.  Different than the jacket, in the resplendent shade of the lion's mane the canvas for two circular images is found on the book case.

On the front is the lion.  Smiling with a secret only known to this individual animal (and readers once the book is finished) a second picture is loosely framed on the back.  The opening and closing endpapers are patterned in vertical stripes in two hues of yellow and orange.  A single glowing light bulb hangs over the text on the title page.

One of my favorite illustrations is of the hungry lion on the left and three animals on the right.  Completely relaxed with closed eyes and resting, the lion is whistling.  The other animals' moods are varied.  One is smiling, another looks definitely concerned and the third is looking straight ahead, expressionless.  This image speaks volumes.  What is going on?!


A Hungry Lion or A Dwindling Assortment of Animals written and illustrated by Lucy Ruth Cummins is a guaranteed to be a favorite read aloud.  It will astonish you over and over again even when you know the ending.  That is the sign of a remarkable read.  The wit found in the blend of text and images is meant to be shared often, at every opportunity.

To discover more about Lucy Ruth Cummins and her artwork please visit her site by following the link attached to her name.  At the publisher's website are several interior pictures including my favorite one.  In late 2014 Publishers Weekly had an article about this debut picture book.  Lucy Ruth Cummins is interviewed at Picture Book Builders and at Quill & Quire.  This title is featured at author, reviewer and blogger Julie Danielson's blog, Seven Impossible Things Before Breakfast.