Classic Composition In Black And White

The words in some books reach out of the pages painting landscapes from particular moments in specific places making you feel as if you've recently traveled in a time machine.  In other titles the characters' physical qualities and nuances of their personalities are described in such intricate detail you feel as though they are next to you; you are sharing the same space and air as they are.  As the sentences shape a narrative it becomes your story. 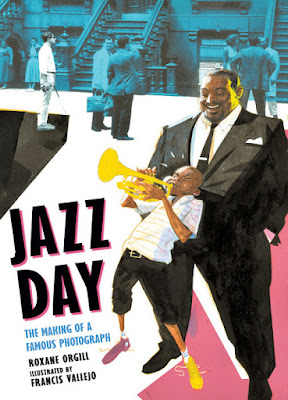 In the best kind of books all these things happen.  If you are fortunate another extraordinary experience will occur.  You will feel a musical beat or hear the soft sounds of notes as surely as if you are listening to it individually or with a larger group at a concert or club.  With each reading of Jazz Day: The Making Of A Famous Photograph (Candlewick Press, March 8, 2016) written by Roxane Orgill with illustrations by Francis Vallejo the sense of place and time, the characters and their stories and a steady rhythm shaped by the words and images will envelope you, becoming stronger and sweeter.

This anthology of twenty-one poems sings of a singular historic event.  In the summer of 1958, in the month of August on the twelfth day, around ten in the morning, a group gathered.  Word had spread to all the collective corners of the jazz world about a picture to be taken for an addition, The Golden Age of Jazz, in a forthcoming issue of Esquire.

Photographer Art Kane, who proposed this crazy idea to the magazine, selected the venue in Harlem.  He knew what he wanted for a background.  He knew the kind of lighting he preferred.  All he needed were musicians.  And they arrived; fifty-seven men and women.

In the first two poems we learn of the man behind this legendary photograph and his attempt to organize a group more intent on friendly catch-up conversation than picture making.  Attention is given to Milt "Fump" Hinton, a bass player and photographer himself.  Twelve neighborhood boys (the same number as the date) line the curb and become a part of the final visual, the farthest one on the right is sitting next to Count Basie, who is heralded in a separate poem.

Porkpie hat creations by Lester "Pres" Young, pianist and composer, Mary Lou Williams, and snappy dresser and perpetually late, Thelonious Monk, star in lyrical portraits.  An alphabetical nod to attire wore by the greats, a chase, the horn of Rex Stewart, the missing Duke Ellington (Where was he?) and the appearance of songbird Maxine Sullivan fill pages with melodious praises.

A girl child leaning out a window, Eddie Locke and his drum, a famous foursome, Willie "the Lion" Smith sitting on a step, the defining camera click, a finished print product, a glad youth and a closing nod to the beginning round out these tuneful tributes.


As free and inventive as the musicians and their music author Roxane Orgill has penned poems be-bopping, chasing, riffing and running off the pages. Pauses and rests are inserted through line placement.  Dialogue and truths permeate the verses; evidence of Orgill's extensive research, her more than twenty years as a music critic and passion for music.  For several of the poems she gives a name to one of the twelve pictured boys extending the experience of the photograph.  Here is one of the poems.

Hat
Alfred, a boy
Nice wool felt
Two-inch snap
Brim
Count's too beat
To give chase
When
Nelson nabs
His bonnet
I'm
On it quick
Down the block
"Hand it over, Nelson, before I ---"
Buff the felt
Set the snap
Brim
"Your hat, Count Basie."


Upon unfolding the dust jacket the unique illustrative style supplied by Francis Vallejo is immediately apparent.  A striking layout spanning from flap edge to flap edge, left to right, gives readers a panoramic view of the street in Harlem.  Combining actual images with those rendered in acrylic and pastel makes us feel like we can walk right into the scene.  Two colors, yellow and black, recreate the row of brownstones on the book case.  One is in black with yellow outlines representative of Number 17, on the north side of 126th Street; the place where people stood as the picture was taken.  The opening and closing endpapers are in a soft black.  An initial title page with the words, Jazz Day, showcases a signature single hat.

Many of the illustrations, placed on heavy, matte-finished paper, wrap around the poems spreading from edge to edge across two pages.  Text appears in columns on one side or the other, above a picture or on a page opposite a single page visual.  For the poem, Some Kind of Formation, Please!, a fold-out of the actual photograph, Harlem 1958, is featured.

Light and extended, almost geometric, shadows and shapes work to great effect in the illustrations.  Sometimes Vallejo will fade his background to draw our attention to the more predominant textures and hues of the people he depicts.  His perspectives create emotion and motion.  Do you hear the voices of the people present?

One of my favorite illustrations of many enhances the poem, Hat Alfred, a boy.  The text is shown on the right in black on white.  To the left are a series of four images, nearly square.  In the first Count Basie is sitting on the curb resting at the end of the row of boys.  Nelson is sneaking up behind him.  In the second Nelson has grabbed the hat, gleefully sprinting down the street with Alfred in pursuit.  Alfred catches Nelson, securing the hat in the third visual.  In the final picture Alfred, with reverence, returns the hat.  The facial expressions on the three people are wonderful.

History, poetry, photography and music mesh magically in Jazz Day: The Making Of A Famous Photograph written by Roxane Orgill with illustrations by Francis Vallejo.  (This is Vallejo's first book.) Read it alone, silently or aloud, or even better share it with others that they may relive this one-of-a-kind day feeling and experiencing the friendship, the respect, and the chats between the musicians.  It was a sultry summer day alive then and now.  In the front of the book is a Contents listing the Introduction, The Poems, an Author's Note, selected Biographies, Harlem 1958: Beyond Esquire, Source Notes and Bibliography.  This title has received five starred reviews from School Library Journal, The Horn Book, Booklist, Kirkus and Publishers Weekly.

To learn more about Roxane Orgill and Francis Vallejo and their work, please visit their websites by following the links attached to their names.  If you follow the links to Candlewick Press and Penguin Random House, you can view different interior illustrations.  TeachingBooks.net includes pronunciations of Roxane Orgill's name and Francis Vallejo's name.  Author, reviewer, and blogger Julie Danielson highlights this title and artwork at Seven Impossible Things Before Breakfast.  Enjoy the videos.