When They Were Sleeping

In between dogs in my life, decades ago, I was asked and agreed to watch over a chocolate Labrador puppy when his humans were out of town.  He was a little over a year old and, as you can imagine, full of energy.  We went on several long walks every single day in addition to lunch time strolls before I headed back to school in the afternoon.  His appetite was voracious...for everything.

Coming home from work one day, I was surprised to see what appeared to be white suds all over the kitchen were the puppy was residing.  He had decided to snack on the bean bag chair his humans had left for him.  The stuffing must have been downright delicious as evidenced by our next several outings.  Within the next twenty-four hours some fluke of fate caused flooding in our basement.  A hose was extended from the basement, along the edge of the kitchen wall, and outside the back door to drain the water.  In short order the basement was not the only thing flooded.  Perhaps our canine friend thought the hose was some new kind of sausage. 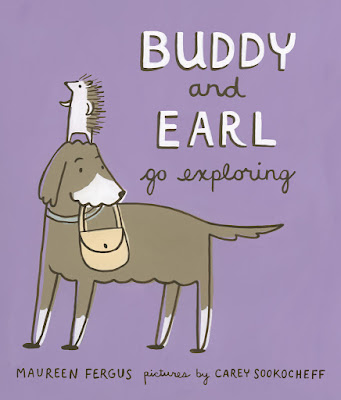 To him this temporary state of residence seems to have been some kind of restaurant in which he needed to pass culinary judgment.  In a companion to Buddy and Earl, released in August 2015, author Maureen Fergus and illustrator Carey Sookocheff have collaborated to give us Buddy and Earl go exploring (Groundwood Books, House of Anansi Press, March 15, 2016).  These two best buds, like my puppy pal, see life through an entirely different lens than their humans.  This is what elevates the laughter factor through the proverbial roof.

The day had been long and full of adventures.  Buddy was looking forward to a good night's sleep.

Buddy's humans, Meredith, Michael, Mom and Dad are getting ready for bed.  Earl is tucked inside his new home above Buddy's pile of blankets as the household settles into slumber.  As Buddy is starting to head to dreamland, Earl whispers a goodnight and asks him for a bon voyage wish.

When Earl stops he is amazed to see surroundings which seem familiar.  When Buddy whispers the truth, Earl nearly faints to think Buddy could keep up with him as he traveled.  (I have to stop a moment because I am laughing so much, I can't type.)  Earl declares as long as they are here, they should

As Earl warns of an ogre, discovers a beautiful lake next to a towering mountain, snacks on gourmet goodness and urges Buddy to save a damsel in distress from a monster, we are humorously aware of the truth as is Buddy, only he is not laughing.  He has found another hideous beast.  As our heroes find their way back to bed, a final wordless image foretells of another episode destined to the archives of hilarity thanks to this unpredictable, creative twosome.


The timing and word choices written by Maureen Fergus have fashioned one of my absolute favorite comedy teams in children's literature.  The conversational exchanges between the dog, Buddy, and Earl, the hedgehog, are a hilarious contrast between the truth and a perceived reality.  The blend between these chats and the straight narrative are superb.  Here is a sample passage.


The matching dust jacket and book case in purple, black, white, brown and tan with a simple design and layout is the ideal opening for the narrative.  Clearly Earl is the leader of this adventure but Buddy, looking back, is not quite certain where they are going.  And why is he carrying a purse?

To the left, on the back, Buddy is shown in a square image framed in the purple background.  His nose is to the ground sniffing a trail of unknown objects. A complimentary color of pale yellow covers the opening and closing endpapers. Buddy with Earl on his back appear before the title page and verso.  There is a clue, in a small illustration, of things to come on the verso.

Carey Sookocheff renders her illustrations in this title

using acrylic gouache on watercolor paper and assembled in Photoshop

giving a clean look to each one adding shades of blue and gray to her original palette as shown on the jacket and case.  She alters between a small image surrounded by white, a full page, edge to edge, and double page pictures.  Her perspectives draw the reader right into the action of the story.  Her representations of Earl's perceptions definitely heighten the fun.

One of my many favorite illustrations is when Earl salutes Buddy as he gets ready for his trip.  He is standing outside his home with the wires and wheel in the background.  Buddy is looking downcast, concerned with where his friend is going and when he will return.  He does not know at this time what we know.  Sookocheff brings us close to the two characters' faces.


Buddy and Earl go exploring written by Maureen Fergus with pictures by Carey Sookocheff will endear readers to these characters, their lives and adventures as much as, if not more than, the first title.  Read this book aloud for a maximum laughter factor.  I guarantee you will have your audience rolling on the floor in laughter.  You might want to have a dog and hedgehog puppet ready for a little reader's theater.

To learn more about Maureen Fergus and Carey Sookocheff and their other work please follow the links attached to their names to access their websites.  By following this link to the publisher's website you can view interior images.  Maureen Fergus chats on the podcast, Storybook Spotlight, about Buddy and Earl.
Posted by Xena's Mom at 10:14 PM