We all know and admire people who look at the world as one large living, breathing machine consisting of a nearly infinite amount of parts working together.  They assess every situation seeking solutions.  There are no boundaries or limits to their imagination.  They are always thinking outside the box. 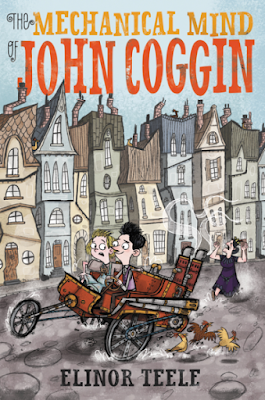 In The Mechanical Mind of John Coggin (Walden Pond Press, April 12, 2016) written by Elinor Teele with cover and interior illustrations by Ben Whitehouse, two orphans, an older brother and his younger sister, must use their best qualities to survive the clutches of a dastardly relative. A family ritual of storytelling bolsters their hearts.  What each one does and would do for the other is the soul of this story.

Chapter 1
Once upon a time there was a boy who made coffins.  His name was John Peregrine Coggin, and the Coggin family had been manufacturing wooden caskets in the city of Pludgett for over a hundred years. ...

With this introduction and the beginning of chapter one, your mind is already filling up with questions.  Who was talking to John?  Where are they?  When is this conversation taking place?  You are intrigued to the core.

John, now eleven and his sister Paige, nearly seven, have been living with his Great-Aunt Beauregard since the death of their parents when he was five.  Unfortunately with his brilliant mind and his aunt putting him to work long hours at an early age, he has become the best coffin maker in the swampy community of  Pludgett.  He detests making caskets, yearning for some kind of escape from what promises to be a life of drudgery for both he and his sister.  An unusual impromptu trip away from the shop to a hotel by the sea has the siblings hopeful for a brighter future but then again, this is Great-Aunt Beauregard in charge of the outcome.

Her proposals have John saying things he has never previously said to her face.  The children make an escape out of a locked room with the assistance of a new friend, Boz, an exceedingly long-winded, walking-dictionary and mischief-making scamp.  Where might their destination be, you ask?  They are headed for the company of The Wandering Wayfarers, a circus.  A non-functioning steam powered engine named Autopsy and an unfortunate episode with a local official's newfangled automobile have the children on the run again.  To make matters worse Great-Aunt Beauregard has an uncanny knack of locating them wherever they go.

John, Paige and sometimes Boz, find themselves in one calamitous mess after another, exploding chicken poo being the least of their worries.  Each situation and the characters they meet add to the escalating precariousness of their future.  Will forces for good, ingenuity and teamwork prevail against greed and deceitfulness?  Only a dragon, a shaggy dog and a flying coffin can supply the answer.


As soon as you read the first page, you are drawn into the story by the request for a story.  Without missing a beat Elinor Teele draws us willingly into places seemingly familiar but completely unique, describing the communities, residences and other modes of transportation in which our main characters find themselves.  The phrase, a cast of colorful characters, applies with gusto to this narrative.  John and Paige find themselves thrust not always by choice but more due to circumstances into the presence of diverse and multi-dimensional people.

John's thoughts, the conversations between all the characters and the language each uses create highly engaging and often comedic responses in readers.  You will find yourself mentally assigning voice qualities to the characters based upon their personalities.  Boz's persuasive, embellished observations and suggestions, Great-Aunt Beauregard's boisterous outbursts, Maria Persimmons quiet, loving words, Leslie's arrogant assumptions and Miss Doyle's wise counsel as well as the circus performers requests, insights and advice supply non-stop entertainment, a montage of ingredients in the siblings' stew of life.  Here are some sample passages.

And when that didn't work---and granaries and grannies took to mysteriously disappearing overnight---the settlers began building hovels on top of the ones that were sinking.  The whole city was a layer cake of decay.
Of course, living in a city built on a swamp meant the air smelled like rotten eggs and mosquitoes were the size of pumpkins.  But no one ever complained.  Pludgett citizens were terribly proud of Pludgett.

"Building a story is like any other invention, John my lad," he would say.  "Guts and gung-ho at the beginning, struggles and surprises in the middle, and the glorious moment when everything comes right."

When John found enough balance to peek back at the fence, he could just spy the top of the canary in Great-Aunt Beauregard's hat.  It appeared to be screaming.
"JOHN PEREGRINE COGGIN! I WILL ROAST YOUR GIBLETS FOR THIS!

He stood and began touching his toes.
"One, two, one, two.  A working bakery like this should give me exactly the capital I need to convert my castle at Howst into a showpiece for investors." He threw back his shoulders and pounded his chest for emphasis.  "Harry, you may not know it yet, but you are looking at the next real estate king of this country."
Then, as a fitting finale, Leslie farted.

"Euripides!" Boz blasted.  "By George, I think you've got it!"
John grinned, happiness rising in him like yeasty bubbles.


The Mechanical Mind of John Coggin written by Elinor Teele with cover and interior illustrations by Ben Whitehouse is a stellar story of high adventure.  You are advised to be prepared to read on the edge of your seat from cover to cover in a single sitting.  As you move with the primary characters from escapade to escapade you, like them, will understand (or have your beliefs confirmed) there is more than one way to define family.

If you desire to learn more about Elinor and this debut title, please follow the link attached to her name to access her website.  Please stop by the publisher's website to read an excerpt.  An activity guide, writing exercises, is available here.  To read the other posts by bloggers in this tour follow this link to the Walden Pond Press blog.


To be able to chat with Elinor through a series of questions is an honor.  I know you are going to be as delighted as I am with her answers.


When I read a book as engaging as The Mechanical Mind of John Coggin (I did consume it in one sitting on a Sunday past.) I find myself marking passages with sticky notes.  One of the first pages I marked in this title referred to a rather vivid description of the town of Pludgett where John and his sister Page live.  I’m curious to know whether the world of Pludgett and the surrounding towns came first to you or did one of the characters present themselves to you?

It’s been so long since the first draft that I had to go back and do some ferreting! John and Page are loosely based on reality, so they were in my head from the beginning.
But I always had Dickens in mind when it came to creating place. The opening passage of Bleak House and the description of the Thames in Little Dorrit are particular favorites of mine. I wanted Pludgett to be a city that reflected John’s trapped imagination—grime, grit, repetition, and layers and layers of rotting thinking.
My original notes read:
“Unhappy, unhappy. Grind, grind, grind. Inventiveness frowned upon. Like rats in a maze, directed over the same lines again and again.”

Within the body of the story there seems to be a blend of the past, without our current inventions, with more iconic text.  An example is your description of John as a lean unkeen coffin machine.  Was this blend intentional and would you tell us why?

Yep, it’s intentional. Since I was writing the book for my relatives, I wanted Coggin to have some of the same flavor of The Princess Bride, a family favorite—
·        “Life is pain. Anybody that says different is selling something.”
·        “Never get involved in a land war in Asia.”
And it seemed fitting that John, whose imagination is boundless, shouldn’t be restricted by historical “accuracy” in the tone or text. The book is about busting open the rulebook.

From your bio on your website you have a keen interest in theater and the study of Anglo-Saxon literature.  Did this influence the character of Boz being verbose in exceedingly descriptive language with a flair for the dramatic?

Probably, but my siblings will tell you that verboseness and the tendency to be a ham were obvious from my early years! Theatre and my studies in literature just seem to have compounded it.
I don’t adore all my characters, but I do have a soft spot for Boz. Like Gonzo in The Muppets or Merlyn in The Once and Future King, he doesn’t belong to a particular time period or setting—he’s a master of doggerel and servant of none. I hope folks have fun with the Easter eggs (cultural references) embedded in his speech.

Did you have to do much research to create the scientific thinking of John’s mind?

Some. I’ve never been good at engineering principles—that honor belongs to my father and my grandfather—and it took me a while to sort out internal combustion. I’m absolutely certain that I’ve made a few clangers in my descriptions. (My apologies to my science teachers!)
But it was intriguing to discover how John’s interest in “how things work” dovetailed with my own exploration of “how writing works.” The two disciplines aren’t that far apart. You have a large variety of component parts that you must put together in a particular order. One thing follows another, and small structural mistakes can be extremely costly.

I write in an old chicken coop. It still has the faint scent of its former inhabitants, but it’s perfectly serviceable.
There’s no special schedule, other than achieving a certain word count by the end of the week. Hours don’t count—you can stare at the ceiling for a day and call it work. For my own sanity, I have to get something on a page.

Did your work in photography help in creating the places in this book?  Are they based on any actual settings?

Probably not. When I’m taking photos, I’m thinking about framing and light and technical bits; I’m not always concentrating on how to describe the scene in front of me. Sometimes I wonder whether it’s hindering more than helping. But let’s give it the benefit of the doubt—photography has taught me to be more careful about noticing hidden corners.
And, yes, some of the places are based on actual settings. The street of bakeries where Maria lives is a mash-up of a backpacking trip through York in the U.K. and Hansel & Gretel’s stumble through the forest; the lunar landscape of Miss Doyle’s archeological dig was prompted by a memory of New Zealand; and the train scenes harken back to a cross-country trip through Canada when I was very young.

Is there anything else you would like readers to know?

The Mechanical Mind of John Coggin has taught me nothing is perfect.  Every invention is an adventure.  Every book is about trying something completely new and hoping to hell it works.  I hope I've written something kids will enjoy, but if I've failed, that's okay.  Life would be awfully boring with no mistakes.