We are stories.  As long as there have been people there have been stories of every form and size.  They define us as individuals and as complete cultures.  They help us to make sense of those things having no apparent explanation.  They keep us grounded and allow us to soar into the cosmos. 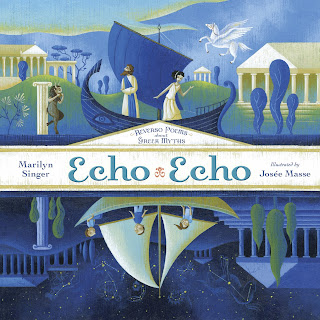 In ancient Greece a body of literary work, their myths, was a form of religion for many.  The gods and goddesses were studied and worshiped.  Heroes and heroines and their acts were woven into the fabric of these stories.  In their third partnership, author and poet Marilyn Singer and illustrator Josee Masse, offer readers another collection of poetry.  Echo Echo: Reverso Poems about Greek Myths (Dial Books for Young Readers, February 16, 2016) are fourteen poems in pairs, eleven showcasing couples, a twelfth about a woman who released woes into the world and two others opening and closing the stories within.

An Age of Marvelous Myths

Ancient Greece:
An age of marvelous myths,
gone, but not forgotten.
Heroes that rise and fall. ...

...Heroes that rise and fall,
gone, but not forgotten.
An age of marvelous myths:
Ancient Greece.

As our eyes read the words left, top to bottom, and right, top to bottom, two columns and two poems, their order inverted, meanings shift.  Points of view may change along with the speakers.   We find ourselves speculating about the altered circumstances.

We come to understand why, regardless of an admonishment, Pandora's curiosity overcame her good sense but in turn something prompted her to hold hope.  In this instance wisdom overcame weakness.  After a competition an angry loser turns her opponent into a spider, a mighty ruler's touch creates value except in the one thing he treasures most, and a warrior wins a battle no one could possibly win; these three show us the imperfections in mortals, immortals and monsters.

In flight two fall, one eager for glory and the other failing to heed words of wisdom.  Love fades, love fashions life, loves races to victory, love cheats death and loses to death again.  A single thread saves one and a succession of fourteen others.

Gods and Mortals
These myths
make sense of
the world.
We--- ...

...We,
the world,
make sense of
these myths.


As in the previous two titles readers will be astounded at the consummate skill of Marilyn Singer in writing thoroughly unique poems using the same words, reversed in order, with punctuation and capitalization changes alone.  She portrays the soul of these myths with her exquisite selection of words, each line's length unfolding the events with intention.  Her understanding of the myths through research is highly evident.  For readers not familiar with a particular story at the bottom of each set of poems, she includes a brief explanation.


On the matching dust jacket and book case Josee Masse presents readers with a color palette she continues to use throughout the title, hues of blue, white, greens and shades of golden yellow and orange.  The image on the front depicts ancient Greece on the top and modern times on the bottom.  This is the illustration for the first poem, with the bottom becoming the top.  To the left, on the back, text and images highlight the first two reverso books. On the opening and closing endpapers two different shades of the golden yellow and orange are used.

Rendered with Liquitex Acrylic on Strathmore 500 series bristol sheet---2-ply vellum the illustrations are as fluid and flawless as the poetic stories they interpret.  Fine lines, exquisite detail and the interplay of shadow and light are breathtaking.  Each picture is two wholes becoming one, a mirror of the two reverso poems on the opposite page.  They are separate but they overlap at the same time.  Without hesitation we are requested to stop and look at every single one.

My favorite image is for the poems Arachne and Athena.  On the left the predominant color is golden.  On the right it is blue.  We see two rooms with arched doorways on the far left and far right.  A single tapestry joins the goddess Athena (on the left) holding her spear with an owl depicted on her side of the weaving and Arachne (on the right), her portion of the fabric a spider web.  Beneath her attire are the legs of a spider.  Their facial features express the anger of one and the fear of the other.


Echo Echo written by Marilyn Singer with illustrations by Josee Masse is a beautiful volume of this singular style of poetry.  With the popularity of Greek myths, this will find a ready audience.  They can most assuredly be enjoyed silently but when you read them aloud you are transported back in time.  You will want to have this book on both your personal and professional shelves.  An author's note at the back offers further information about Greek myths, reverso poems and several resources.

To learn more about Marilyn Singer and Josee Masse and their other work please use the links attached to their names to access their websites.  If you wish to use an educator's guide for all three books please follow this link.  Marilyn Singer writes about reverso poems and her three titles at Brightly.
Posted by Xena's Mom at 7:48 PM