A Parade Of Poetry

It's hard to believe the 20th anniversary celebration of National Poetry Month has nearly come to a close.  It's been twenty-nine days of showcasing poetry, reading and writing poems, creating spine poetry thanks to promoter teacher librarian Travis Jonker, blogger at 100 Scope Notes, and the true-blue fun of Poem in Your Pocket Day.  Although any day of the year is a great day for poetry, this month's focus wins more readers and writers to this literary form. 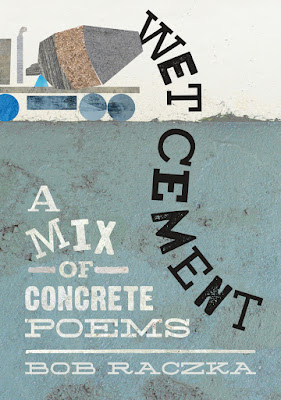 It's a time to direct attention to beloved favorite poems, classic collections and spotlight wonderful new titles. On March 8, 2016 three books were released.  The first of these, Wet Cement: A Mix Of Concrete Poems (Roaring Brook Press) is written by Bob Raczka.

In the introduction Raczka explains concrete poetry to readers with an emphasis on using words to literally paint a picture on a page.  The words in a concrete poem form the item being described in the poem.  In this collection he takes it further by using the letters in the poem's title to depict that word.

Twenty-one poems, shown in black on white and white on black, help us to soar if only for twelve seconds, play games, search the night skies and peer into our closets. We pause at the baseball diamond, run after tiny creatures of the night and marvel at the miracle of our planet in the cosmos.  We enjoy the best of two seasons, gasp at a summer storm's display and let a possession sail the air waves.

Bob Raczka asks us to vary our pattern of reading.  We find ourselves not only reading left to right but in a circle, bottom to top, connecting words as if in a puzzle, around curves, holding the pages in front of a mirror, right to left and sideways and following a maze.  The poems' titles, as well as the poem itself, are placed to coordinate a complete image.  Here is a sample poem with a title. 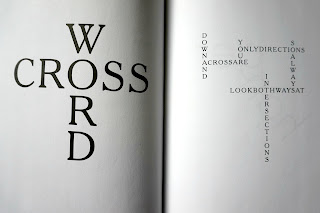 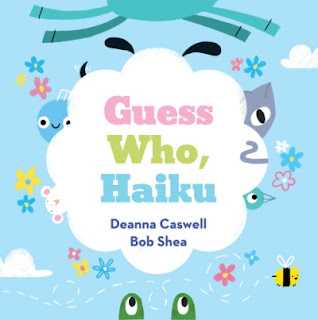 For younger readers and those young at heart Guess Who, Haiku (Abrams Appleseed) with words by Deanna Caswell and pictures by Bob Shea is a lively look at the ancient Japanese poetic technique. Using the five syllables, seven syllables and five syllables format for three lines of poetry, readers are invited to guess the animal being described.  Ten poems playfully portray creatures of all sizes.

Here's a haiku just for you!

Can you guess who from this haiku?

With a page turn we discover the answer in two words.  For the next poem the previous animal sends out the request for us to use our thinking skills.  This pattern continues until the final poem.

With this repetitive sequence Deanna Caswell supplies a pleasing, beckoning rhythm.  In an author's note at the back she defines a portion of the word haiku as an explanation for her particular poems.  She cheerfully requests readers to try reading the lines of the poems with one of the lines removed, asking us how or if this will change the results.


Using a palette of pastel colors with bright accents, Bob Shea's images charmingly enhance this gathering of haiku fun. Portions of some of the animals appear on the front book case.  On the opening and closing endpapers small circular hues feature black drawings of nine of the animals in a repeating design.

The text for each haiku poem is displayed in a different colored font on white with a pictorial clue pictured below.  With a page turn Shea has placed the animal on a vivid canvas usually including something from the clues in this illustration.  You can't help but smile at these pictures. In their third collaboration (Step Gently Out and Sweep Up the Sun) poet Helen Frost and photographer, painter and illustrator Rick Lieder explore another marvelous aspect of our natural world. Among a Thousand Fireflies (Candlewick Press) takes us to an evening when two beetles seek to find each other.  The combination of these two artists' talents creates a breathtaking illuminating view.

In a summer meadow
near the river,
as night's first stars
blink on,
a firefly
steps
into a flower.

She waits and watches surrounded by more lights blinking on and off than would be possible to count.  She is searching for one particular cadence, a secret code.  It hardly seems possible she will find it.  But she does.

She answers with her own series of glowing beats, matching what she has seen.  She seeks acknowledgment.  He approaches.

Helen Frost with word choices and punctuation replicates the flashing of fireflies with her phrases.  If you read the text aloud, it's almost as if you are seated outside on a balmy summer's night, watching these tiny creatures work their mating magic.  You hardly dare breathe for the beauty her words carry.


When you open the dust jacket two photographs, on the back across the spine to the front, blend to become a single moment.  So exquisite is the detail and lighting you wonder how many pictures were taken to capture these exact visuals. A single shade of blue covers the book case.  On the front a pair of fireflies is embossed in the center.  On the opening and closing endpapers two more photographs reveal the intricacies of these delicate beings.

You will find yourself gasping at the splendor seen on every new page.  Rick Lieder varies his perspectives bringing us close to the fireflies and then stepping back to show us how they move and light the night.  The style of softening the background leaving only certain portions highly focused is a highly sensory experience for readers.

These three titles, representative of three distinctive types of poetry, Wet Cement: A Mix Of Concrete Poems written by Bob Raczka, Guess Who, Haiku written by Deanna Caswell with illustrations by Bob Shea and Among a Thousand Fireflies written by Helen Frost with photographs by Rick Lieder have one thing in common.  They are all brilliant.  I highly recommend adding them to your personal and professional collections.  Pause on every page.  Read them aloud.  Repeatedly.

To learn more about Bob Raczka, Bob Shea, Helen Frost and Rick Lieder please follow the links attached to their names to access their websites.  At the Candlewick Press website you can view an interior image from Among a Thousand Fireflies.  Enjoy the book trailer.